a Praise of Tobacco, a Ruse, Dom Juan, Sganarelle 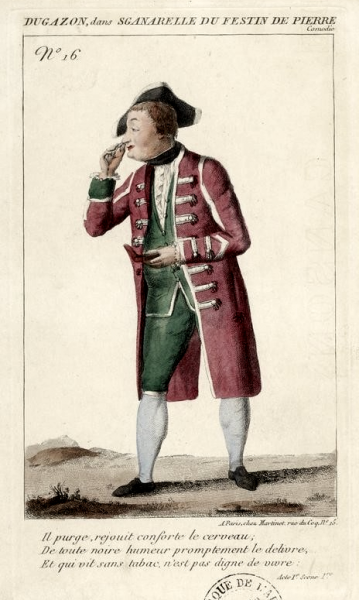 Above is an image of Sganarelle praising tobacco. Molière‘s Dom Juan is an obscure play. As the curtain lifts, Sganarelle,  Dom Juan’s valet, is praising tobacco. A critic called this praise of tobacco an encomium, but a paradoxical encomium. I believe I found this information in a book or article by Patrick Dandrey.

I read several books on Molière before entering a sabbatical I would devote to writing my book on Molière. It didn’t happen. The Chair of my department called me in and asked me to prepare two new courses in areas I was not familiar with. I could not say no because I feared him.

When I returned to work, I realized that during my absence, no one upgraded the language lab component. It took me two months to upgrade it. So, my workload triggered a serious episode of Myalgic Encephalomyelitis. I was vulnerable and accepted to move to Sherbrooke. That was a mistake. One should not make serious decisions when one is unwell.

However, here I am preparing my final will. My mind took me back to what had been my home: Antigonish, Nova Scotia.

My University eliminated me, using a ruse, because of an illness I could manage, given normal circumstances. I can work on a full-time basis, if assigned a normal load of courses. What my university did to me was very wrong.

So, we are returning to Dom Juan and specifically to the relationship between Dom Juan, the character, played by La Grange, and Sganarelle, Molière’s role.