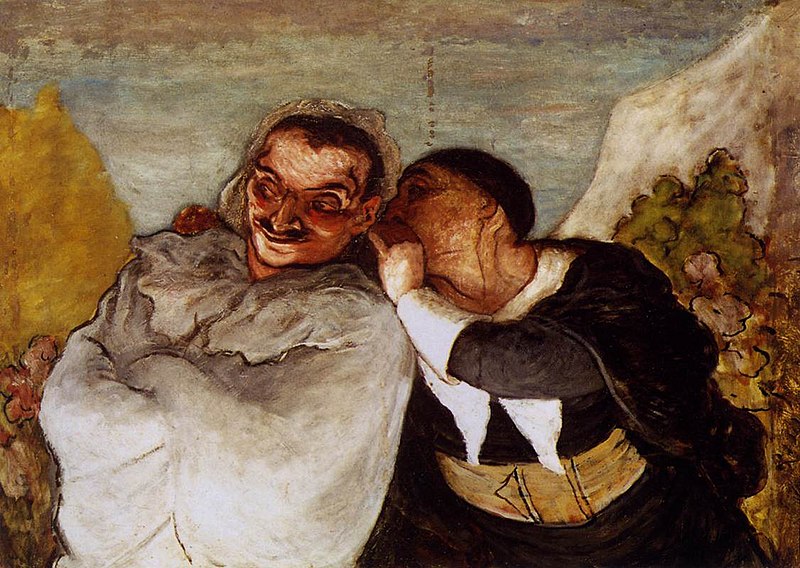 Our dramatis personæ is

The scene is at NAPLES.

Act Three is very short, but dense. In Scene One, Hyacinte and Zerbinette, who has been bought back, compare their destiny. Zerbinette is not married to Léandre, but she is not too fearful. She would like a pledge which “little ceremonies” will provide.

Il doit lui en coûter autre chose que de l’argent; et pour répondre à son amour de la manière qu’il souhaite, il me faut un don de sa foi qui soit assaisonné de certaines cérémonies qu’on trouve nécessaires.
Zerbinette à Hyacinte (III. i, p. 40)
[He will have to give something else besides money, and for me to answer to his love as he wishes me, he must give me his word, with an accompaniment of certain little ceremonies which are thought indispensable.]
Zerbinette to Hyacinte (III. 1)

La ressemblance de nos destins doit contribuer encore à faire naître notre amitié ; et nous nous voyons toutes deux dans les mêmes alarmes, toutes deux exposées à la même infortune.
Hyacinte à Zerbinette (I. i, p. 41)
[The similarity of our fate ought to strengthen the tie of friendship between us. We are both subject to the same fears, both exposed to the same misfortune.]
Hyacinte to Zerbinette (I. 1.)

Zerbinette believes a woman can keep the man she has chosen, but she fears the power of fathers.

On se peut naturellement croire assez de mérite pour garder sa conquête; et ce que je vois de plus redoutable dans ces sortes d’affaires, c’est la puissance paternelle, auprès de qui tout le mérite ne sert de rien.
Zerbinette à Hyacinthe (III. i, p. 41)
A change in a lover’s heart is not what we should fear the most. We may justly rely on our own power to keep the conquest we have made; but what I particularly dread is the power of the fathers; for we cannot expect to see them moved by our merit.
Zerbinette to Hyacinthe (III. 1)

Scapin reassures the young women. His role as a zanni is to help the young couple(s) of comedy. Octave believes he was betrayed by Scapin, but was he?

Scapin told Argante he was surprised his son married, but reason helped him. Besides, destiny had brought Octave and Hyacinte together. Destiny is powerful. When Argante recognizes his daughter, he says: “What an extraordinary coincidence!” Yes, Nérine insisted that Octave marry Hyacinte. Octave’s father was away. Octave was not forced to marry Hyacinte. He loved her and still does. And no, Argante will not have the contract cancelled and disinherit his son. Fathers are powerful, but they love their children. The power of fathers is very real, but so is a father’s love. When Géronte learns that Hyacinte is his daughter, a new and perhaps the real Géronte emerges.

Votre fille, Monsieur, n’est pas loin d’ici. Mais avant que de vous la faire voir, il faut que je vous demande pardon de l’avoir mariée, dans l’abandonnement, où faute de vous rencontrer, je me suis trouvée avec elle.
Nérine à Géronte/Pandolphe (III. vii, p. 51)
[Your daughter, Sir, is not far from here; but before I go to fetch her, I must ask you to forgive me for having married her, because of the forsaken state we found ourselves in, when we had no longer any hope of meeting you.]
Nérine to Géronte/Pandolphe (III..8)

Nérine is now moving to Géronte’s house and, in Scene Nine, Géronte invites his daughter Hyacinte to follow him home.

Octave just happens to come on stage. He remembers Scapin’s lessons and protests an arranged marriage, but he is brought to see that his Hyacinte is Argante’s daughter. Ironically, he has married the woman his father wanted him to marry.

As for Zerbinette, she apologizes to Géronte whom she has called a miserly father:

Monsieur, je vous prie de m’excuser. Je n’aurais pas parlé de la sorte, si j’avais su que c’était vous, et je ne vous connaissais que de réputation.
Zerbinette à Géronte (III. x, p. 53)
[Pray forgive me, Sir; I should not have spoken in that way if I had known who you were, and I only knew you by reputation.]
Zerbinette to Géronte (III. 11)

Mon père, la passion que mon frère a pour elle, n’a rien de criminel, et je réponds de sa vertu.
Hyacinthe (III. x, p. 53)
Father, I can answer for it that she is most virtuous, and that the love my brother has for her is pure.
Hyacinthe (III. 11)

In Scene Ten, Léandre who has just bought back Zerbinette tells her father that she was a local girl, captured at the age of four and that he has a bracelet that is proof of her identity. Argante recognizes the bracelet. It belonged to the daughter he lost when she was four-years old. In fact, he recognizes not only the bracelet, but also Zerbinette.

Mon père, ne vous plaignez point que j’aime une inconnue, sans naissance et sans bien. Ceux de qui je l’ai rachetée, viennent de me découvrir qu’elle est de cette ville, et d’honnête famille; que ce sont eux qui l’y ont dérobée à l’âge de quatre ans; et voici un bracelet qu’ils m’ont donné, qui pourra nous aider à trouver ses parents.
Léandre à Argante (III. xi, p. 54)
My father, you must no longer say that I love a stranger without birth or wealth. Those from whom I bought her have just told me that she belongs to an honest family in this town. They stole her away when she was four years old, and here is a bracelet which they gave me, and which will help me to discover her family.
Léandre to Argante (III. 12)

Scapin is not one to run out of resources. He decides he will feign approaching death, which should suffice. Two fathers having found lost daughters have discovered that destiny had arranged for the women they love to be the women they taught their sons should marry.

They all go for supper, supper being a normal ending for a comedy. We could call it the banquet.

As mentioned in Part One of Les Fourberies de Scapin (Scapin the Schemer), the young lovers are married, or nearly so, when the curtain rises. Yet, there is an obstacle to their marriage. Octave and Léandre’s father were absent when Octave married Hyacinte. But tradition demands a father’s consent. Father’s have responsibilities, one of which is to ensure their children marry a compatible spouse.

The fathers of comedies usually oppose the marriage of the young couple and do so to serve their needs. In the Imaginary Invalid, Argan opposes a marriage that will not bring a doctor into his household. He thinks of his needs only and not the needs of his daughter Angélique. He suffers from hypochondriasis, which is an illness. In the end, his daughter marries the man she loves, but on the condition that he become a doctor. Argan himself because a doctor, an attack on the profession.

However, ruining a daughter’s life is not an option. It’s a crime. There have been and there are happy marriages with a husband or a wife chosen by parents. These are exceptions rather than the rule. Hyacinte and Zerbinette will not share a bed with a man they loathe and bear that man’s children. The young women of comedy often threaten suicide and real women commit suicide. Their life has been taken away by a father and convents are very hard for most young women.

Géronte find their long-lost daughters and Scapin, disguised as a dying man, is forgiven by his victims. The characters of comedies resemble Reynard the Fox‘s animals. They can regrow lost parts. Bruin’s nose grows back. It could be that farcical characters do not feel hurt by the stick.

Comedy also favours endings where all characters are united again. Orgon empowers Tartuffe, but Tartuffe, not Orgon,  is punished. Tartuffe is a scapegoat, the pharmakos of ancient Greece.

But the main criticism addressed at society is the power fathers wield, their might. Do fathers have the right to control the life of a son or a daughter. In The Impostures of Scapin, Molière creates sons who fall in love with the woman they wish to marry. It all seems miraculous. However, these sons have no money. Fourberies allows Scapin to extract money from fathers. Géronte has to give money to Scapin, so his son can be returned to him, but he keeps repeating: Que diable allait-il faire dans cette galère. A galère is a galley ship. People found guilty of a crime were long condemned to row the galère for several years. Sylvestre tells Scapin that he does not want to have to deal with “justice.” Scapin tells him about the galère:

But to return to fathers, Scapin makes Argante say that he would not have the heart to break his son Octave’s marriage and that he would not disinherit him. That scene is brilliant. We must use reason when matters seem to have gone wrong. Yes destiny guides. Besides, a young man may make mistakes. Wasn’t Argante a bit of un homme galant, a womanizer, rather than a galant homme. Sganarelle tells Guzman that Don Juan is jeune encore. Octave was not altogether forced to marry Hyacinte, but Nérine insisted that he marry Hyacinte. Octave’s father was out of town and so was Léandre’s father.

My posts on Molière are not scholarly articles. I’m simply rereading all of Molière’s plays. I wrote a PhD thesis on Molière decades ago and published articles.