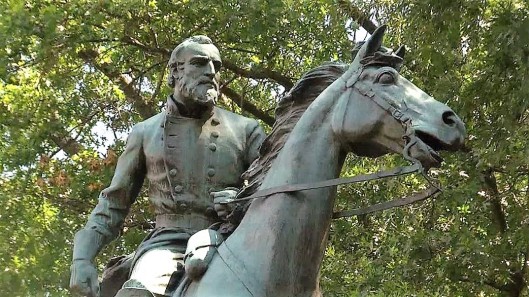 Ironically, as a Presidential hopeful, Donald J. Trump was endorsed by the National Rifle Association of America. He was also endorsed by the Ku Klux Klan, a hate group who participated in the Charlottesville events. By accepting such endorsements, President Trump may have emboldened the killers. Stephen Paddock (9 April 1953 – 1st October 2017) was shooting from the 32nd floor of a hotel, which allowed him to kill or wound many people and complicated the work of the police. Fifty-eight (58) concertgoers are dead and some five hundred were wounded. Mr. Paddock had booked a room at the Mandalay Bay. So far, authorities are at a loss in determining a motive. Stephen Paddock is “unknowable.”

I wish to offer my condolences to the family and friends of the victims of both tragedies. The Last Vegas shooting was by far the bloodier, but although the Charlottesville events did not lead to numerous deaths, they were the more meaningful tragedy.

Charlottesville and the American Civil War

The Charlottesville tragedy is particularly significant because it is rooted in the American Civil War, the worst of American tragedies. Less than a hundred years after Americans fought the American Revolution, secession was unthinkable. Robert E. Lee attended West Point and served in the United States army.

Yet, on “18 April, he [Lee] was offered by presidential advisor Francis P. Blair, a role as major general to command the defense of Washington.  He replied:

Mr. Blair, I look upon secession as anarchy. If I owned the four millions of slaves in the South I would sacrifice them all to the Union; but how can I draw my sword upon Virginia, my native state?

The Civil War (1861-1865) opposed the Union, the North, and the Confederates, or the South. When Abraham Lincoln was elected to the Presidency of the United States, in November 1860, slave states, the South, stood to lose “their way of life, based on slavery.”

First, the slave trade was abolished in 1807 by an act of the British Parliament (see The Slave Trade Act of 1807, Wikipedia). Second, in 1833, slavery itself was abolished (see The Slavery Abolition Act of 1833, Wikipedia). What had been considered morally acceptable when the slave trade began in the 16th century had become unacceptable. For centuries, captured Africans were packed like sardines in slave ships, the penultimate of which was the Wanderer. It sailed to Jekyll Island, Georgia delivering some 400 slaves. 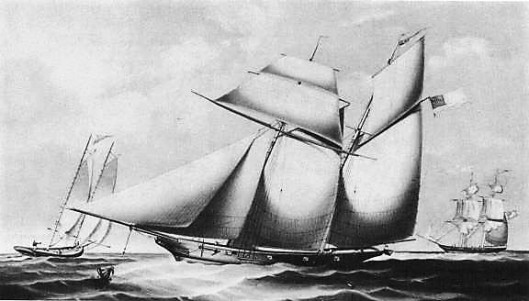 Wanderer in U.S. Navy service during the American Civil War (1861–1865), after her days in the slave trade were over. (Photo credit: Wikipedia)

Besides, the economy of the South was an agricultural economy. The South was rich, but unlike the Union, its economy demanded the cheap labour that had long been provided by slaves. As for the North, the Union, its economy was developing into an industrial economy. Furthermore, the 1840 a World Anti-Slavery Convention was held in Exeter Hall, a Masonic Hall. Exeter Hall is a synonym for the Anti-Slavery Society. Freemasons played a significant role in the abolition of slavery.  (See World Anti-Slavery Convention, Wikipedia.) To sum up, the South was doomed, but didn’t act. 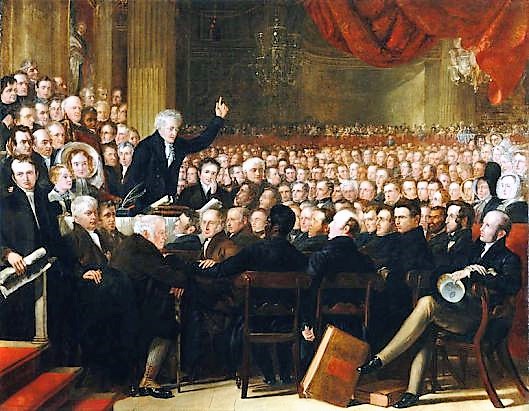 Yet, to some extent, the South was a victim of history. Slavery had not been looked upon as a wrong when the Atlantic Slave Trade began, in the 16th century. Slaves were brought to the Americas, packed like sardines aboard slave ships. They were then purchased by plantation owners who probably believed the blacks were not human beings, at least not altogether. The impact of the Age of Enlightenment on the morally acceptable was enormous and it put slavery where it belonged, in the wrong. However, vested interests and an ingrained state of mind, not altogether American, stood in the way of abolition. Abraham Lincoln himself feared for the South’s economy.

For instance, Lincoln asked Giuseppe Garibaldi to lead an army, but Lincoln knew about an agricultural crisis.

“Garibaldi was ready to accept Lincoln’s 1862 offer but on one condition, said Mr Petacco: that the war’s objective be declared as the abolition of slavery. But at that stage Lincoln was unwilling to make such a statement lest he worsen an agricultural crisis.” (The Guardian, UK)

It remains that a right, slavery, had become a wrong and that it could not be made a right again. It violated the United States’ very own Declaration of Independence, whose main author was Thomas Jefferson, a slave owner:

“We hold these truths to be self-evident, that all men are created equal, that they are endowed by their Creator with certain unalienable Rights, that among these are Life, Liberty and the pursuit of Happiness.”

But a black could not be transformed into a white. Once they were freed, former slaves were targeted by white supremacists. They became the victims of such groups as the Ku Klux Klan. After the Union won the war, Robert E. Lee himself could not see the blacks as equals. He thought the blacks should not be given the right to vote, which remained the case until the 1960s.

Slavery and Racism: the colour black

At this point, the necessity arises to distinguish between slavery and racism. One can assume that slavery is as old as the world and that slaves have not always been members of the black race. Arabs have enslaved white women. However, the blacks have long been held in contempt. In two former posts, I noted that Senator John C. Calhoun (18 March 1782 – 31 March 1850) did not favour the annexation of Texas by the “Union” because some Mexicans were métis (see Manifest Destiny, Wikipedia).

“We have never dreamt [sic] of incorporating into our Union any but the Caucasian race—the free white race.”

North-African philosopher Ibn Khaldūn (27 May 1332 – 17 March 1406) did not consider the black race as equal to the white race. He saw them as “dumb animals” and, therefore, candidates for slavery.

“Therefore, the Negro nations are, as a rule, submissive to slavery, because (Negroes) have little that is (essentially) human and possess attributes that are quite similar to those of dumb animals, as we have stated.” (See Racism, Wikipedia.)

Historically, the blacks have been considered the inferior race, “dumb animals,” and “submissive to slavery.” Had the whites and the blacks been put on an equal footing, there would not have been an Atlantic Slave Trade and plantation owners would not have grown very wealthy by making slaves do the work. French Count Arthur de Gobineau (14 July 1816 – 13 October 1882), a friend of Alexis de Tocqueville, also considered the black race as inferior to the white race. Gobineau is the author of An Essay on the Inequality of the Human Races, published in 1853. (See Related Articles #2)

The Abolition of Slavery

The Union won the war and slavery was abolished. By 1865, United States President Abraham Lincoln had already emancipated 3 million slaves. On the 1st of January 1863 Abraham Lincoln signed the Emancipation Proclamation, an executive order. On the 1st of January 1863. (See Emancipation Proclamation, Wikipedia.) However, slavery was not ended officially until the Thirteenth Amendment to the Constitution was passed by the Senate, on 8 April 1864, and by the House of Representatives, on 31 January 1865. A total of four million slaves were freed and Abraham Lincoln paid the ultimate price. He was assassinated on 15 April 1865, six days after Robert E. Lee “surrendered his entire army to Ulysses S. Grant at Appomattox Court House on April 9, 1865.” (See Robert E. Lee, Wikipedia)

But it had been a very bloody war:

Four years of intense combat left 620,000 to 750,000 soldiers dead, a higher number than the number of American military deaths in all other wars combined.

The Civil War left profound traces. It ended slavery, but racism grew and it intensified the discussion about the nature of the American federalism. After the Civil War, “power shifted away from the states and towards the national government.” (See Federalism in the United States, Wikipedia.) Several Americans fear their government. 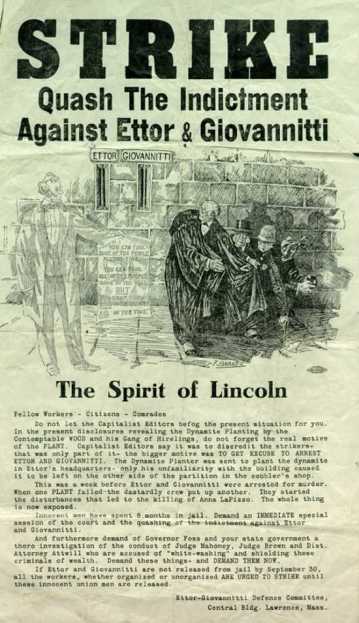 Flyer distributed in Lawrence, Massachusetts, September 1912. The Lawrence textile strike was a strike of immigrant workers.

President Trump was criticized for stating that there was violence on “both sides:” a hate group, who protested “legally,” and counter protesters. There was indeed a mêlée, but a permit to protest the removal of a statue of Confederate General Robert E. Lee (19 January 1807 – 12 October 1870) cannot justify the killing of Heather D. Heyer. Besides, there is violence and there is violence.

In other words, a hate crime was perpetrated in Charlottesville. Although the neo-Nazi group had a permit, twenty-year-old James Alex Fields drove a motor vehicle into a group of counter protesters killing 32-year-old Heather D. Heyer, a paralegal from Charlottesville, and wounding 19 other counter protesters. James Alex Fields killed, which is a crime.

May you rest in peace, Heather Heyer.

No permit can justify murder. The President of the United States therefore blundered by suggesting that a permit lessened James Alex Fields’ guilt. Words such as “permit” and “legally” were uttered by white nationalists to excuse their crime. One wonders whether a hate group should be provided with a permit to protest. In Charlottesville, a permit could and did invite disorder including murder. Freedom is not a free-for-all. Freedom and a free-for-all are poles apart.

“in a state of nature each person would have a right, or license, to everything in the world. This, Hobbes argues, would lead to a ‘war of all against all’ (bellum omnium contra omnes).” (See Related Articles #9)

As for the Las Vegas shooting, there is a sense in which Stephen Paddock also acted “legally.” In the United States, civilians are permitted to carry firearms. What could Stephen Paddock do with his collection of firearms? I suspect that when a President such as Donald J. Trump is in office, a person who has a collection of firearms may shoot and kill. It would be in the best interest of a Presidential hopeful to refuse an endorsement from the National Rifle Association and the Ku Klux Klan a fortiori. Deaths by gun are far too numerous and too many victims are blacks. The right to bear arms makes it difficult for a police officer to know whether he or she is addressing a person bearing arms. Not that police brutality is acceptable, but that in the United States police officers are caught between a rock and a hard place. It’s “a war of all against all.”