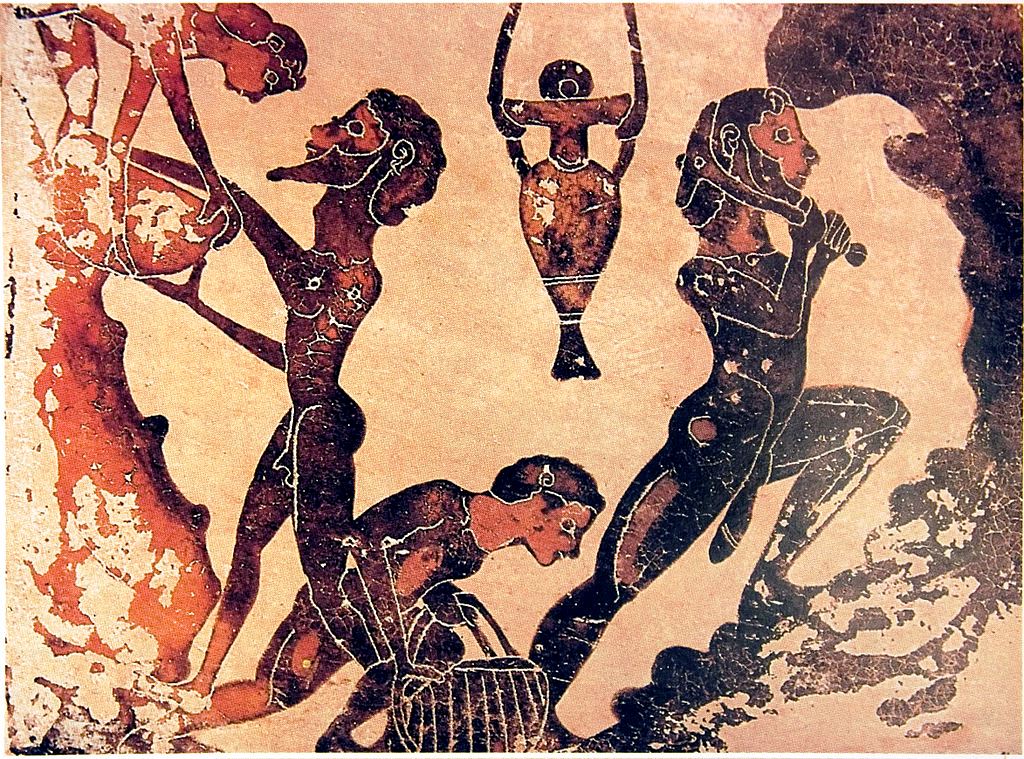 Slaves working in a mine. Ancient Greece. (Photo credit: Wikipedia)

We have looked at the abolition of slavery, but we have not discussed racism. The image placed at the top of this post shows that slavery is an ancient institution. In classical Athens two to four-fifths of the population were slaves. (See Slavery, Wikipedia.)

Not all slaves were born to slaves. Many slaves were persons held in captivity during a war, ancestors to our prisoners of war. Poet Horace‘s[1] (8 December 65 BCE – 27 November 8 BCE) father was a slave for several years. He had been “taken captive by the Romans during the Social War.” (See Horace, Wikipedia.)

During the Ottoman wars, Christians were enslaved, but once again enslavement was the result of an armed conflict except that the conflict opposed people of different faiths. These religious conflicts have been numerous, the worst being the Crusades. Mercedarians often rescued captive Christians. 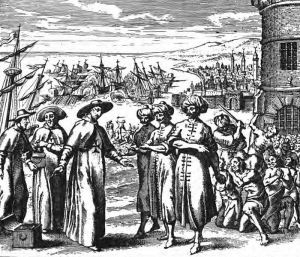 The work of the Mercedarians was in ransoming Christian slaves held in Muslim hands (1637). (Photo credit: Wikipedia)

Serfdom[2] also constituted a form of slavery. In fact, slavery endures: debt bondage, the sex industry, child labour, etc. but many slaves and most serfs were and are of the same ethnicity as their owner, lord or seigneur, which precludes racial discrimination. 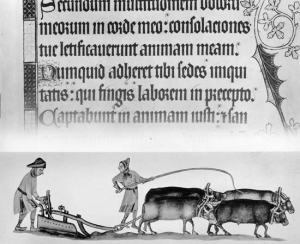 I must skip examples or never publish this post. Moreover, we have reached a topic defined by the United Nations as “racial discrimination.” (See Racism, Wikipedia.)

According to the United Nations‘ Convention on the Elimination of All Forms of Racial Discrimination,

“the term ‘racial discrimination’ [a term adopted in 1966] shall mean any distinction, exclusion, restriction, or preference based on race, colour, descent, or national or ethnic origin that has the purpose or effect of nullifying or impairing the recognition, enjoyment or exercise, on an equal footing, of human rights and fundamental freedoms in the political, economic, social, cultural or any other field of public life.” (See Racism, Wikipedia.)

The above definition of racial discrimination is consistent with Gobineau’s racial theories, in that it combines race and ethnicity. 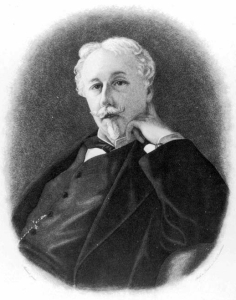 Joseph Arthur, Comte de Gobineau[3] (14 July 1816 – 13 October 1882) is the author of L’Essai sur l’inégalité des races humaines (An Essay on the Inequality of Human Races) (1853 – 1855). According to Gobineau, there was inequality between the races: the white, the black and the yellow, the white race being the superior race. However, although the “white” race was deemed superior to the “black” and “yellow” races, Gobineau looked upon some Caucasians, the white, as inferior to other Caucasians. The term Caucasian is still used, but less frequently, to describe members of the white race. As for the word Aryan, it existed before Gobineau. (See Aryan, Wikipedia)

“He [Gobineau] advanced the theory that the fate of civilizations is determined by racial composition, that white and in particular Aryan societies flourish as long as they remain free of black and yellow strains, and that the more a civilization’s racial character is diluted through miscegenation, the more likely it is to lose its vitality and creativity and sink into corruption and immorality.”[4]

Gobineau’s theories may have influenced Nazi leader Adolf Hitler, but Gobineau was not anti-Semitic and cannot be linked, at least directly, to the slaughter of 6,000,000 Jews by Hitler’s Nazis. Gobineau’s Aryans were “the peoples of European and Western Asian heritage,” including the peoples of the Middle East and India, as in Indo-European languages. (See Caucasian race, Wikipedia.) As for Hitler’s Aryan race, it excluded the Jews.

The “allies” fought Germany not only because Hitler was invading other countries, beginning with the Sudetenland and Poland, but because of Aryanism. In other words, ethnicity played a major role in World War II and, once Hitler seized power, no dissent was tolerated in Germany.

Racism: The Black & the Coloured

In the case of the lucrative Atlantic slave trade, or Translatlantic slave trade, which took place between the 16th and the 19th centuries, racism, as most of us understand it, i.e. Gobineau’s black, white and yellow races, was a major factor. In this instance, slavery  and racism were linked. The slaves were black and the black had been considered a less-than-human race before the Transatlantic slave trade. Ironically, black people often captured black people to sell them to slave traders who would send them to both South and North America. You may remember that Ignatius Sancho’s father committed suicide to avoid being subjected to slavery. (See RELATED ARTICLES.) Black Africans themselves were slave traders and slave owners.

“beyond [known peoples of black West Africa] to the south there is no civilization in the proper sense. There are only humans who are closer to dumb animals than to rational beings. They live in thickets and caves, and eat herbs and unprepared grain. They frequently eat each other. They cannot be considered human beings.” “Therefore, the Negro nations are, as a rule, submissive to slavery, because (Negroes) have little that is (essentially) human and possess attributes that are quite similar to those of dumb animals, as we have stated.” (See Racism, Wikipedia.)

“[D]umb animals!” In the United States, the slaves were also black. Consequently racial discrimination often followed the ignominy of enslavement, especially in the former slave states. But racial discrimination soon extended to people of colour who were neither black nor slaves. They were Amerindians or persons of mixed ancestry (métis). Amerindians were an inferior “race” compared to the white “race,” yet they were not black slaves. They were people of colour.

In a former post, entitled From “Manifest Destiny” to Exceptionalism, I quoted Senator John Caldwell Calhoun (18 March 1782 – 31 Mars 1850) who believed only Caucasians, but which Caucasians, should enter into “our Union:”

“We have never dreamt [sic] of incorporating into our Union any but the Caucasian race—the free white race. To incorporate Mexico, would be the very first instance of the kind, of incorporating an Indian race; for more than half of the Mexicans are Indians, and the other is composed chiefly of mixed tribes. I protest against such a union as that! Ours, sir, is the Government of a white race…. We are anxious to force free government on all; and I see that it has been urged… that it is the mission of this country to spread civil and religious liberty over all the world, and especially over this continent. It is a great mistake.”  (See Manifest Destiny, Wikipedia.)

I suppose it would be difficult to enslave a person one had not first divested of his or her humanity. It remains that being born black is what I have called, in an earlier post but different context, an accident of birth. If one is white and born to an aristocratic family, it is also an accident of birth.

Being rich is also, to a very large extent, an accident of birth. In Russia, serfdom  was not abolished until 1861 and it impoverished landowners. In North-America, the loss of slaves—free labour—led to a civil war and contributed to racism. The abolition of slavery had impoverished the slave-owners. Shouldn’t former slave-owners and their descendants be compensated for the loss of their slaves? Why should they pay taxes and promote a decent minimum wage? Why should the children of their inferiors be given access to higher education?

There are people who do not want to attend university or cannot pass the entrance examination. It is best for some people to enter a community college and learn a trade. My plumber once told that he would rather be a plumber than a university teacher. There are many ways of earning a living and a decent living.

From Slavery to Racism
Impoverishment

As we know, long after the abolition of slavery, racism persists and many citizens feel they should carry a gun to defend themselves. The abolition of slavery did not transform the black into white citizens and it impoverished slave owners and their descendants. Hence the Ku Klux Klan and white supremacists, violence by the police and against the police, and, as far as I can see, disrespect towards the President of the United States, who is a man of colour. 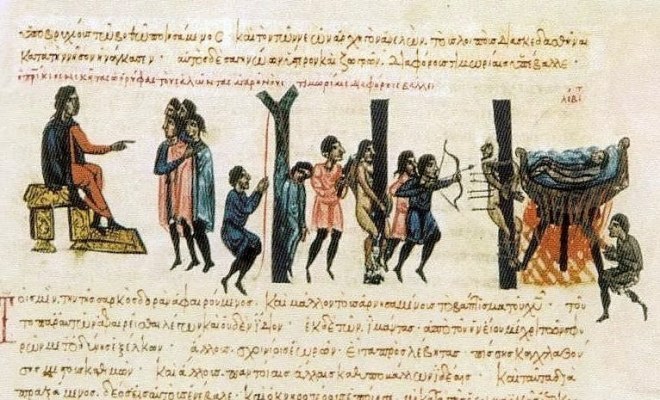 I have often wondered whether or not the mental representation of coloured people, expressed by Senator John C. Calhoun a long time ago, has survived. In other words, I have wondered whether or not what we call racism is a built-in mental content. If it is a built-in mental concept, there’s very little room left for reason to lead to a change. Yet, it’s a mea culpa. We’ve all “sinned.”

Fortunately, we can end racism. President Barack Obama was elected to the presidency of the United States. He did not buy his position. It is clear, therefore, that racism is waning, but racism remains a major issue.

We, humans, must now fight poverty, violence, terrorism. We have to put an end to flogging and beheading.

However, we could first put an end to racism. It can be a society’s decision. There are white supremacists in Canada!

King regards to all of you.

4 thoughts on “Comments on Racism”