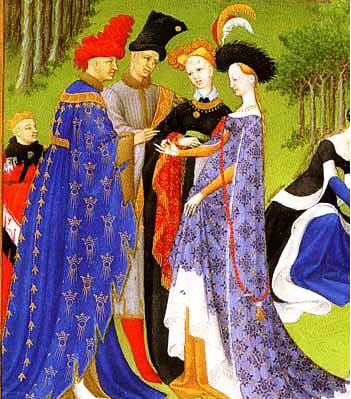 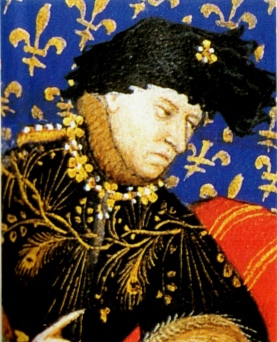 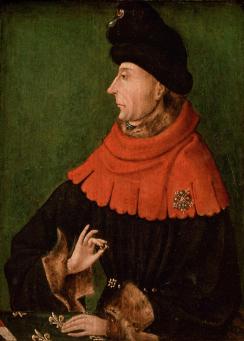 I hope the list above will prove helpful. It resembles a dramatis personae, the names of characters in a play. But battles and treaties have been included.

The Assassination of Louis I, duke of Orleans (1407)

There is history and behind it, behind the official record, stories or rumours. Such is the case with the central event of the Hundred Years’ War: the Treaty of Troyes, signed at Troyes, France, by Charles VI, the “Mad,” in the presence of his wife, Isabeau of Bavaria. 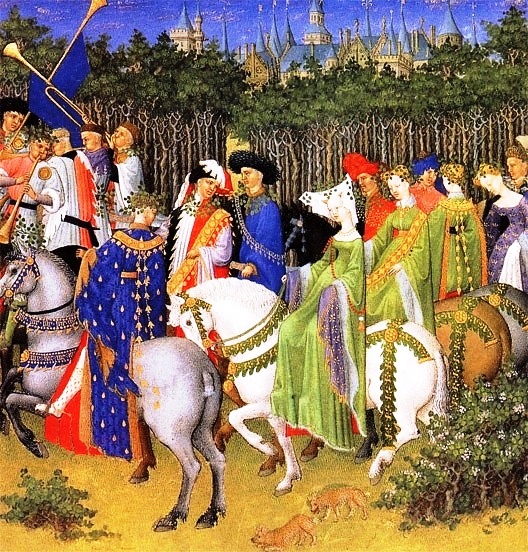 In 1407, during the Hundred Years’ War, Louis I, duc d’Orléans was assassinated by thugs in the service of John the Fearless, duke of Burgundy. A civil war broke out which opposed the Armagnacs (the House of Valois) and the Burgundians, a French royal house. During the minority of Charles VI, Philip the Bold, duke of Burgundy (17 January 1342 – 27 April 1404) had been regent. In other words, there was an interregnum. In 1388, Charles VI dismissed the Burgundians.

A few years later, in 1393, Charles VI lost stature when he became mentally. A mad king is a weak king. During Charles VI’s bouts of madness, Charles VI’s wife, Isabeau of Bavaria, sat on the regency council, but Louis I, duc d’Orléans, Charles VI’s brother, was gaining ascendancy, which undermined the Burgundians’ attempt to rule France.

Rumour has it that Louis I, duc d’Orléans became Isabeau de Bavière’s lover and fathered Charles VII, the heir presumptive to the kingdom of France. It appears Charles VI knew his son was fathered by Louis, duke of Orleans. This would shed light on his signing the Treaty of Troyes (1420), central to the Hundred Years’ War, the broader theatre. Charles VI also knew his son had assassinated John the Fearless and disinherited him. Charles VII was disinherited before the Treaty of Troyes.

There are times when rumours are history, or when stories are history. Our historical fact is that under the terms of the Treaty of Troyes, signed in 1420, French King Charles VI, the “mad” King, disinherited his son, Charles VII, and bequeathed his kingdom, the kingdom of France, to Philip V, King of England. Charles VI also agreed to a marriage between Philip V and his daughter Catherine de Valois. Catherine gave birth to a son on 6 December 1421. 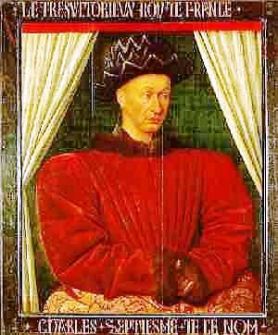 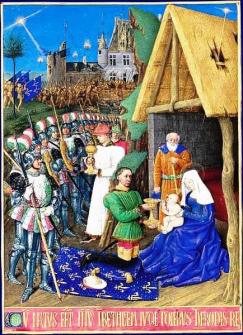 Charles of Orléans as Magi by Jean Fouquet (Google)

Jean de Dunois was loyal to his half-brother, Charles d’Orleans. During Charles of Orleans’ lengthy detention in England, Jean de Dunois looked after his half-brother’s interests in France and, particularly at Orléans. When Joan of Arc entered the war, then at a low point, Jean de Dunois and La Hire were her main generals. Joan of Arc so inspired them that they lifted the Siege of Orleans, allowing her to complete the task assigned to her by the archangel Michael, God’s warrior. She took Charles VII to Reims, where he was crowned King of France on 17 July 1429. On 6 November 1429, Henry VI was crowned King of England at Westminster Abbey and, on 26 December 1429, King of France, at Notre-Dame de Paris.

The French victory at Orleans changed the course of the war and the rightful heir was crowned on July 17 at Reims, the cathedral where French Kings were crowned. The Hundred Years’ War lingered, but Joan had defeated the English, as was requested of her by the archangel Michael. France had a French King, not an English King.

One could say that Joan had undone the Treaty of Troyes, which is true to a very large extent. The French House of Valois ruled France, not the English House of Plantagenet. However, Philip VI could claim the throne of France and, as noted above, Philip VI was crowned King of France on 26 December 1429, at Notre-Dame de Paris. 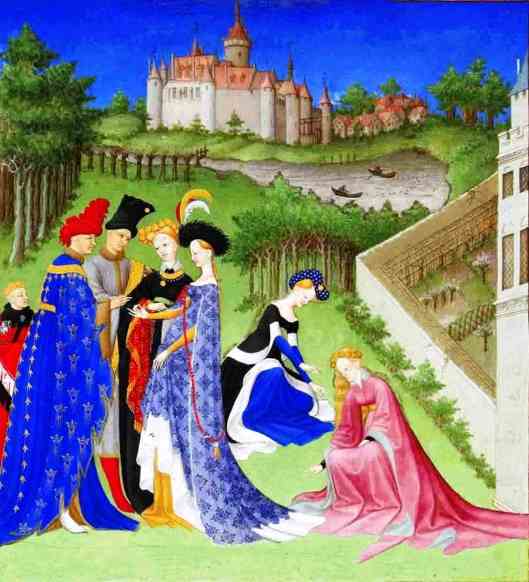 However, there was a war within a war. In 1410, Bernard VII, Count of Armagnac and constable of France married his daughter Bonne d’Armagnac (19 February 1339 – 1430/35) to Charles, duke of Orleans. The wedding of Charles, duke of Orleans and Bonne d’Armagnac, depicted in the Très Riches Heures de Jean de France, duc de Berry, strengthened the crown of France. The Armagnacs were a powerful family. Bonne was 11 years old and her spouse, 16, when the two married. They were very young. The marriage however was first and foremost a contract or alliance. It may never have been consummated as Bonne died childless in 1430 or 1435. Yet, despite his age, Charles was marrying for the second time.

Charles’ first wife, Isabelle de Valois, died in childbirth in 1409. As for Bonne, she would die childless when Charles was in captivity. She was 16 when her husband was captured at the Battle of Agincourt, in 1415. She died in 1430 or 1435, before her husband’s release, which did not occur until 1440. When he returned to France, Charles d’Orléans married 16-year-old Maria of Cleves (19 September 1426 – 23 August 1487) who was 35 years younger than her husband. They had three children, one of whom would be King of France, Louis XII of France.

Charles’ wedding to Bonne d’Armagnac is featured above. It is an illumination in Jean de France’s Très Riches Heures de Jean de France, duc de Berry. Bonne was related to John, Duke of Berry (30 November 1340 – 15 June 1416), a Burgundian who died of the plague.

It has been said that Bonne d’Armagnac’s marriage to Charles d’Orléans triggered the Armagnac-Burgundian Civil War, which lasted until 1435. The wedding did empower the House of Valois. Charles VII was the rightful heir, according to the French. And despite the death of Louis of Orleans, the House of Orleans had a ruler, which benefited Charles VI, King of France. But by the same token, the marriage weakened the Dukes of Burgundy.

During the Armagnac-Burgundian Civil War,

In other words, the Burgundian reaction to the marriage of Charles Orléans led to a harmful alliance between France and England. Moreover, it is rumoured that the Treaty of Troyes was orchestrated by the Burgundians. If it was, they did not realize they would have to fight the English in order to rule France. The Armagnac’s King, Charles VII, ascended the throne of France in 1429, so France had two kings, one of whom the French could not consider their king. The Treaty of Troyes is the great pity that had befallen France. The House of Plantagenet coveted the French throne, but the Burgundians had become English and, in 1415, England had won a major victory at Agincourt and captured Charles, duke of Orleans. France’s decisive victory at the Siege of Orleans angered the Burgundians.

After England’s defeat at the Siege of Orleans, the Burgundians captured Joan of Arc and handed her over to the English. She was burned at the stake on 30 May 1431 and Charles VII did not save her.

Poetically speaking, the rumour according to which Charles VII was Louis of Orleans‘ son is very helpful. The Treaty of Troyes remains senseless, as does a Burgundian alliance with England, but Charles VI’ unprofitable decision is now more understandable. If given a choice, I believe I would combine the story and history, because the story explains history, all the more since a humble girl heard voices and did as an archangel directed her to do. It seems a legend.

Captured in 1415, Charles, duke of Orleans was released in 1440 and, meanwhile, a poet was born who wrote Ballades, Rondeaux and Chansons, often mentioning Valentine’s Day. I have now read all of his poetry. It is listed as medieval and is ‘courtly,’ as in “courtly love.”

Charles d’Orléans often wrote several poems that used the same first line, or a variation of that line. Also, the first half of that line often contradicted the second half. Antithetical lines are a rhetorical device, but most of Charles’ antithetical lines reflect the human condition. The best-known and my favourite is:

« Je meurs de soif auprès de la fontaine. »
(I die of thirst next to a fountain.)

My favourite line reminds me of Charles’ statement to Marie de Clèves, his third wife, who was 35 years younger than her husband. The difference was ‘poetically’ correct:

“ ’cause you for me were born too late.
And I for you was born too soon.”

(I believe my computer is recovering, but it is unstable. It didn’t have cookies. It logs me out when it shouldn’t.)

My kindest regards to everyone. ♥ 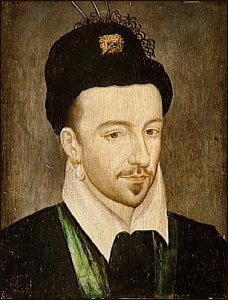