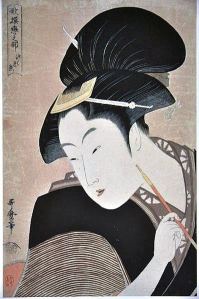 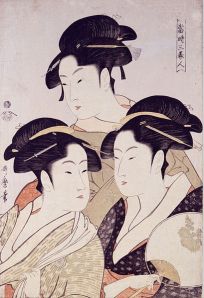 In the middle of the nineteenth century, as of Édouard Manet, Japanese art was very influential in the west, particularly in France. The term Anglo-Japanese style was used beginning in 1851. As for the term Japonisme, it was coined in 1872, almost after the fact. By 1872, Japonisme had already had a significant impact on French art.

Many Japanese artists created prints. However, the better known are

We will discuss Kitagawa Utamaro, who lived during the Edo, or Tokugawa, period (1603 and 1868) in the history of Japan. He arrived in Edo, the current-day Tokyo, with his mother under the name of Toyoaki[iii]. Utamaro was a pupil of Toriyama Sekien at the “aristocratic” Kanō School and may have been his son. He lived in Sekien’s house while he was growing up. (See Utamaro, Wikipedia.)

ukiyo-e: a genre of woodblock printing

Utamaro created several series of woodblock prints. Woodblock printing is the traditional form of Japanese printing and it has genres. Utamaro preferred using the popular ukiyo-e printing. It allowed mass-production of prints. According to the Encyclopædia Britannica, Utamaro is the greatest artists of the ukiyo-e (“pictures of the floating world”) movement.[iv]

Beginning in 1782, in the earlier part of his life, Utamaro lived with Tsutaya Jūzaburō, a publisher who always remained a friend. During the years he spent with Jūzaburō, it is believed Utamaro worked as an illustrator of Kyōka Suigetsu (Mirror Flower, Water, Moon), sometimes called crazy poetry. At that point in his career, he also painted dancers and actors, kabuki. Examples are available at Google Images.

(Please click on the image to enlarge it.)
(Photo credit: Google Images)

However, as of 1791, Utamaro focussed on creating several series of studies portraying women, usually wearing a kimono. Such artwork, to which Utamaro owes the celebrity he enjoyed during his lifetime, is called bijinga (bijin-ga [FR]). Utamaro’s studies of women are considered among the finest bijinga ukiyo-e prints. Some of his bijinga prints depict a woman and a child at various stages of childhood. It has therefore been suggested that Utamaro married and had a child, which is mostly speculative but poetical.

Utamaro enjoyed erotica. He painted the courtesans, or prostitutes, of Edo’s  Yoshiwara‘s “pleasure” district. It is rumoured that he lived near the Yoshiwara district and that he may have been born in that district. Utamaro published thirty shunga  (erotica) books, many of which are listed in Wikipedia. For examples of bijinga and shunga, click on Utamaro.

Wikipedia (see Utamaro) provides a list of Utamaro’s collections of bijinga (bijin-ga [FR]) and shunga estampes (prints). Moreover, according to Wikipedia, Utamaro is best known for his:

In 1804, he was sentenced to be handcuffed for fifty days for publishing prints depicting the concubines of military ruler Toyotomi Hideyoshi (2 February 1536 or 26 March 1537 – 18 September 1598). This sentence, horrible torture,[iii] crushed a proud Utamaro emotionally and ended his career. He died two years later, in 1806, at the age of 53.

Utamaro had produced some 2,000 prints and a number of paintings called surinomo, also prints, but produced in smaller quantities and for a more refined audience. 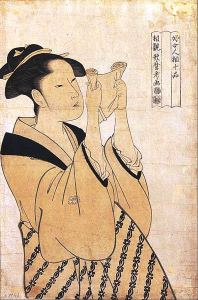 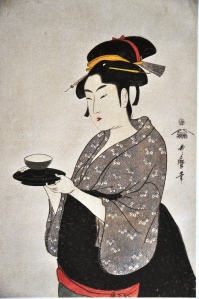 (Please click on the images to enlarge them.)
(Photo credit: Wikipaintings.org)
Portrait of Oiran Hanaogi, 1794
Portrait of Naniwaya Okita, 1793

Utamaro, an immensely gifted artist, was discovered in Europe in the second half of the nineteenth century.  As mentioned at the beginning of this post, prints made by Utamaro, Katsushika Hokusai and Utagawa Hiroshige brought to the West the Anglo-Japanese style and Japonisme, or Japanism.

According to Wikipedia, “artists were especially affected by the lack of perspective and shadow, the compositional freedom gained by placing the subject off-centre mostly with a low diagonal axis to the background.” (See Japonism, Wikipedia.)

Orientalism had precedents in Europe. Byzantine art and, especially, the art of the Ottoman Empire left an imprint. Among other historical circumstances, the Crusades and the travels of Marco Polo[vi] (c.1254 – 8–9 January 1324) contributed to a knowledge of the Orient in Europe. Trade routes were established.

However, when works were brought from Japan to Europe in the middle of the nineteenth century, after a period of seclusion, named sakoku, Japonisme became a pervasive influence. It started to permeate European art, overriding movements and extending into the decorative arts and design. It may have dealt a blow to academic art, sometimes called “art pompier [pompous].”

[i] Hokusai’s The Great Wave off Kanagawa and the remainder of his Thirty-six Views of Mount Fuji are classics.
[ii] Among other series, Utagawa Hiroshige produced The Fifty-three Stations of the Tōkaidō. “Between 1998 and 2000 British artist Nigel Caple made drawings of the 55 stations along the Tōkaidō. His inspiration was the Hoeido Edition of woodblock prints entitled The Fifty-three Stations of the Tōkaidō by Utagawa Hiroshige.” (See Tōkaidō, Wikipedia.)
[iii] This is the name he is given in the French entry on Utamaro.  He published his first print, a book cover, under a pseudonym, gō, and later adopted the name Ichitarō Yusuke.
[iv] The samurai code of honour included seppuku, suicide as death with honour.
[v] “Utamaro”. Encyclopædia Britannica. Encyclopædia Britannica Online.
Encyclopædia Britannica Inc., 2013. Web. 27 Jun. 2013
<http://www.britannica.com/EBchecked/topic/620551/Utamaro>.
[vi] Marco Polo’s Book of the Marvels of the World or The Travels of Marco Polo, 2 volumes, are Gutenberg EBooks #10636 and #12410.
A Courtesan
(Photo credit: Google Images)
(Please click on the image to enlarge it.)