“A fox [above] pretends to be dead to deceive two birds into coming close enough to catch.” (fol. 53r) (Photo credit: The Medieval Bestiary) (Aarne-Thompson Classification Index, 56A)[1]

“The lion’s cubs [below] are born dead; after three days the father comes and roars over them, and brings them to life.” (fol. 96v) (Photo credit: The Medieval Bestiary)

In his Preface to Æsop’s Fables, its translator, George Fyler Townsend,[2] states that “[t]he introduction [in fables] of the animals or fictitious characters should be marked with an unexceptionable care and attention to their natural attributes, and to the qualities attributed to them by universal popular consent. The Fox should be always cunning, the Hare timid, the Lion bold, the Wolf cruel, the Bull strong, the Horse proud, and the Ass patient.” (Bold characters are mine.)

“A fox [above] runs off with a cock, while a woman carrying a distaff gestures angrily.” (fol. 71v) (Photo credit: The Medieval Bestiary)

The Fox as the Devil, etc.

Townsend’s statement reflects an anthropomorphic vision of animals (humans in disguise), as in George Orwell‘s 1945 Animal Farm). In fables and in beast epics, such as Le Roman de Renart, animals are anthropomorphic. But Townsend’s comment also reflects a will to stereotype animals and transform them into allegorical creatures. In Medieval Bestiaries, they are symbols.

Medieval writers were fond of allegories, hence the questionable, but poetical, qualities bestowed on medieval beasts. The Lion is God and the Lamb, Jesus Christ. Only a virgin can catch the legendary or mythical Unicorn. (See Unicorn, Wikipedia – the free encyclopedia). The Beaver[3] eats its own testicles to avoid being caught by hunters. The fox is not only devious, but the devil himself:

“The fox represents the devil, who pretends to be dead to those who retain their worldly ways, and only reveals himself when he has them in his jaws. To those with perfect faith, the devil is truly dead.” (See David Badke or The Medieval Bestiary [bestiary.ca].) 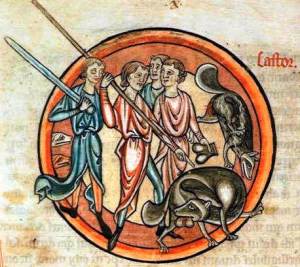 “Hunted [above] for its testicles, it castrates itself to escape from the hunter.” (fol. 9r) (Photo credit: The Medieval Bestiary)

Exceptions to the lore, but…

There are exceptions to the lore. The real Dog is a very loyal animal. It can sniff out nearly anything or anyone. However, a real Dog does not let go of the prey it holds for the prey it might catch. In other words, the fanciful and the fantastic suffuse Medieval Bestiaries, such as the Aberdeen Bestiary or the Ashmole Bestiary (or Bestiaries). The same is true of several extraordinary medieval beasts, not to mention qualities attributed to birds, stones, and other aspects of nature. The merveilleux FR characterizes more than a thousand years of Natural Histories. It is often called le merveilleux chrétien, a Christian magical realism (the fantastic).

Writers of Medieval Bestiaries used Natural Histories such as Claudius Alienus‘ (170 CE – 235 CE) On the Nature of Animals (17 books) as their reference. Yet, these works were rooted in earlier texts, such as Herodotus‘ Histories and Pliny the Elder‘s (c. 23 CE –  24 or 25 August 79 CE) Historia Naturalis.[4] However, as we have seen, the preferred source of writers of Medieval Bestiaries was the anonymous Physiologus, which cannot be considered “scientific.” (See Manuscript shelf.)

This depiction of animals seems all the more anthropomorphic when the animal is given a name. In the Ysengrimus, the Fox is called Reinardus, a Latin form of Renart, the Fox’s name in the Roman de Renart, and La Fontaine’s Renard, the current spelling. The Fox is all too human. Professor Jan M. Ziolkowski[5] writes that animals featured in the Roman de Renart are

so highly individualized that they have names, like human beings.

This comment reminds me of T. S. Eliot‘s “The Naming of Cats,” Old Possum’s Book of Practical Cats (1939). “The Naming of Cats” was a source for Andrew Lloyd Webber‘s   immensely successful musical entitled Cats (1981). (See Cats, Wikipedia – the free encyclopedia.)

The naming of the Roman de Renart‘s animal cast begins with the Ysengrimus (1148-1149), the birthplace of Reinardus (Latin) who becomes Renart beginning in 1274-1275, when the first “branches” of the Roman de Renart, written in “Roman,” the vernacular, were published. Animals in the Medieval Bestiary are seldom presented with animal attributes, with the probable exception of illuminations (enluminures FR).

In other words, beasts inhabiting the Medieval Bestiary are stereotypes, or archetypes. Deviousness is the Fox’s main attribute, but it is a literary attribute, by “universal popular consent.” In fact, Medieval Beast literature is an example of intertextuality EN, a term coined by Julia Kristeva in 1966. Intertextuality is a theory according to which texts are rooted in an earlier text or earlier texts. One could also use the word palimpsest.

“Bear cubs are born as shapeless lumps of flesh, so their mother has to lick them into their proper shape.” (fol. 21r) (Photo credit: The Medieval Bestiary)

“The lion is the king of beasts.” (fol. 6r) (Photo credit: The Medieval Bestiary)

“Bear cubs are born as formless lumps of flesh; here [above] the mother is licking the cub into shape.” (fol. 22v) (Photo credit: The Medieval Bestiary) 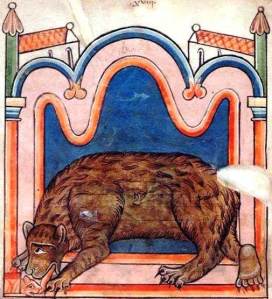 “A mother bear [above] licks her cub into shape.” (Photo credit: The Medieval Bestiary) 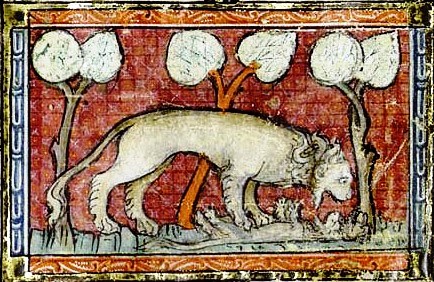 “‘le lyon [above] qui fait revivre ses lyonciaus’ – The lion revives its dead cubs. In the Bestiaire d’amour the man says that in the same way the woman can revive him from his love-death.” (fol. 18r) (Photo credit: BnF)

The Fox: “Licking into Shape”

In fables and the Reynard the Fox cycle, Renart’s main fictitious characteristic is his devious nature, an attribute bestowed upon him by humans and which he possesses in fables, beast epics, medieval bestiaries, and in Natural Histories, by “universal popular consent.”

Pliny the Elder, however, does not mention deviousness with respect to the fox. What Pliny reveals is the birth of incomplete offspring that have to be licked into shape. I have yet to find an image of the Fox licking its offspring into shape, but Bears and Lions also lick their incomplete progeny into shape. (See Fox, in The Medieval Bestiary.) Although this characteristic, i.e. licking into shape, was noted in Pliny the Elder’s Naturalis Historia, or Natural History (published c. 77– 79 CE), it may have entered animal lore long before Pliny was born.

As noted above, I have not found an image of the Fox licking unfinished foxes into shape, but I have found images of Bears licking their cubs into shape and Lions breathing life into lions born dead.

Renart et les anguilles (br. III) (Reynard and the eels)
Æsop’s “The Dog and the Fox Who Played Dead” (ATU 56A)
Laurentius Abstemius 146

Animal “lore” also presents a second image of the Fox. We have seen that in “The Crow and Fox” (« Le Renard et le Corbeau, » (La Fontaine I.3) the fox flatters the crow into singing and dropping its dinner. But the literary fox also plays dead to catch food, which is yet another manifestation of the fox’s deceptive literary “nature.” The theft of fish is motif number 1 in the Aarne-Thompson-Üther classification system.

Previously, Isidore of Seville (7th century CE) had written about foxes that they were “deceptive animals.” As for Bartholomeus Anglicus (13th century), he had described the fox as “a false beast and deceiving” that “makes believe it is dead in order to catch food.” (ATU 105)

However, animals dwelling in

They possess qualities attributed to them “by universal popular consent,” which, in the Middle Ages, may have been the consent of Christian “naturalists,” some of whom were monks and scribes.

The fox, a beloved rascal, was the devil himself. Besides, we owe fox “lore” at least two English expressions: to “lick into shape” and “sour grapes.”

I apologize for my tardiness and send all of you my kindest regards. ♥

[4]  Pliny the Elder died in the eruption of Vesuvius.