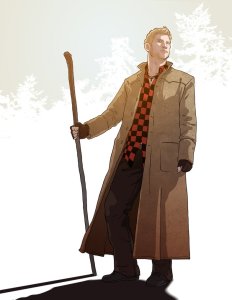 Given the more intimiste and poetical quality of her novels, Germaine Guèvremont’s (born Grignon) Le Survenant, published in 1945 and its sequel, Marie-Didace (1947), Germaine’s  television series could not be as popular as Un Homme et son péché, Les  Belles Histoires des pays d’en haut, or Séraphin: Heart of Stone, the title of the 2002 movie’s based on Un Homme et son péché. Le Survenant was nevertheless an extremely successful television series.

It is possible to see glimpses of Le Survenant as a television serial on a Cinéma québécois site, but the character’s accent makes it difficult to understand the words and the television clips are very old. A little updating would benefit the site, but I would nevertheless recommend it as well as a Télé-Tag and the IMBd site. In 2005, the novel was made into a movie, not a great movie, no more than Séraphin: Heart of Stone, but a respectable movie.

On a fall day, a man knocks on Didace Beauchemin’s door. No one knows anything about him and he does not seem to remember his own past. We suspect, however, that he was brought up in an anglophone or bilingual milieu. He often says “Nevermind” (spelled differently) and he is obviously a well-educated “god-of-the-roads” (grand-dieu-des-routes).

When he arrives, unexpectedly, at Didace’s house, le survenant is hungry and asks to join the family at the dinner-table. Later, he explains that he will earn his keep by working for Didace who is a well-to-do, solid, and very likable  “cultivateur” (the renamed habitant).  Didace has a son, the rather limp Amable, and a daughter-in-law, Alphonsine, both of whom live upstairs in Didace’s large house. They live upstairs. They have no children. So Didace is disappointed. How will there be continuité, a concern for French Canadians. He would therefore like le survenant to be his son. 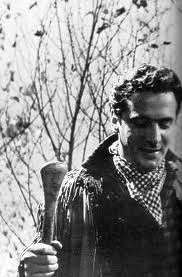 Angélina Desmarais, who limps a little and keeps turning down potential husbands, falls in love with le survenant. The feeling is mutual, but Angélina knows that he will leave. She has no illusion. However, le survenant is rejected by many of the inhabitants of le Chenal-du-Moine. He is not one of theirs.

A year after his arrival, le survenant leaves, without saying good-bye, not even to Angélina.

However, going through old issues of Le Soleil, Quebec City’s main newspaper, le curé, the parish priest, finds a note.  The Espéry de Lignères family members are looking for a relative: Malcolm Petit de Lignères or Marc Delignières, as he had transformed his name.  Malcolm or Marc was brought up by a great-grandfather, Malcolm McDowey and disappeared when studying Law at McGill University. He is heir to a fortune.

Guèvremont does not take us further. At any rate, Didace wants to speak to the curé about his plans to marry an Acadian woman who will bear him a fine daughter: Marie-Didace.

Le Survenant is a Proustian novel, a remembrance of things past. We are in a small village, le Chenal du Moine, near Sorel, now Sorel-Tracy and Guèvremont makes us hear the birds and she takes us down the river in a row-boat: no motor! Her characters speak the French they brought to New France, they gather in huge kitchens, close to their cast iron stove. You should have seen my grandmother’s, not to mention her house.

Le Survenant is considered a roman de la terre, but it is not Claude-Henri Grignon‘s Un Homme et son péché, featuring real-life characters advocating colonisation. Moreover if the Beauchemin family members are “crushed, never to rise again” Britannica, quoted below), it is not so much that they are running out of land. It is, quite simply that they are entering a new world, but Guèvremont remembers.

Allow me to quote The Encyclopædia Britannica’s entry on Germaine Guèvremont.

Grignon, educated in Quebec and at Loretto Abbey, Toronto, married Hyacinthe Guèvremont, a Sorel, Que., druggist; they had a son and three daughters. She worked on Le Courrier de Sorel and as correspondent for the Montreal Gazette before moving to Montreal in 1935. In Montreal, Guèvremont contributed sketches of rural life to the monthly magazine Paysana. En Pleine Terre (1942), a collection of her realistic stories of rural French Canada, was followed by the related novels Le Survenant (1945), which inspired a French-Canadian television series, and its sequel, Marie-Didace (1947). The two novels show a family crushed, never to rise again, after a season of hope. The two novels were translated and combined as The Outlander (1950) in the United States and Canada and as Monk’s Reach (1950) in the United Kingdom.”[ii]

Alexander Glazunov‘s Petit Adagio was the musical theme of the television series based on Le Survenant. (The Seasons, Autumn Op. 67)