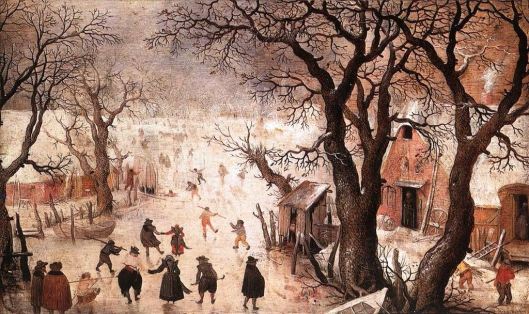 Looking at the Past Week

It was not an easy week for this author. If there is any way to avoid bunions, use it. The only possible cause I can think of, in my case, is being made to look feminine by wearing shoes that had high heels and a pointed front. However, the cause could be genetic. At any rate, try to avoid the surgery. Your doctor will supply you with morphine and codeine, but if you kill the pain entirely, you may not notice that there is infection.

The week was otherwise rather pleasant and informative.  We saw that:

And now that winter is here, we are being introduced to Hendrick Avercamp, a seventeenth-century Dutch artist who painted many lovely winter scenes. Thanks to the internet, we can see that in the Netherlands of the seventeenth century, people played golf on ice wearing skates and looked very much as though they were playing hockey. Moreover, in the Netherlands one could commute quickly by skating down frozen waterways. As well, notice the shape of the roofs.