Père Marquette and the Indians [at the Mississippi River], oil painting (1869) by Wilhelm Lamprecht (1838–1906), at Marquette University[I]

Several visitors to North America have left precious accounts of their trips as well as fine analysis of the people whose lands they visited.  For instance, in recent years, Alexis de Tocqueville‘s (29 July 1805, Paris – 16 April 1859, Cannes) two-volume Democracy in America (De la démocratie en Amérique), published in 1840 and 1845, has received a great deal of attention.

Reuben Gold Thwaites: the Editor (portrayed to the right, below) 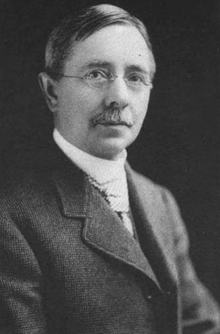 However, one could and perhaps should include The Jesuit Relations (73 volumes, 1896-1901), among works in which Europeans have described North America. The Jesuit Relations have been edited by Reuben Gold Thwaites, as The Jesuit Relations and Allied Documents, Travels and Explorations of the Jesuit Missionaries in New France 1610-1791.  Having had the privilege of reading some volumes of the Relations attentively and browsing through every volume, it is possible for me to say that Mr Thwaites’ edition is not only extremely interesting, but also quite easy to read.  It has been translated into English (a parallel translation) from the French, Italian and Latin.[ii]

Every year the Jesuits working in Canada sent a report (une relation) to their superiors in France. According to The Canadian Encyclopedia,

“[a]s a result of Cardinal Richelieu‘s decision to enlist the Jesuits in colonizing French North America, the early history of settlement was systematically and colourfully documented by priests attempting to convert the Indians and also to attract support at home for their project.”[iii]

The Jesuit Relations were compiled by missionaries “in the field,” (The Canadian Encyclopedia), edited by their Quebec superior and sent to the Paris office of the Society of Jesus. They were printed in France by Sébastien Cramoisy. These texts constitute the finest and most complete account of life in Nouvelle-France (New France) beginning in 1632, under Richelieu and Louis XIII, and ending in 1672, twelve years after Louis XIV ascended to the throne (1660).

Documents were sent after 1672, but not systematically.

Contents of the Jesuit Relations: a mixture

The Jesuits told everything. Wikipedia lists: “Marriages and Marriage Customs, Courtship, Divorce, Social Status of Women, Songs and Singing, Dances, and Games and Recreation.” The Relations are a mélange (mixture) blending the activities of Amerindians, the progress of missionaries and the daily life of settlers. Moreover, they include accounts of explorers. 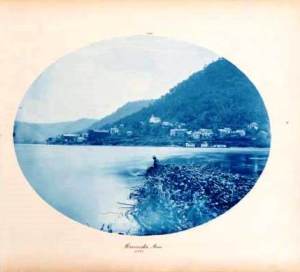 Among accounts of explorers, the Jesuit Relations include a relation by Jesuit Father Jacques Marquette (1 June 1637 – 18 May 1675), who was allowed to accompany French-Canadian explorer Louis Jolliet (21 September 1645 – last seen May 1700). They founded Sault Ste. Marie (now in Ontario, Canada) and later founded St. Ignace, Michigan, in the current United States. They reported the first accurate data on the course of the Mississippi. Two years later, Père Marquette and other missionaries were the first Europeans to spend a winter near Chicago.[iv]

They left from St. Ignace on 18 May 1673 with two canoes and five voyageurs of French-Amerindian ancestry (Métis) and entered the Mississippi on 19 June 1673.  They travelled down the Mississippi, nearly reaching the Gulf of Mexico. Two years later, Père Marquette was exposed to dysentery and died prematurely. As for Jolliet, he was not heard of after May 1700.

The Jesuit Relations are, therefore, eclectic, and they were widely read in the 18th century as “exciting travel literature.” They are the birthplace of the “Bon Sauvage,” who will be used later to provide a silent, yet eloquent, indictment of French society. They constitute invaluable “ethnographic and documentary sources.”[v] 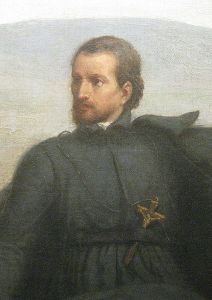 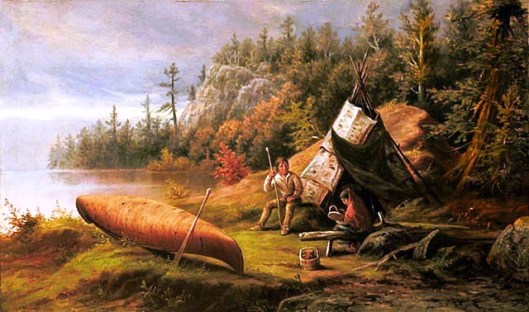 Missionaries to New France had to adapt Christianity so their converts could understand it.  Amerindian languages were simple languages that did not provide “black robes” with ways of expressing abstract notions.  To befriend Amerindians they therefore chose to sing with their congregation.

The best-known piece composed for Amerindians is the Huron carol entitled: “Jesous Ahatonhia.”  It was composed in 1643 for the Hurons at Ste Marie, in all likelihood, by Jean de Brébeuf, a Jesuit missionary, who was tortured to death by Iroquois Amerindians and has become a mythic figure.  The Huron Noël belongs to Canada‘s répertoire of Christmas carols.  The melody was borrowed from a French song entitled: Une jeune pucelle (A Young Maid).

Jesous was translated into French by Paul Picard, an Amerindian notary at Quebec City and, into English, by Jesse Edgar Middleton.  It was then adapted for voice and piano by Healey Willan (ca 1927), an Anglo-Canadian organist and composer (12 October 1880 in Balham, London – 16 February 1968 in Toronto, Ontario).

A Jesuit preaching to the Indians by Charles William Jefferys, 1745 (learnimage.ca)

It would be my opinion the Jesuit Relations do not belong to a discourse or speech that I would call indirect or an “indirection.”  What is said by an animal (fables, beast epics, Orwell’s Animal Farm, etc.), a “bon sauvage,” a Turk, a Persian (Montesquieu‘s Lettres persanes),  Pascal in his Provinciales or Voltaire in Candide is said and not said, or a dire-sans-dire.  However, the Jesuit Relations are not the discours oblique that eighteenth-century Encyclopédistes cultivated to avoid being thrown into the Bastille, jail.

However, the Relations occasionally depict the Amerindians in a manner that makes Amerindians seem morally superior to Europeans. So, as I suggested in my last post, the concept of the “bon sauvage” or “noble sauvage” may well find its birthplace in the Relations. Pierre Biard (1567-1622), who worked in Acadie, the eastern province of Nouvelle-France, has nothing but praise for Amerindians, except that they are “pagans,” a matter he and other missionaries are in Nouvelle-France to correct.

The “Bon Sauvage” becomes a barbarian

However, when François Le Mercier (1604-1690) describes the torture and very slow death of an Iroquois captured by Hurons, he cannot understand that torture could be so slow and so cruel. The missionaries are so horrified than a superior among them speaks to one of the Amerindians. He wants to know why they are killing their captive so painfully and so slowly. The missionary says to the Amerindian that they may indeed kill an enemy, but need they do so in such an atrocious manner. The Amerindian he is addressing is prompt to answer that the French do the same to their own people.

I must say that this particularly relation, included in the Anthology we used, was difficult to present to students.  These missionaries were speaking as Jesus of Nazareth would have spoken. But there was truth to what the Amerindian was saying, if indeed the Amerindian said what he was reported to have said. This, we will never know, but what we know for certain is that the Jesuit who wrote that relation, François Le Mercier, was a compassionate man. As for his superior, he was very brave. He himself could have been subjected to the same death. Several missionaries were indeed tortured and killed, not to mention settlers. They constitute our martyrs and saints.

So, as depicted in the Jesuit Relations, the Amerindians were not always “bon sauvages” or “nobles sauvages,” but the Amerindian who pointed out to an appalled missionary that the French were no better than the Amerindians was making a valid point.  What could the Jesuit answer?  Suddenly, he could only speak for himself and express a point of view that would have been Christ’s point of view.  He could not speak for the French.  Marguerite de Valois, Dumas’s Queen Margot, could not prevent her mother, Catherine de’ Medici, from having La Môle, who was probably innocent, tortured and beheaded.

These missionaries were not our casuists taking sinfulness out of sin. The casuistes were in Europe sleeping in comfortable beds. They were not missionaries fighting their way through black flies to go and convert Amerindians that fur traders turned into alcoholics. Paul Le Jeune (1591-1664) so reprimanded fur traders who were ruining the lives of Amerindians. As for Monseigneur Laval, François de Laval (1623-1708), Nouvelle-France’s famous bishop, he threatened with excommunication fur traders who stooped to exchanging pelts for alcohol. As well, the Jesuits considered Huguenots as greater ‘pagans’ than Amerindians.

When the Amerindian told the Jesuit that the French also burned people, he did pull the rug from under the missionary’s feet, but that relation was not meant to be a criticism of France.  They were not speaking obliquely.  In other words, the Jesuits who compiled the Relations were not in America to find ways of indicting France.  It may have happened occasionally, but I believe it would have been inadvertent and unintentional criticism.

N. B.  By the way, in yesterday’s post, I forgot to mention that St. Francis Xavier University, not a Jesuit university, has the complete Relations, edited by Reuben Gold Thwaites. They can also be read online at Jesuit Relations or Les Relations des Jésuites.