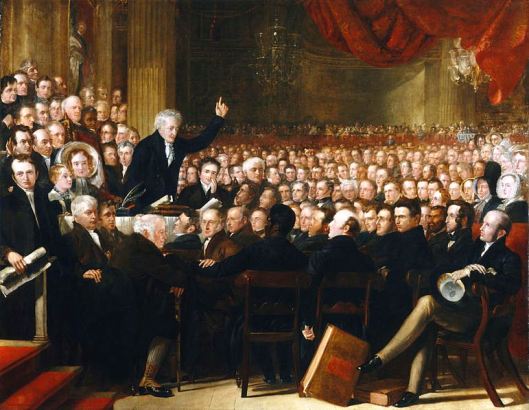 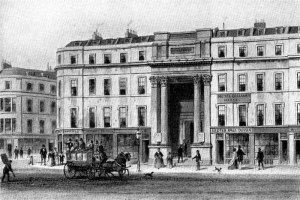 “Thomas Clarkson[i] (28 March 1760 – 26 September 1846), was an English abolitionist. He helped found the Society for Effecting the Abolition of the Slave Trade, formed on 22 May 1787, and helped achieve passage of the Slave Trade Act of 1807, which ended British trade in slaves. In 1840, he was the key speaker at the Anti-Slavery Society (today known as Anti-Slavery International) conference in London, which campaigned to end slavery in other countries.”

The Abolition of Slave Trade (Britain 1807)

The Slave Trade Act of 1807 did not abolish slavery, but it paved the way for the emancipation of slaves in the British Empire, the Empire on which the sun never se[t]. It helped foster awareness of the ignominy of owning another human being, which was soon recognized. Previously, slavery had seemed a “right” and, in the case of the Americas, several members of Africa’s Black population participated in the very lucrative slave trade. (See Slavery and Atlantic Slave Trade, Wikipedia.)

The Abolition of Slave Trade of (America 1807)

Society for the Relief of Free Negroes Unlawfully Held in Bondage
Act Prohibiting Importation of Slaves of 1807 (2nd March), (America)

Among American abolitionists was French-born American educator Anthony Benezet, or Antoine Bénézet (31 January 1713 – 3 May 1784). Bénézet’s Calvinist Protestant[ii] family had been persecuted as a result of the Revocation of the Edict of Nantes.

However, when he moved to America and settled in Philadelphia, Benezet joined the Religious Society of Friends.[iii] In other words, he became a Quaker. Benezet is the founder the first anti-slavery society of the world’s history, the Society for the Relief of Free Negroes Unlawfully Held in Bondage and his legacy. Seventeen of the 24 members of the Society were Quakers. Slave trade was abolished in America shortly thereafter, on March 2, 1807. (See the Act Prohibiting the Importation of Slaves of 1807.)

The Abolition of Slavery

The culmination of the work of British abolitionists, Thomas Clarkson, a Quaker, and others, eventually led to the Slavery Abolition Act of 1833, in Britain. Certain areas of the British Empire did not free their slaves in 1833, but the motivation to free slaves, a motivation rooted in the Age of Enlightenment, the 18th century, was growing into a moral imperative.

The French Revolution did away with slavery, but it resurfaced and was not eradicated in France until 1848.

The American Civil War and the Abolition of Slavery

However, in America, slavery was not abolished until 1865, under the terms of the Thirteenth Amendment to the US constitution, effective beginning on 18 December 1865. In 1863, when seven states seceded and four more would later join these Slave States. In 1861, they constituted the self-proclaimed Confederacy. Secession from the Union was illegal.

The Civil War began in 1861 when the Confederate States attacked Fort Sumter (12-14 April 1861). It was a Confederate victory. Consequently, four more states joined the Confederacy, now comprising a total of 11 Slave States.

On 1st January 1863, President Abraham Lincoln (12 February 1809 – 15 April 1865; by gun) issued an Emancipation Proclamation, freeing all slaves in the 11 Slave States. It was an Executive Order, a direct order from the President of the United States.

To a large extent, those who opposed the abolition of slavery stood to lose free labor and, in many cases, faced poverty and destitution. It could well be that in the United States opposition to taxation is rooted in a form “exceptionalism” or, perhaps, in a form of reversed entitlement. Many extremist Republicans live in former Slave States and many are as wealthy as their ancestors were in the days of slavery. However, given the loss of nearly free labor, they perhaps wonder why they should pay taxes, thereby contributing to the implementation of social programs that protect everyone, but which they, personally, do not need. They are rich and they can therefore look after themselves. In fact, it is possible for such individuals to view taxes as a form of enslavement.

However, it is also entirely possible for people who benefit from social programs to feel they are entitled to the services provided by the government. That is the prevailing definition of entitlement. They may therefore oppose cuts. In fact, the Quebec students who opposed a slight raise in tuition fee ended up asking the Quebec government to provide them with a free education. In their opinion, they were entitled to a free education. Therefore, when their tuition fees were raised by a very small amount, many felt they had been betrayed by the system.

_________________________
[i] Clarkson’s An Essay on the Slavery and Commerce of the Human Species, Particularly the African, Translated from a Latin Dissertation which was honoured with the First Prize in the University of Cambridge, in the year 1785, with Additions, is a Gutenberg Project [EBook #10611]
[ii] French Calvinist Protestants were called Huguenots.
[iii] Many abolitionists were Quakers.
Lincoln: Film Trailer