My kindest regards to all of you. 💕

Rouget de Lisle singing “La Marseillaise” for the first time, at the Town hall in Strasbourg or at Dietrich’s home. (Photo credit: Wikipedia)

I would like to commemorate a event, the birth of La Marseillaise.[i] La Marseillaise, adopted by the Convention on 14 July 1795, is the current national anthem of France, but it was composed in 1792, in Strasbourg, by Rouget de Lisle (10 May 1760, Lons-le-Saunier – 26 June 1836, Choisy-le-Roi). There would be modifications to the Marseillaise, but it outlived the French Revolution and had an interesting career.

Ironically, Rouget de Lisle was a Royalist who was jailed in 1793 and not released until the Thermidorian Reaction, i.e. when Maximilien de Robespierre and Louis-Antoine de Saint-Just were guillotined, on 28 July 1794. Rouget was not guillotined, due, perhaps, to his composition: La Marseillaise. 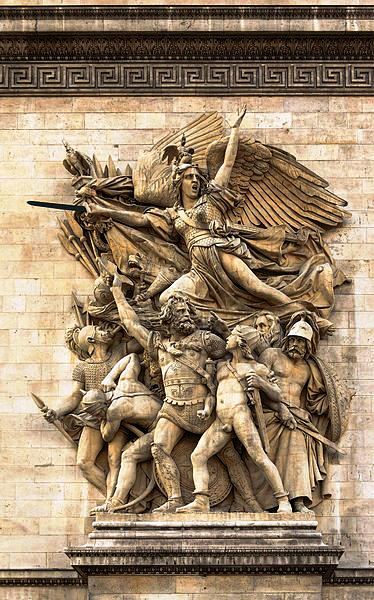 From Strasbourg to Marseilles

Barbaroux and the Provençal volunteers

The naming of La Marseillaise had little to do with geographical location. Provençal volunteers, under the command of Charles-Jean-Marie Barbaroux, had adopted the Marseillaise as their chant de guerre, their war song. Armies have always marched to of the sound music. Barbaroux (6 March 1767 – 25 June 1794), a Freemason and a victim of the guillotine, went to Paris and dissemination of La Marseillaise, by that title, began. Given that the above-mentioned dinner, when Dietrich asked Rouget de Lisle to write an army song for the Army of the Rhine, took place in Strasbourg, at the mayor’s house, the house of Philippe-Frédéric de Dietrich, but the song had acquired a life of its own.

In 1879, La Marseillaise became the official anthem of France (Third Republic) and an official version was composed in 1887. Former French President Valérie Giscard d’Estaing (b. 2 February 1926; in office from 1974 to 1981) criticized it and asked that the rhythm of the national anthem be slower (see L’Élisée, France and L’Express).

Hector Berlioz, however, composed an orchestrated version of the Marseillaise that gave it dignity. In fact, there were many delightful arrangements, transcriptions and quotations of La Marseillaise, despite its rather gruesome lyrics.

Rouget de Lisle is remembered for his Marseillaise. However, what is particularly interesting is the career of that one piece of music. Wikipedia’s entry La Marseillaise has a long list of arrangements, transcriptions and quotations of Rouget’s composition.

Among arrangements of La Marseillaise, Hector Berlioz‘s 1830 arrangement for soprano, chorus and orchestra is very dramatic and has a Russian flavour. I wish I had found a better recording—better sound—than the one inserted below.

Berlioz’s Marseillaise was ‘quoted’ by Daniel Barenboim in the version of the Marseillaise inserted in my last post, 2 February 2014. We also have a piano transcriptions by Liszt and other pieces.

La Marseillaise has in fact been quoted frequently. Tchaikovsky‘s use of the Marseillaise in his 1912 Ouverture is masterful. I have included a movement of Tchaikovsky’s at the bottom of this post.

La Marseillaise has inspired millions. But would that the French Revolution had ended with the Tennis Court Oath, a meeting of representatives of the Third Estate that took place in a jeu de paume, an indoor tennis court. It didn’t. From the moment it began, the Revolution could not be contained.  It had gathered the momentum that led to the “Terror.”

So we had best close with the Marseillaise.