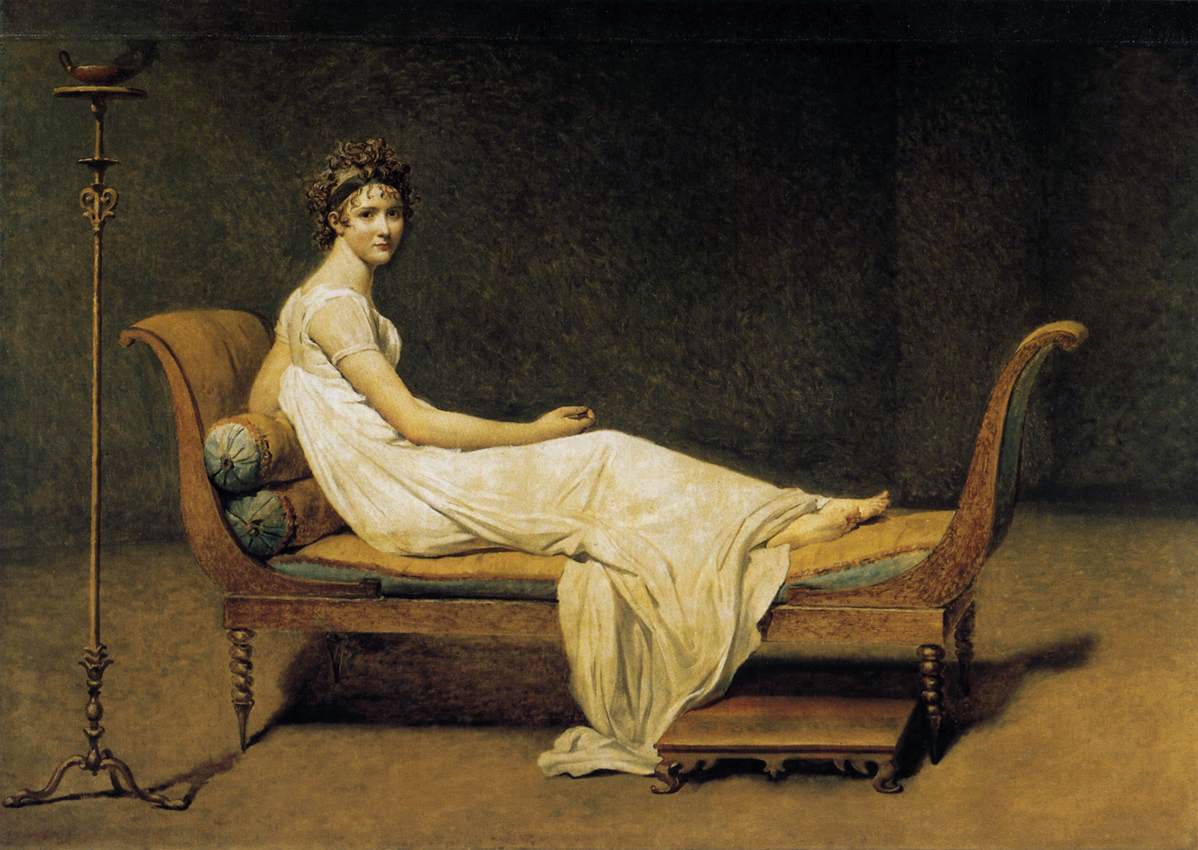 Jacques-Louis David‘s portrait of Madame Récamier (1748 – 29 December 1825) is rather puzzling. It was painted in 1800, after Napoleon Bonaparte‘s coup d’État of 18 Brumaire Year VIII (9 November 1799). Yet Madame Récamier, a society lady who had a salon, is wearing an Empire-style dress. These dresses were simple dresses compared to the heavily girded gowns worn before the French Revolution. Empire-style dresses were often made of mousseline (muslin), a gossamer-like fabric. They were low-neck dresses gathered below a woman’s breasts.[i]

Moreover, Madame Récamier is reclining on a récamier sofa, an Empire-style piece of furniture as is the torchère lamp to the left of David’s painting. There are bookcases in the background, but Jacques-Louis David has left them out of his portrait, focussing on Madame Récamier. In 1802, François Pascal Simon, Baron Gérard, a celebrated French artist, also made a portrait of Madame Récamier sitting on an Empire-style “spoon chair,” a modified bergère, i.e. an armchair without arms.

By 1800, Napoleon was not an emperor. He did not install himself as Emperor until 1804, when he also bestowed the title of Empress, impératrice, on his Créole and aristocratic wife, Joséphine de Beauharnais, née Tascher de La Pagerie. The paintings at the top of this post are by David and Gérard, therefore suggest that, by 18 Brumaire (9 November 1799), although Napoleon had yet to become an emperor. He was First Council and his government was the Consulat. he had already made himself the leader of the French, which is precisely the case. A picture is worth a thousand words. In fact, by 18 May 1799, the Law of 22 Floréal Year VI, a much later even, deprived 106 left-wing deputies of their seat on the Council of Five Hundred, the lower-house.

Although the Consulate may have seemed a triumvirate, it wasn’t. As self-proclaimed premier Consul, Napoleon would be the sole ruler of France. The other two Consuls, Jean-Jacques-Régis de Cambacérès and Charles-François Lebrun, would have little power. In other words, the Consulat would be a form of dictatorship, except that Napoleon was already a hero to the French and was seen as a leader through military might.

The Flight to Varennes and the Levée en masse

In other words, Napoleon was not Place de la Révolution, in Paris, knitting as he watched heads fall. He was on a battlefield fighting foreign powers who had threatened to wage war against France in order to save Louis XVI, Marie-Antoinette, and their two children.

The War in the Vendée, or la Chouannerie

However, Napoleon did not join the Army of the West (1793), the army that would attempt to suppress Royalist uprisings known as la Chouannerie. Paradoxically, the leaders of Revolutionary France were caught somewhat unawares by the War in the Vendée, Brittany. It is as though they did not realize that there were Royalists in France. This war, a civil war, was triggered by the levée en masse, or mass conscription, decreed on 23 August 1793 by the National Convention.

General Thomas-Alexandre Dumas was called upon to help quell la Chouannerie, Royalist uprisings. Thomas-Alexandre accepted this assignment, as generals normally do, except Napoleon. Tom Reiss[ii] tells us that Alex Dumas was a “‘good’ Republican” and “Mr Humanity,” which he may have be, but the War in the Vendée, la Chouannerie,   remains the first genocide in modern history.

The Need for Officers: Opportunity

For Napoleon, opportunity was knocking at the door. Although France had a Grande Armée, its military officers, members of the nobility, had been guillotined or had fled France. There was a gap: no one could lead the Grande Armée. It was therefore possible for Napoleon Bonaparte to rise to power mainly on his own, which he did. By 22 December 1793, at the age of 24, an ambitious Napoleon Bonaparte was a general defending France from angry counter-revolutionary forces. As stated above, unlike Thomas-Alexandre Dumas, Napoleon refused to serve in the Army of the West, against the Chouans, because it would deprive him of the visibility he needed to rise to power.

Instead, he fought the English, by pushed back English royalist forces at Toulon. Furthermore, in 1795, he also defeated royalist rebels marching against the National Convention (13 Vendémiaire year IV; 5 October 1795), “thereby saving the National Convention and the Republic.”[iii] He was then given command of the Army in Italy. Consequently, when he returned to France in 1797, he did so “as the nation’s brightest star, having fully emerged from the need for a patron.”[iv]

The Declaration of Pillnitz  & the Brunswick Manifesto

The royal family’s unsuccessful flight to Varennes (June 20-21, 1791) was construed as counter-revolutionary. It helped radicalize the French Revolution. Two events were particularly portentous. The first was the Declaration of Pillnitz, signed on 27 August 1791 by the Holy Roman Emperor Leopold II, Marie-Antoinette’s brother. As for the second, it was the Brunswick Manifesto (21 July 1792).

Leopold II did not intend to invade France because England would not have joined him, but the French did not know that the Declaration of Pillnitz was a ploy. On 20 April 1792, the French Assembly declared war against Austria.

The Duke of Brunswick attempted to march on Paris, but French Generals François Kellermann and Charles Dumouriez stopped his advance near the northern village of Valmy in Champagne-Ardenne. The Battle of Valmy took place on 20 September 1792.

On 10 August 1792, citizens stormed the Tuileries Palace and killed six hundred of the King’s Swiss guards. On that day, the monarchy was suspended. (See 10 August 1792, Wikipedia.)

“[a]ll unmarried able-bodied men between 18 and 25 were requisitioned with immediate effect for military service. This significantly increased the number of men in the army, reaching a peak of about 1,500,000 in September 1794, although the actual fighting strength probably peaked at no more than 800,000.” (See levée en masse, Fordham University.)

Mass conscription was intended to protect France from attacks by monarchies outside France. Marie-Antoinette’s brother was Holy Roman Emperor Leopold II, so the French could not and did not ignore the Declaration of Pillnitz. As a result, they first declared war on Austria and, a year later, the National Convention decreed the levée en masse caused a civil war while providing Napoleon with a Grande Armée that would become his Grande Armée. The Napoleonic era can be traced back to the levée en masse or Mass Conscription of 23 August 1793:

“[a]s a continuation of the wars sparked by the French Revolution of 1789, they [the Napoleonic wars] revolutionised European armies and played out on an unprecedented scale, mainly owing to the application of modern mass conscription.” (See Napoleonic Wars, Wikipedia).

… mainly owing to the application of modern mass conscription.

In other words, by 1800, because of the Revolutionary wars and “mainly owing to the application of modern mass conscription,” Napoleon was ready to install himself as first Consul and, a few victories later, he would have himself sacred as Emperor of an expansionist himself France. The First Republic had collapsed.

Now we know why Madame Récamier is reclining on an Empire-style récamier, wearing an Empire-style gown. There’s no puzzle. Napoleon’s ascendancy had started years before the Consulate (late 1799) and so had the Empire style. Napoleon had proven invaluable when foreign monarchies threatened to rescue the ill-fated French monarchy, which is the message the French received when they were apprised of the Declaration of Pillnitz (August 1791).  As of that day, the young Republic needed a Napoleon, and Napoleon was at the ready.

Napoleon would remarry because Joséphine (née Tascher de La Pagerie), who had given birth to two children as the wife of guillotined Alexandre de Beauharnais, could no longer conceive. Napoleon wanted a son and married Marie-Louise of Austria, the mother of Napoleon II or Franz, Duke of Reichstadt (20 March 1811 – 22 July 1832) who died at 21, probably of tuberculosis. Contrary to other reports, Joséphine’s divorce from Napoleon did not break her heart, at least not altogether. For one thing, she would now reside at Château de Malmaison, which she had bought for Napoleon. It is a lovely castle, located twelve kilometers away from Paris and decorated in the new style: the Empire style.

At the Château de Malmaison, Joséphine cultivated roses and entertained such dignitaries as kings and tsars. The style she introduced in fashion, lovely light gowns, was comfortable and flattering. Gone were the girded gowns of yesteryear. Joséphine died in 1814, before Napoleon’s demise at Waterloo.

As I noted in my post, entitled The Tennis Court Oath, Napoleon ruled alone, but he respected, to a point, the ideals of the Revolution: liberté, égalité and fraternité. These ideals were perhaps too lofty to be attainable, but they were inspiring and under the ancien régime a young man from Corsica would not have been given the opportunity to transform himself into an emperor. Merit played a role in Bonaparte’s ascendancy.

Moreover, a style emerged which to a certain extent was in the image of an Emperor, except that Madame Récamier had a salon. The French salon, a revered institution, had survived the Revolution and so had Cafés. Everyone, from Voltaire to Robespierre, was a regular, un habitué, of Le Café Procope that has not closed shop since its establishment in 1689.

We have entered a new world.

[i] To be precise, muslin dresses had been introduced by Marie-Antoinette.