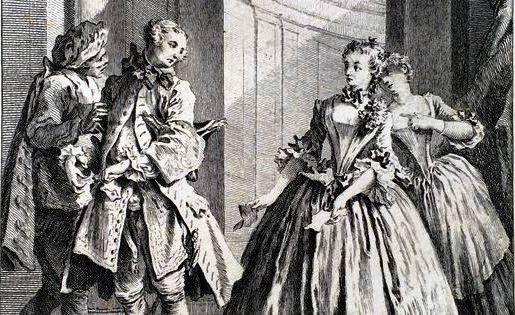 There is recurrence in Molière’s plays. In fact, my colleague James Gaines has published The Molière Encyclopedia. I have yet to read or purchase this book, but I suspect Dr Gaines, whom I met a long time ago, has listed the many jeunes premiers in Molière’s plays. I also suspect he has listed scenes of dépit amoureux (scorned love) and the one play Molière dedicated to that theme or motif. Le Dépit amoureux (1656 [Béziers] and 1659 [Paris]) was performed before Molière’s return to Paris and performed again in Paris, hence the two dates: 1656 and 1659.

The play may not have been committed to paper until Molière returned to Paris and his company became the Company of Monsieur,[1] the name given to the King’s brother. Moreover, a similar play, entitled La Cupidité, had been written by Italian dramatist Niccolò Secchi (see Le Dépit amoureux, Wikipedia). 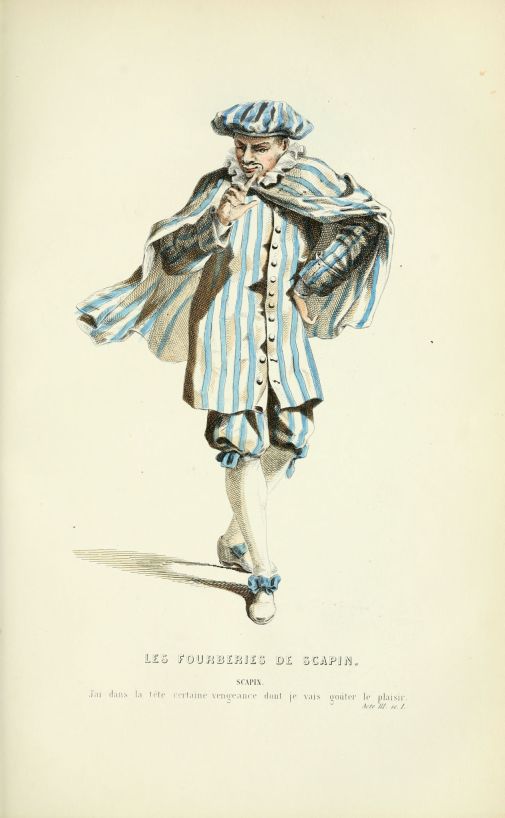 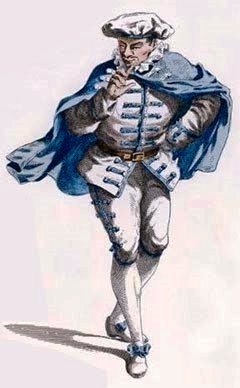 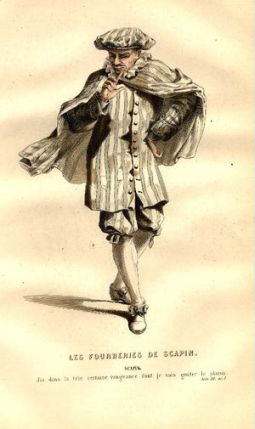 Recurrence happens at many levels. Although Tartuffe (1664 – 1669), Dom Juan (1665) and Le Misanthrope (1666) are independent plays, the plots are the plots of comedy: that of the farcical trompeur trompé (the deceiver deceived), as in the Précieuses ridicules, or the Shakespearean “all’s well that ends well” of most grandes comédies. A comedy may in fact combine both plots, or mythoi, which seems to be the case in Molière’s problematical Tartuffe, Dom Juan and Le Misanthrope.

Moreover, literature has archetypes. The plots mentioned above are archetypal plots. As well, comedy always opposes the eirôn (as in ironic) and the alazṓn, or the blondin and the barbon.

Recurrence may occur within a genre or override genre. Our best source with respect to recurrence in general is Northrop Frye’s Anatomy of Criticism.[2] Archetypes, however, may be rooted in ancient rituals and older comedies: Greek comedy, the Atellan farce, Latin comedy (Plautus and Terrence), the commedia dell’arte. There is in fact a comic text. But let us return to dépit amoureux in Molière.

Dépit amoureux (scorned love) may be a scene. In Act II of Tartuffe, Mariane tells Dorine, her maid, that Valère should fight off obstacles to their marriage. Mariane may well be doubting his love and therefore prone to jealousy. At any rate, in Tartuffe, her helplessness tends to mirror Orgon’s inability to be a tyrannical father without Tartuffe as if humane feelings were a sign a weakness. Orgon empowers Tartuffe who, in turn empowers Orgon. Similarly, Mariane would be at a loss if Dorine, her maid, did not step in to help her avoid a mariage forcé, a forced marriage. Dorine is the descendant of the astute zanni of the commedia dell’arte.

Our characters are the following. The name of maids and valets are between parentheses.

Before the play begins, Valère has married Ascagne, but he thinks he has married Lucile, Ascagne being a male. It is a secret marriage. Valère was the rightful heir to the fortune Ascagne has inherited.

Lucile and Ascagne are the daughters of Albert. If Ascagne had been a son, he would have been heir to a substantial amount of money. A neighbour had a son who died in early childhood. Ascagne, a girl, was given the dead child’s identity.

Lucile asks her maid Marinette to take a message to Éraste. She wants to meet him in the garden that very evening. We learn from Gros-René that Éraste is jealous of Valère (I, 2). The note reassures Éraste. All he needs to do, according to the message, is ask Albert, Lucile’s father, to give him his daughter in marriage:

Éraste and Valère then bump into one another (I, 2). Valère is certain that Lucile loves him. Ascagne confides in Frosine, her maid. She says that she is a woman, that she is in love and that she has married Valère, but that the matter of the inheritance has yet to be resolved (II, 1).

We meet Albert, Lucile’s and Ascagne’s father. He wants to seek advice from the teacher Métaphraste, who is a mere fâcheux, a bore. The arrangement he made troubles Albert. He wants to put an end to his lie. Albert and Polidore, the fathers, meet. Albert wants to return the inheritance (III, 3), but Polidore says that Lucile is romantically involved with Valère, Polidore’s son, which is not acceptable (III, 4). Both fathers decide to repair the harm.

Valère meets Lucile and tells her that their marriage is no longer a secret. Lucile doesn’t know what Valère is talking about. As for Ascagne, who does not see her husband during the day, she is desperate. Her husband thinks he has married her sister. She tells Frosine that she will have to kill herself (IV, 1). Meanwhile, Éraste has decided no longer to love Lucile because she loves Valère (IV, 2). Later, Lucile also decides no longer to love Éraste. It is at this point that dépit amoureux reaches a climax. However, as it reaches a climax, Lucile and Éraste reveal to what extent they loved one another. Éraste walks Lucile home…

A swordsman, La Rapière, offers to help Mascarille and Valère (V, 3). There were duels at the time. 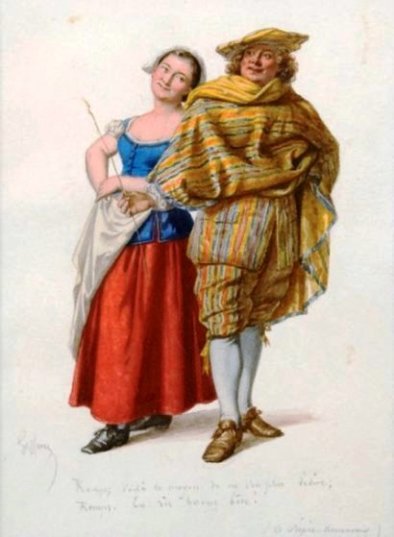 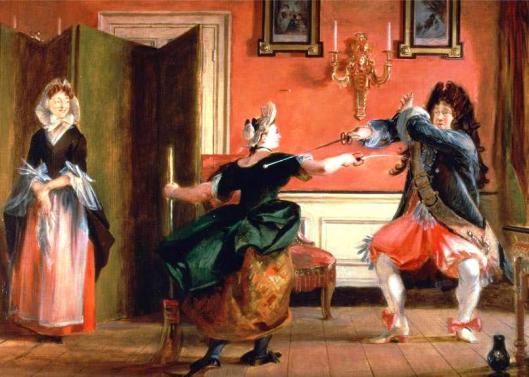 But the moment of recognition has come (V, 4). Polidore arrives and calls Ascagne “ma fille,” my daughter, (V, 5). Valère apologizes to his father (V, 6) whose permission to marry he has not sought. He learns that Ascagne is a woman and that she, not Lucile, is the woman he married. Valère is surprised but he is pleased. He was the rightful heir, but, together, he and Ascagne are the rightful heirs. Valère forgives Lucile and Lucile forgives Valère. There will not be a duel.

Let’s look at the characters once again:

At the end of the play Lucile is about to marry Éraste and Marinette, Gros-René. For comic relief, the dépit amoureux, occurs between both masters and servants.

The Molière 21 project has featured a scene of dépit amoureux. It occurs in Molière’s Les Amants magnifiques, a comédie-ballet, first performed during Carnival season, in February 1670. Pierre Beauchamp was the choreographer and Jean-Baptiste Lully composed the music. 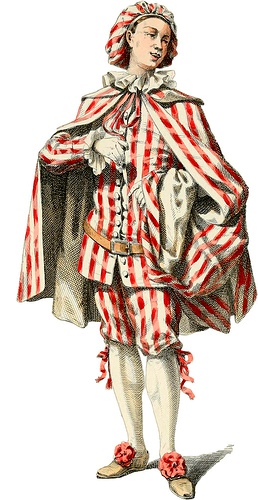 So the time has come to pause.

The dépit amoureux has been dissected. Interestingly, these scenes may start with spite, but the lovers cannot help but disclose their true feelings. There is irony in dépit amoureux.

In his Molière: a New Criticism, Will Moore wonders how Molière could have written so many plays in so little time. W. Moore’s answer to his question is that Molière dealt with the “Res privata: this gave to comedy both the setting and the characters. Molière’s plays deal with the stock comic characters, in everyday situation: parents, children, the doctor, the schoolmaster, the soldier, the valet, relatives, in-laws, suitors.”[5]

As Northrop Frye writes, “‘It’s supposed to be that way.’”[6] Comedies have a happy ending. They are formulaic. However, in the case of Le Dépit amoureux, we have an interesting image. Lucile asks Marinette to take a note to Éraste. She wants to meet him Éraste that very day in the evening and in a garden. The circumstances have changed. Lucile believes Éraste has chosen another spouse. But, having expressed a wish to separate, both tell how much they loved one another, which is how comedies are “supposed” to end.

However, despite the recurrences, each play is new, just as each day is new. It’s matter of intertextualité. Texts are written in the context of literature. So it follows that Molière’s plays are written in the context of comedy as a genre. But Molière’s Dépit amoureux presents a metaphor: the garden. Éraste and Lucile do meet in the garden as Lucile asked at the beginning of the play. Molière’s Dépit amoureux therefore reaches back to the Roman de la Rose, not literally but symbolically. Flowers die and are reborn and die and are reborn…

Therefore matters happen as expected. Éraste meets Lucile at the appointed hour, and they meet in a ‘garden,’ a symbol of fertility.

[1] Monsieur was Philippe de France, duke of Orleans. The brother to the king was the duke of Orleans. Louis Philippe Joseph d’Orléans (13 April 1747 – 6 November 1793) was guillotined during the French Revolution. The House of Orleans was a cadet branch of the Bourbon kings or the House of Bourbon. Louis XIV had one brother.

[3] “At the end of the play the device in the plot that brings hero and heroine together causes a new society to crystallize around the hero, and the moment when this crystallization occurs is the point of resolution in the action, the comic discovery, anagnorisis or cognitio” (Frye, p. 163).

[4] In 17th-century France, lovers, amants, were people in love. The term “lover” did not suggest sexual intimacy. 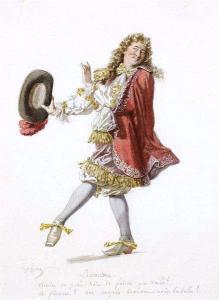