When pain and anguish wring the brow,
A ministering angel thou!

Yesterday, Canada had 31,642 cases of coronavirus

In other words, Quebec has more than half the Canadian cases.

Last weekend, Premier François Legault solicited the help of all physicians in the Province of Quebec, including specialists. Moreover, he has also called on Canada’s government to send qualified members of the Canadian armed forces. As requested by François Legault, the Quebec Premier, Canada is sending 150 medically qualified members the Canadian Armed Forces to relieve a truly overburdened Quebec.

A large number of cases of the novel coronavirus in Quebec are in nursing homes, or long-term care facilities, which is also the case, to a lesser extent, in other provinces. It is believed that Quebecers returning from their March-break may have brought in the coronavirus. Quebec’s March-break occurred earlier than in other provinces. Moreover, many Quebecers travel to Florida to escape Quebec’s harsh winter. Several, retired persons in particular, own a home, in Florida. This could explain, Quebec’s plight.

However, as is well know, the world did not act swiftly when China reported its outbreak of coronavirus. Chinese Dr Li Wenliang, the whistleblower, was reprimanded in early January by Huwan authorities. He died on 7 February 2020. This matter will probably be investigated. Delay in reporting a contagious illness in Huwan did not do anyone any good, in or outside China, but China is not altogether to blame. Quebec locked itself down on 23 March and President Trump of the United States favours an early return to work. The economy is suffering. This could prompt a second wave of the disease.

Quebec physicians are unionized, but broke directives given by their union. A pandemic is an extraordinary event. The sick require the intervention of doctors.

The first American case was a man who had travelled to Wuhan. He returned to Seattle on 15 January 2020 and fell ill a day after his return. On 17 January, the US CDC (Centers for Disease Control) had alerted the authorities. Yet, the surgeon general of the United States, Dr Jerome Adams, has stated that this week: “more than five times as many Americans died from covid-19 last week than were killed in the World War II raid.”

In the United States, the lockdown has been eased. The President wanted to reopen the entire country, but, in the end, the matter was left to the Governor of each state to decide. Contagion has been far more severe in the state of New York. New York City is densely populated.

Yesterday, there were 31,642 confirmed and 11 presumptive cases in Canada. The latest (late yesterday) are higher:

Quebec has not announced an end of the lockdown. A partial and cautious return to work has been announced elsewhere.

When crises occur, political views seem no longer rigidly significant. As for an early and premature return to work, this may not be advisable. However, it may help the morale of persons whose income drops considerably or is terminated. But consider the cost: it could a person’s life and further contagion. Health care practices may also be revisited. One has the right to be treated and to live. Would that I could understand why Dr Li Wenliang was reprimanded. It doesn’t make any sense.

The Creation of Adam (The Verge)

Tom Hanks, Rita Wilson, his wife, and Canadian Prime Minister Justin Trudeau’s wife, Sophie Grégoire, have tested positive for Covid-19. Therefore, Prime Minister Justin Trudeau is in self-isolation, but he can work. Wherever it is possible, people are working from home. Moreover, in certain countries, employees whose benefits do not include paid sick leaves are being supported by their government. I hope that movement will spread because avoiding exposure to the virus is our best weapon. Covid-19 is extremely dangerous, but if we work together, we may defeat it.

Worse than a bomb … a tsunami

The BBC interviewed Italian Dr Giacomo Grasselli who stated that Covid-19 arrived in his country in a manner that was worst than a bomb. Covid-19 spreads quickly, it is agressive, and it is new. It’s a tsunami, says Dr Grasselli (CBC).

Italy was not given sufficient time to prepare. But many countries had time to prepare, at least minimally. They were able to enlarge medical facilities and purchase the materials they require. As well, people are being sent home, so they do not catch the disease and transmit it.

Pandemics are horrible and Covid-19 is a new threat, but I am seeing people working together to save themselves and to save their neighbours. Doctors alone cannot defeat Covid-19. It’s a community project.

Italy had little time to prepare, but the first order of business was containment, which is what Dr Grasselli is advising and which many of us have been given the time to do. However, Covid-19 is nevertheless a surprise and many of us are in denial.

I heard people trivialise the situation, which we can’t. We must keep at a distance from one another, which, in the days of coronavirus, is working together. Covid-19 is real and it is happening.

Two weeks before the bomb fell and multiplied, Dr Grasselli would not have expected the calimity that is unfolding.

I embedded a BBC (British) interview with Italian Dr Giacomo Grasselli (publications) as well as a CBC (Canada) interview. 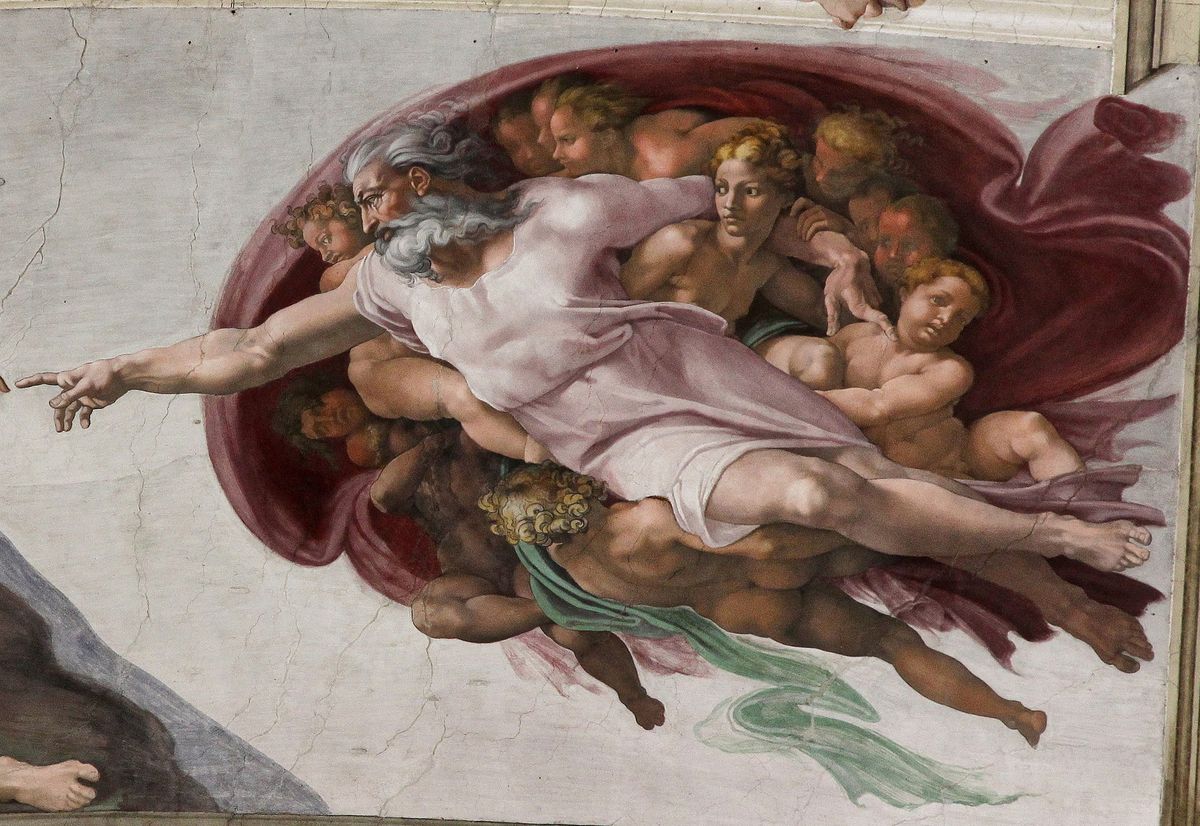 The Creation of Adam by Michelangelo (Wikipedia)