I know of Pietro Bembo from my days as a student of musicology. He is associated with the development of polyphony (many voices) through the madrigal (songs in the mother tongue, as in the Spanish madre), secular songs. However, Pietro Bembo was a writer, not a musician.

As the popularity of madrigals waned, Louis XIV, who loved to dance and was a dancer, hired Italian-born  Jean-Baptiste Lully, or Giovanni Battista Lulli, a composer and dancer. When Molière returned to Paris after spending several years touring France, his Précieuses ridicules (18 November 1659) impressed the court.

I have yet to order my new computer, but when it arrives, we will again be in Italy briefly. Molière created the comédie-ballet. Les Fâcheux was performed at Vaux-le-Vicomte.  Molière wrote the text and Lulli, the music. The ballet accompanying Les Fâcheux (The Bores) was choreographed was Pierre Beauchamp.

A few years ago, I  wrote a post on Vaux-le-Vicomte and, in partiular the feast hosted by Nicolas Fouquet on 17 August 1661, perhaps the most lavish fête in the history of France. Louis XIV had just become king of France. Louis was so impressed that during the fête itself, he decided to destroy Fouquet, or Foucquet. The video I used has been removed and I have yet to find a video that matches the former video.

Would that Giovanni Bellini had given a name to the persons whose portrait he painted. He entitled many of his portraits as Portrait of a Young Man or Portrait of a Man.

I have a new post, I hope to publish today. It is about ballet. Molière created the comédie-ballet in 1661. He created a total of 11.

With kind regards to all of you. ♥

The video shown below is an excerpt from a film entitled Le Roi danse.

Portrait of a Cardinal by Jacopo Bassano, c. 1545

Budapest’s Szépmûvészeti Múzeum is closed at the moment, but one may browse its collections online. Budapest’s “Portrait of a Cardinal” is attributed to Jacopo Bassano.

There is a third portrait of Cardinal Bembo. It was painted by Giovanni Bellini. I believe it is a portrait of a young man, but…

As noted above, Titian did make a portrait of Pietro Bembo, which I presume explains the kerfuffle. Titian’s portrait is a more formal of Cardinal Bembo and it is dated c. 1540. It did occur to me that the portrait held at the Szépmûvészeti was wrongly attributed to Jacopo Bassano, but I doubt it very much.

Jacopo Bassano was a great artist.

The use of the vernacular as a literary language was the subject matter of the post I published on 27 January 2016. In Italy, the vernacular started to replace Latin relatively early and it was called the Petrarchan Movement. Bembo’s “way of making direct imitations of Petrarch was widely influential and became known as bembismo.”[1] According to Pietro Bembo, Petrarch’s use of Italian was a model for the modern Italian language. Petrarch lived in the 14th century (20 July 1304 – 19 July 1374).

Other models were Giovanni Boccaccio (1313 – 21 December 1375) and, to a lesser extent, Dante Alighieri (c. 1265 – 1321). (See Pietro Bembo, Wikipedia.)  In the Italian states, the vernacular, Italian, started to be used as a literary language at the beginning of the 14th century, which is an early date. It precedes the Renaissance which began when the Byzantine Empire fell to the Ottoman Turks, in 1453. However, the scholars who fled to Italy were Greek scholars.

Yes, I am writing my book, despite limitations.

Wishing all of you a very Happy Easter ♥

Portrait of a Young Man by Giovanni Bellini

A few posts ago, I listed two old posts as related articles. One was about the Petrarchan Movement, the other, about Joachim du Bellay.

As for musicians, they too were to set to music texts written in Italian, rather than Latin. In the area of music, Francesco Landini (c. 1325 or 1335 – 2 September 1397) was the first writer of madrigals, a word meaning in one’s mother tongue: madre in Spanish.

As for England, Geoffrey Chaucer (c. 1343 – 25 October 1400), who took the Roman de la Rose to England, he had also advocated the use of English, rather than Latin or French, as a literary language. He translated part of the Roman de la Rose. You may recall that until the end of the Hundred Years’ War, French was spoken at the court of England and Edward VII felt he was a legitimate heir to the throne of France. He wasn’t by virtue of the Salic Law. A woman could not ascend the throne of France. Edward VII’s mother was French. Hence the fratricidal nature of the Hundred Years’ War, a war of succession.

With warm greetings to all of you. ♥ 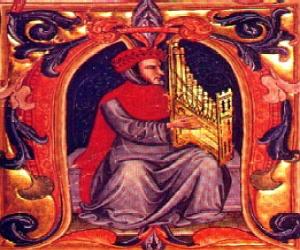