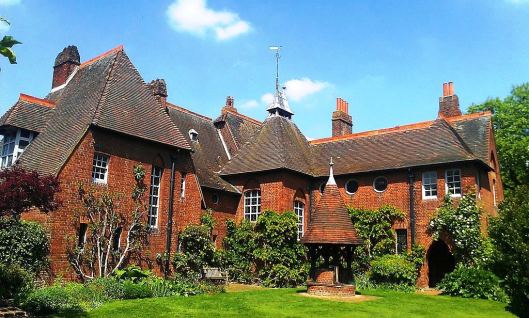 The Arts and Crafts movement is sometimes viewed as a validation of the applied arts. In this regard, it has often been associated with William Blake‘s (28 November 1757 – 12 August 1827) rejection of the “Dark Satanic Mills,” of the industrial age, which it was to a large extent.

The Arts and Crafts movement, however, was also a precursor. It is one of the birthplaces of design and other applied arts. Moreover, because they rejected the industrial age, some members of the movement advocated socialism. Persons working in factories were looked upon as machines and made to work 60 hours a week in an unhealthy environment. Walter Crane (15 August 1845 – 14 March 1915), known mainly as a prolific illustrator, but also a member of the Arts and Crafts movement, was associated with the international Socialist movement and opposed this kind of abuse. William Morris (24 March 1834 – 3 October 1896) was a “socialist activist.” (See William Morris, Wikipedia.)

The Red House was built in Bexleyheath (London). Morris intended it to be his permanent home, but its location was not sufficiently central. Morris therefore moved his family to the more conveniently located Bloomsbury, where he established his company, Morris, Marshall, Faulkner & Co.  (1861-1875), the future Morris & Co.

“The firm’s designs are still sold today under licences given to Sanderson and Sons (which markets the ‘Morris & Co.’ brand) and Liberty of London.”

That part of London had been home to the Bloomsbury Group and, therefore, to Virginia Woolf. Morris and his wife, Jane Burden Morris, Pre-Raphaelite Dante Gabriel Rossetti‘s muse, also rented Kelmscott Manor. It was their summer home.

William Morris is not associated with Japonism, except indirectly. Walter Crane’s illustrations were Japonist, but Crane was an eclectic artist. He also designed tiles and wallpaper. As for William Morris, he epitomizes eclecticism, but he was, first and foremost, a medievalist. He and Sir Edward Burne-Jones met as students at Oxford University and were both attracted to medievalism.

Morris and Burne-Jones shared their interest in the Middle Ages with French author Victor Hugo (26 February 1802 – 22 May 1885) whose Hunchback of Notre-Dame or Notre-Dame de Paris (1831) is a favourite. Morris and Burne-Jones may in fact have been influenced by Victor Hugo. Medievalism was a characteristic of French Romanticism as was exoticism, such as orientalism.

Hugo’s Les Orientales (1829) is an example of orientalism. So are many of Jean-Léon Gérôme‘s (11 May 1824 – 10 January 1904) paintings, a few of which I have used in recent posts. Gérôme was an académicien at about the time académiciens started to fall into disrepute.

When I started rewriting this post, I looked up the entry “Daniel Rabel,” in Wikipedia to get information on the “grotesque” in 17th-century France. The grotesque is associated with the Middle Ages: Quasimodo (the hunchback), gargoyles, misericords, but it resurfaces. I have written posts on stage and costume designer Daniel Rabel‘s “grotesque” ballets de cour. These will be listed separately.

Allow me to finish The Red House. I had nearly forgotten writing about Daniel Rabel, but I remember the Red House.

Kindest regards to all of you. ♥