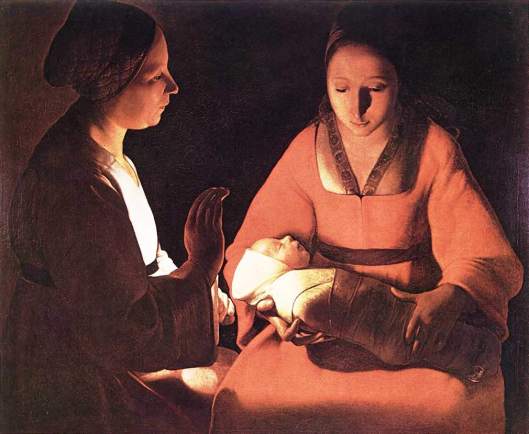 Last year, on Christmas day, I wrote the following post:

A Christmas Offering: Hymns to Mary

We were at Notre-Dame de Paris (NDP), listening to Marian hymns, but Notre-Dame no longer provides the internet with recordings of its liturgical music. However, we have the music it used to provide.

To put it in a nutshell, Marian music consists of approximately 32 hymns (general term), the most important of which are the four antiphons listed below.  At Notre-Dame de Paris, where we are nevertheless traveling, four other Marian hymns are sung daily, one of which is a canticle (cantique in French) or song of praise: the Magnificat.  When Mary heard that her cousin Elizabeth was pregnant, she sang the Magnificat.  Elizabeth’s child was John the Baptist.

The other Marian hymns sung at Notre-Dame are the Hail Mary or Ave Maria, the Angelus and the Ave Maris Stella.  The Angelus is explained at NDP, but not performed.  Every hymn is translated into English.

An antiphon is a call and respond song.  It resembles a refrain.  That is an over-simplification, but a first step.

A canticle is a song of praise such as the Nunc Dimittis.

As stated above, altogether, there are approximately 32 Marian hymns, including the four Antiphons.  However, to these we must add the works of composers who have written oratorios, cantatas, motets and have also set Marian texts to other musical forms.  These may contain music composed for Christmas, the birth of Christ, where Mary is a central character.  To my knowledge, there is no oratorio honoring the Virgin, except segments of larger works.  Examples are J. S. Bach‘s Magnificat (from the Chrismas Oratorio) and parts of Händel’s Messiah.

Given the Catholic Church’s devotion to Mary Mother of God, large musical works are likely to incorporate music to the Virgin.  Oratorios are among large compositions and could be described as long cantatas.  However, they resemble operas.  Oratorios require an orchestra and a choir.  Moreover, they may contain solos or, at times, multi-voice compositions that are not sung by the choir, but by four soloists.

At one point in the history of music, polyphony included more than the four voices we are accustomed to: soprano, alto, tenor, bass or SATB.  We are not discussing such works, many of which are madrigals.  We will focus instead on famous Oratorios associated with the birth, life and death of Christ and usually performed during the Christmas season or at Easter.

A cantata (from the Latin cantare: to sing) is a shorter and less complex work than the oratorio.  It dates back to the early 1600s, which are the years the first operas were composed.  Originally, only one person sang the cantata; it was monophonic.  In this regard, it resembled early madrigals.  But as the madrigal evolved into a multi-voice composition or polyphony, so did cantatas.  We tend to associate cantatas with J. S. Bach who composed approximately 200, one of which, number 142, is entitled the Christmas Cantata: “Uns ist ein Kind geboren” (Unto us a Child is born) is a lovely cantata.

According to late 13th-century theorist Johannes de Grocheio (c. 1255 – c. 1320) motets are “not intended for the vulgar who do not understand its finer points and derive no pleasure from hearing it: it is meant for educated people and those who look for refinement in art.”

As PhD students, my husband and I lived in France for a year.  We rented a house in a village in Normandy, but we went to Paris often. At the time, living in Paris was not expensive, so we also had a Parisian nest: a studio. I loved our studio because it faced a courtyard. We could not hear the traffic and we could see the inner garden.

Sundays were magnificent. We would go to Mass at Notre-Dame and then visit the Marché aux fleurs et aux oiseaux: flowers and birds. I remember small birds that looked like little monks. We would then go and look at the books. There is nothing quite like the bouquinistes de Paris. The books were always wrapped, so I wondered whether or not we would find printed pages once we removed the paper.

(please click on the picture below to enlarge it) 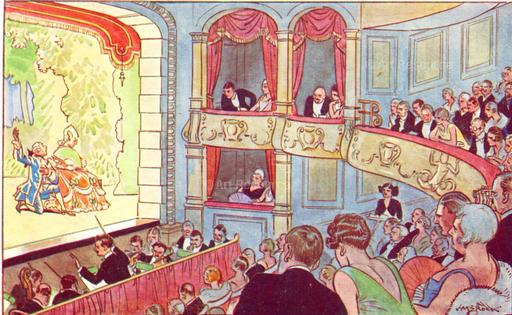 We often went to the theater. I was writing a PhD thesis on Molière, so we attended performances of Molière’s plays. We also saw films and visited museums. While I was scrutinizing the Mona Lisa, the real Mona Lisa, a lady complained that it was much too small a painting. She was so disappointed.

The pictures above were made during the twenties, by a British illustrator: Henry Matthew Brock. They were used for teaching purposes. The twenties happened such a long time ago that they have now become once upon a time… 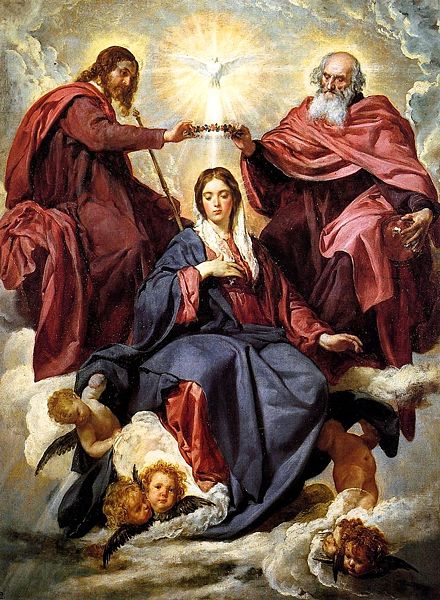 Diego Rodríguez de Silva y Velázquez  (6 June 1599 – 6 August 1660) was a Spanish painter and the most prominent artist at the court of King Philip IV.

In his description of the Ave Regina Cælorum, the Notre-Dame de Paris author wrote:

isn’t spring the time when days get endlessly longer and life sprouts up from root to branch?

As of  tomorrow, 6 April 2012, the Marian Antiphon will be the Regina Cæli and it will remain the seasonal Antiphon until Vespers of Trinity Sunday.  But although the Antiphon will change, we will still celebrate the refreshing newness of seasons and the eternal return of spring.

Immediately below, is our list of Marian Antiphons.  It is probably best to keep them under our eyes.

Please click on the titles to hear the music.

However, let us go to Notre-Dame’s Regina Cæli‘s site and read about the Marian antiphony that begins tomorrow.  So I am quoting:

The most recent Antiphony dedicated to Mary (14th century) used to end services. It is sung during the Easter season and makes no mention of the valley of tears, like the Salve Regina, but instead sings of resurrection and heaven, where Mary reigns alongside her Son. This is how many of Notre-Dame de Paris’s sculptures and windows represent her.

May I suggest that even in the stained glass window shown below there is “no mention of the valley of tears.” (Notre-Dame de Paris author).  Tomorrow, 6 April 2012, we will continue to celebrate the refreshing newness each season brings and the return of Spring.

The Velásquez painting shown at the top of this post represents the Holy Trinity crowning Mary,  She is Regina or Queen of heaven and as I have mentioned in a previous post, I believe her importance in the eyes of Christians is that she seems more accessible than the Trinity.  She is a mother and Christians pray to her because they believe she will convey their prayers to Jesus and to God the Father.  She is a mother, the person to whom we confide our hopes, our fears, our sorrows, our joys.

On the Notre-Dame site you will find an interpretation of the Regina Cæli (just click on the title and scroll down).

I have listed next to the image below previous posts you may wish to refer to.

Marian hymnology and the development of polyphony

Not only is Marian hymnology an immense domain, but it is also an integral part of the story of polyphony. For instance, in the Middle Ages, as polyphonic music was developing, monophonic hymns were sometimes transformed into Motets, a popular polyphonic form. Monks sung and still sing the four Marian Antiphons during the Canonical Hours and do so in Gregorian Chant, hence monophonically, but composers have drawn inspiration in Mariology. The Ave Maria is my best example. This explains the inclusion, in my last post, of polyphonic versions of the four Marian antiphons: Handel, Vivaldi, Mozart…

The Hymns to Mary

There are about 32 songs celebrating the Virgin and these contain the four antiphons. All are listed in Wikipedia, so I will provide the required link: Hymns to Mary.

It is not possible to enter into a discussion of all Marian hymns. For the purposes of this blog, I have therefore chosen to focus on the four prayers that are included in the daily liturgy of Notre-Dame de Paris. The Notre-Dame website is particularly informative. However, services at Notre-Dame are more numerous than in ordinary Parish churches. Some Christians attend Mass daily, but most do so only on Sunday and on Feast days.

1. The Ave Maria or Hail Mary

The Hail Mary or Ave Maria is a prayer composed by Eudes de Sully who was the archbishop of Paris between 1196 and 1208.  Eudes composed the Hail Mary by adding a conclusion to the Marian antiphons “sung during the Annunciation and Visitation festivals.”[ii] The text is based on the words spoken to Mary by the archangel Gabriel.

The Angelus is a prayer introduced by Saint Bonaventure, a disciple of Saint Francis of Assisi (born Giovanni Francesco di Bernardone (1181/1182 – 1226) and a professor of theology in Paris from 1248 to 1257. Saint Bonaventure was also a friend of Saint Thomas Aquinas. He included the Angélus in the services of Franciscan monks when he became general minister of the Friars Minor, in 1257. The Angélus was sung in praise of the “Incarnation of the Son of God three times a day.”[iii] At Notre-Dame, the Angélus is recited each morning before the first mass and it is also recited at noon.

The Magnificat was sung by Mary to her cousin Elizabeth after Elizabeth told Mary she was bearing a child, Saint John the Baptist, at a rather late age. As for Mary, the archangel Gabriel had announced to her that she would bear and give birth to Jesus, the Son of God. The text of the Magnificat “uses the words of several Old Testament songs.”[iv] It is a Thanksgiving or Action de Grâces hymn sung at Notre-Dame in Vespers services. The Magnificat could be the earliest Marian hymn.

It is unlikely that prayers and hymns to Mary I have mentioned constitute a complete répertoire of Marian hymnology. Some undoubtedly belonged to an oral tradition and are lost. In other words, many were not written down, nor were they notated (music).  Notation, as we saw in another blog, starts, quite primitively, with Guido of Arezzo, the author of the Micrologus.

It would be my opinion that what an examination of Marian hymnology reveals, first and foremost, is the degree to which Christians worship the mother of God. The word “intercession” may well hold the key to this phenomenon. Mary is viewed as kind and motherly. She is therefore considered as more likely to hear one’s prayers and convey them to a sterner God the Father and to Jesus of Nazareth, the son of God.

All the great medieval Cathedrals of Europe are dedicated to the Virgin Mary, an eloquent tribute to Mary’s presence in the mind of most Christians.

(Please click on the title to see the video or hear the music.)

Ave Maris Stella
performed by The Daughters of Mary
http://daughtersofmary.net/music.php