The Reign of Terror

The French Revolution is an event one can understand. Its aims were noble: liberté, égalité, fraternité. But the Reign of Terror (5 September 1793 – 28 July 1794) seems incomprehensible. It was a period of unparalleled savagery that ended on 27 July 1794. The following day, 28 July 1794, Maximilien Robespierre and Louis Antoine Léon de Saint-Just (25 August 1767 – 28 July 1794) were guillotined. Saint-Just was the main instigator in the excesses of the Terror, or its “Angel of Death.”

Yet, it is during this horrible period of the French Revolution that slavery was abolished. (See Maximilien de Robespierre, Wikipedia)

On the 4th of February 1794 under the leadership of Maximilien Robespierre, the French Convention voted for the abolition of slavery.

In his Black Count, Tom Reiss[i] writes that

“[t]he story of General Dumas brilliantly illuminates the first true age of emancipation: a single decade during which the French Revolution not only sought to end slavery and discrimination based on skin color but also broke down the ghetto walls and offered Jews full civil and political rights, ending a near-universal discrimination that had persisted since ancient times. (Reiss, p. 11)”

The War in the Vendée: la Chouannerie

General Dumas was called upon to suppress the royalist uprisings in the west of France: the Vendée. (See War in the Vendée, Wikipedia). According to Tom Reiss, Thomas-Alexandre Dumas, now called Alex Dumas, “risked his career to oppose the bloodshed he saw all around him.” Later, a pro-royalist wrote that Dumas was one of those rare generals who were “always ready bravely to sell their lives on the battleground, but resolved to break their swords than consent to the role of executioners” (Reiss, pp. 11-12).

These royalist uprisings are called “chouanneries,” after Jean Chouan (Jean Cottereau’s nom de guerre). They started during the Revolution, but continued beyond 1799. Thomas-Alexandre Dumas was sent to the Vendée in 1794 but he proved a “generous republican.” (Reiss, p. 12) and was called “Mr Humanity” (Reiss, pp. 146-159). 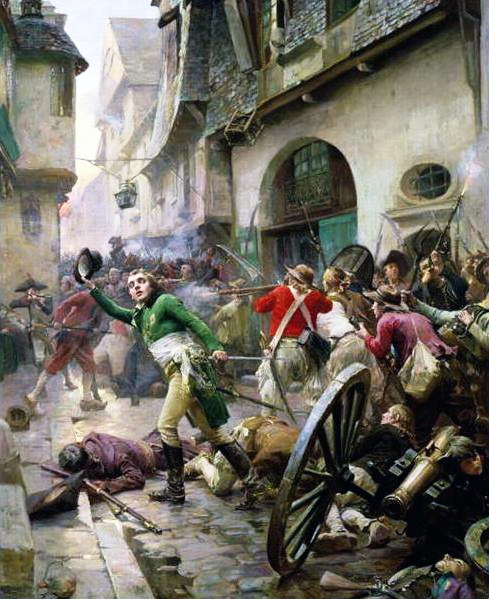 “The Bottom of the Revolution”

Robespierre abolished slavery, but, ironically, once he stood on the top rung of the ladder, he gave himself permission to kill those he had the power to kill. He in fact acted like a slave owner. However, when it hit bottom, the Revolution also ended. It hit bottom on 9 Thermidor Year II (27 July 1794). It had exhausted itself and there was no one left to kill. During the “Reign of Terror,” 16,594 were executed by guillotine, and 25,000, in summary executions all over France.

In closing, I should tell you that the 1833 translation of The Slave-King (simply click on the title), from Victor Hugo’s Bug-Jargal, is online. A more recent translation is available, but it is not online.

“The novel follows a friendship between the enslaved African prince of the title and a French military officer named Leopold d’Auverney during the tumultuous early years of the Haitian Revolution.” (See Bug-Jargal, Wikipedia.)

Moreover, Toussaint Louverture’s story was told by C. L. R. James in his 1989 The Black Jacobins: Toussaint L’Ouverture and the San Domingo Revolution.

The Defence of Rochefort-en-Terre, by Alexandre Bloch, 1885 (Photo credit: Wikipedia)