A 1907 painting by Boris Kustodiev depicting Russian serfs listening to the proclamation of the Emancipation Manifesto in 1861 (Wiki2.org.)

Much of Russia’s history has been a grim tale of the very wealthy and powerful few ruling over a great mass of their poor and powerless compatriots.[1]

According to the writers of the Encyclopædia Britannica, serfdom in Russia did not end when Emperor Alexander II of Russia (29 April 1818 – 13 March 1881) issued the Emancipation Manifesto of 3 March 1861:

Serfdom endured well into the modern era; the years of Soviet communist rule (1917–91), especially the long dictatorship of Joseph Stalin, saw subjugation of a different and more exacting sort.[2]

For our purposes, the emancipation of serfdom in Russia occurred in 1861, and it was “the first and most important of liberal reforms passed during the reign (1855-1881) of Emperor Alexander II of Russia.”[3]

Serfdom was a medieval institution and [t]he vast majority of serfs in medieval Europe obtained their subsistence by cultivating a plot of land that was owned by a lord. This was the essential feature differentiating serfs from slaves, who were bought and sold without reference to a plot of land. In theory, serfs were not slaves, but in practice, many were.[4]

However, only those who worked on the land of private landowners were called serfs. They constituted 38% of the population.

Altogether, three-quarters of the Russian population were peasants, a total higher than serfs who worked on the land of private landowners.

There was, in fact, a third group of peasants living on communes. These peasants lived in village communities called a Mir or an Obschchina. These were communes and they predated serfdom. Mir peasants cultivated one or two strips of land. Holding more strips would have increased a peasant’s tax burden. They belonged to 100,000 landowners. They did not belong to members of a commune, or ‘Mir,’ or Obshchina. (See The Emancipation reform of 1861, Wiki2.org.)

The Mir & the Collectivization of the USSR 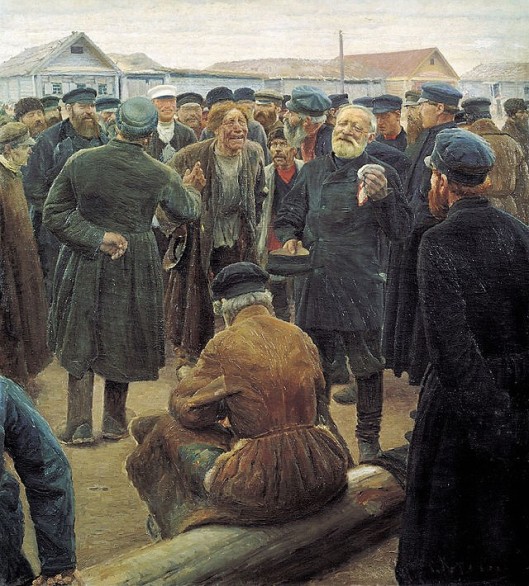 “My intention is to abolish serfdom … you can yourself understand that the present order of owning souls cannot remain unchanged. It is better to abolish serfdom from above, than to wait for that time when it starts to abolish itself from below. I ask you to think about the best way to carry this out.”

I should note that:

“[m]any bureaucrats believed that these reforms would bring about drastic changes which would only affect only the ‘lower stories’ of society, strengthening the autocracy. In reality, the reforms forced the monarch to coexist with an independent court, free press, and local governments which operated differently, and more freely, than they had in the past. This new form of local government involved in each area an assembly called a zemstvo.” (See The Emancipation reform of 1861, Wiki2.org.)

The Tsar and his advisors wondered whether freed serfs should hold the land they had tilled. Given that a large number of insurrections that had taken place in western Europe in 1848, it was decided that freed serfs could own land. (See Revolutions of 1848, Wiki2.org.) However, the land was not given to them. Some serfs had money and could buy land. But, by and large, they couldn’t. Some continued to work for a landowner to earn money. Others, if not most, borrowed from the government and made redemption payments, of which they were relieved in 1905, the year of the massacre of Bloody Sunday.

“The peasants remained ‘temporarily bonded’ until they redeemed their allotments.”[5]

Ironically, redemption payments transformed former serfs into slaves. Debt bondage is a form of slavery. As for those serfs who found employment in factories, as we now, their wages were low and their working hours, very long: some 15 hours a day. Workers went on strikes, which led to Bloody Sunday.

“It is estimated that between October 1905 and April 1906, 15,000 peasants and workers were hanged or shot, 20,000 injured, and 45,000 sent into exile.” (See Bloody Sunday, Wiki2.org.) It was a peaceful demonstration. Workers were carrying a petition. As of Bloody Sunday, Russians ceased to see their Tsar as a father to the nation.

The abolition of serfdom was good in itself. As Tsar Alexander II stated ,“the present order of owning souls cannot remain unchanged.”  Serfs were emancipated in 1861. Landowners could no longer own serfs, domestic or farmers. Furthermore, Russia’s economy grew after the serfs were freed. Many former serfs were working in factories, domestic serfs especially. They could not own land.

“A significant measuring stick in the growth of the Russian economy post-reform was the huge growth in non-gentry private landownership. Although the gentry land-holdings fell from 80% to 50%, the peasant holdings grew from 5% all the way to 20%.”

Yet, there was social unrest (strikes, etc.) and, after Bloody Sunday (1905), confidence in the Tsar having waned, the Bolchevik party had an opportunity to take over. We then suffered through the Cold War.

But the greatness of Russia remains. As a child, the librarian could not let me borrow certain masterpieces of French literature. Several were on the Index of prohibited books. She directed me to the Russian literature shelves of the Public Library. I read Leo Tolstoy and Dostoevsky. I wish I could thank that librarian. The first piece of music I was introduced to was Mussorgsky’s Night on Bald Mountain.

This post contains many quotations. I did not want to make errors. However, I have left out the Crimean War. Russia’s defeat is a factor in the emancipation of serfs and the role Tsar Alexandre II played in liberating Bulgaria. (See The Russo-Turkish War of 1877-1878, Wiki2.org.) Tsar Alexander II was killed by a bomb in 1881. His legs were torn off and he was otherwise fatally injured.

The Emancipation Reform: the full text.  ↩

“The peasants remained ‘temporarily bonded’ until they redeemed their allotments. The redemption price was calculated on the basis of all payments received by the landlord from the peasants before the reform. If the peasant desired to redeem a plot, the government paid at once to the landowner the whole price (in 5 percent bonds), which the peasant had to repay to the exchequer in 49 years. Although the government bonds fell to 77 percent and purchase was made voluntary, the great majority of landowners—often in debt—preferred to get the money at once and to end relations which had become insupportable. By 1880, 15 percent of the peasants had not made use of the redemption scheme, and in 1881 it was declared obligatory. The landowners tried, but in vain, to keep their power in local administration. The liberated peasants were organized in village communities that held comprehensive powers over their members. Nominally governed by elected elders, they were actually administered by crown administrative and police officials.” (Britannica)

However, I have selected an excerpt from Shostakovich’s Piano Concerto No. 2, the Andante, or 2nd movement.