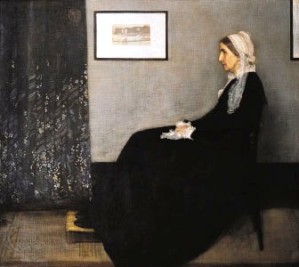 There is more to say about Reynard and motifs, but all I can send my readers today are pictures of the women in the life of American-born London-based artist James Abbott McNeill Whistler (July 10, 1834 – July 17, 1903).  I have been sick with migraine for the last two days.  The second part of my blog will be posted later.

The two loves of Whistler’s life were Joanna “Jo” Hiffernan (ca. 1843 – after 1903) and Maud Franklin (9 January 1857 – ca. 1941).  Joanna had been Whistler’s model and helped him raise his son Charles James Whistler Hanson (1870–1935) the result of an affair with a parlour maid, Louisa Fanny Hanson.  Whistler’s mother never learned about her grandson.

Whistler painted a portrait of Joanna which he showed at the 1863 Paris Salon des Refusés (the Exhibition of Rejects [non Academic works]) at the same time as  Édouard Manet‘s showed his Déjeuner sur l’herbe (1862-1863).  Manet’s painting caused a scandal, but Whistler’s Symphony in White, No. 1, a work in the manner of the Pre-Raphaelites, did not go unnoticed.  On the contrary.   We also have a painting of Maud, Arrangement in White and Black, 1876.

In 1888, Whistler married Beatrice (“Trixie”) Godwin (née Beatrix Birnie Philip).  She had been his pupil and model.  She was the former wife of architect Edward William Godwin.  They first lived in Paris but returned to England when she was diagnosed with cancer.  “Trixie” posed for Harmony in Red Lamplight, 1886.  They lived in the Savoy Hotel until her death in 1896.  Trixie was 39 at the moment of her death.  Whistler himself died seven years later.

However the woman who dominates Whistler’s life is his mother, born Anna Mathilda McNeill (September 27, 1804 – January 3, 1881). James’ mother had Southern roots.  Whistler enjoyed looking upon himself as an “impoverished Southern aristocrat.”  James did not want to have been born in Lowell, Massachusetts.  Later in life, when he sued John Ruskin for libel, he insisted he was born in Saint Petersburg.

After Whistler settled in England, in the 1860s, she joined him.  She did not like her son’s bohemian lifestyle, so accommodations had to be found for “Jo.”  Yet, the most famous of Whistler’s painting is the now iconic Arrangement in Grey and Black, No. 1: The Artist’s Mother (1871–72), a portrait of Whistler’s mother.  When she died, he added her name, McNeill, to his.

I will pause here…