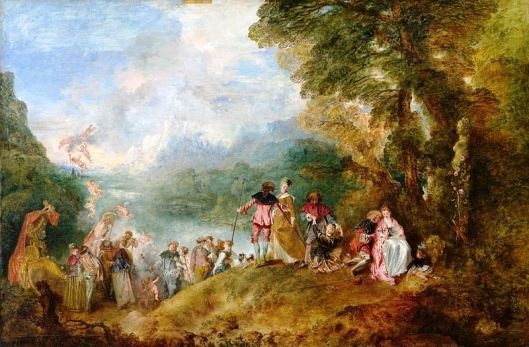 Despite the use of the word “for” (pour), it would appear that Jean-Antoine Watteau‘s (10 October 1684 – 18 July 1721) The Embarkation for Cythera (Louvre version)[1] depicts “a departure” from the island of Cythera, the birthplace of Venus. According to Wikipedia, whose sites dealing with our subject have just been maintained, it symbolises “the temporary nature of human happiness.” (See Fêtes galantes, Wikipedia).

Consequently, the characters portrayed in The Embarkation for Cythera are not leaving our imperfect world to travel to the land of love, a land resembling Madeleine de Scudéry‘s (15 November 1607 – 2 June 1701), famous carte de Tendre, or map of Tendre. They are returning from Cythera.

The term fêtes galantes was adopted by the French Academy in 1717 when Watteau handed in his reception piece to the Académie royale de peinture et de sculpture. It refers to a “courtship party,” such as a masquerade ball that borrowed from the commedia dell’arte. In particular, the term Fêtes galantes refers to the paintings of Jean-Antoine Watteau who died of tuberculosis at the age of 36, in 1721. There had never been paintings such as Jean-Antoine Watteau’s. (See Fêtes galantes, Wikipedia.) Watteau therefore set a trend. Jean-Honoré Fragonard, François Boucher, Nicolas Lancret and other 18th-century artists also depicted Fêtes galantes. It became a favourite subject matter and it fits the reign of Louis XV (Louis quinze). 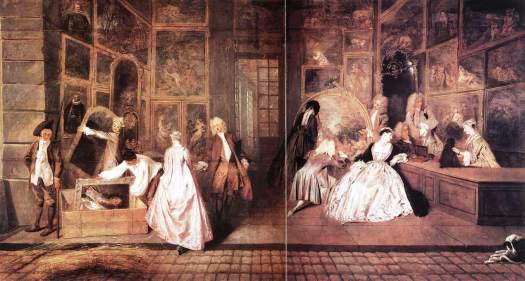 The Embarkation for Cythera is a painting rather than a text.  After Watteau, however, Fêtes galantes re-entered literary works and music. The best-known literary Fêtes galantes is a collection of poems by Paul Verlaine, published in 1869. The theme also suffuses Pierre Louÿs’ Les Chansons de Bilitis.

Verlaine’s Fêtes galantes were a source of inspiration to composers Gabriel Fauré,  Claude Debussy, and Reynaldo Hahn, among others.

The term Fêtes galantes has roots in both 17th-century honnêteté and préciosité. As mentioned above, there was, on the one hand, a galant  homme. He was an honnête homme and at times a précieux. On the other hand, there was un homme galant or a womanizer. The homme galant, was unlikely to be invited to salons, with the possible exception of persons such as Giacomo Casanova (2 April 1725 – 4 June 1798).

In early salons, the main activity of salonniers and salonnières was literature, witty literature. Salonniers and salonnières engaged in “word games,” or the creation of ingenuous little poems. For instance, they would be given the end of lines of poetry to which they had to attach a beginning. These bouts-rimés (rhymed ends), as they were called, demanded inventiveness and substantial linguistic skills. A main characteristic of salon literature, poems mainly, is the use of the conceit (la pointe).

However, salonniers and salonnières savoured pastoral romances such as Honoré d’Urfée‘s L’Astrée and heroic romances. Occasionally, they played shepherds and shepherdesses, which were flights from reality, as would be, to a certain extent Paul Verlaine‘s hedonistic and somewhat decadent fin de siècle Fêtes galantes. In other words, despite préciosité, love was a main interest in salons.

In fact, to be understood, galanterie must be contextualized. Paul Verlaine’s poems were hedonistic, but they were poems and therefore fictional. There is a Cythera, but Venus is a mythological figure. Madeleine de Scudéry‘s (15 November 1607 – 2 June 1701), carte de Tendre, or map of Tendre, published in Clélie, histoire romaine, is a product of the imagination. Yet, préciosité is a moment in the history of love. Précieuses were real women.

One instance of précieux love is the fourteen-year courtship Julie d’Angennes FR (1607 – 15 novembre 1671), Madame de Rambouillet‘s daughter, imposed on the Charles de Saint-Maure, duc de Montausier. Here, however, one senses genuine apprehensions: pregnancy, childbirth, and infant mortality. On her 35th birthday, Montausier gave Julie the exquisite Guirlande de Julie[2] a collection of 62 madrigals,[3] but Julie made the Duke wait five more years. This is how “precious” and perhaps frightened she was. They married on 15 July 1645 and, although the Duc de Montausier was an honnête homme and a galant homme, he was un homme. Julie got pregnant and gave birth to a daughter.

Préciosité, as mocked in Molière’s Précieuses ridicules (1659), was short-lived. However, as noted above, préciosité or  disembodied love is a milestone in the history of love. It belongs to the querelle des femmes, the woman question. It therefore differs from chivalry and the Roman de la Rose, which promoted courtly love without rejecting sexual intimacy.

Italian-born Catherine de Vivonne, Marquise de Rambouillet (1588 – 2 December 1665) opened the first salon: L’Hôtel de Rambouillet, rue Saint-Thomas-du-Louvre. Its Catherine de Vivonne called herself Arthénice, an anagram of Catherine. Hôtels were private residences (un hôtel particulier) and salon hostesses received once or twice a week. The hostess usually sat in bed and her guests were in a ruelle, literally and alley way, on a side of the bed. Madame de Rambouillet received in her blue room, la chambre bleue. Occasionally, salonniers and salonnières went on a picnic. That outing was called un cadeau, a gift. When the Marquise closed her salon, Madeleine de Scudéry (15 November 1607 – 2 June 1701) opened hers. Mademoiselle de Scudéry never married.

In Fêtes galantes personal sentiment is masked by delicately clever evocations of scenes and characters from the Italian commedia dell’arte and from the sophisticated pastorals of 18th-century painters, such as Watteau and Nicolas Lancret, and perhaps also from the contemporary mood-evoking paintings of Adolphe Monticelli.[4]

Fêtes galantes are associated with the commedia dell’arte. Actors were, as in ‘to be,’ “masks.” As well, the sad clown is an archetype. Masquerade balls have survived. Balls go back to the ballet de cour. They are courtly and have a counterpart in festivals and carnavals.

The Laws of Gallantry

Charles Sorel, who was named the historiographer of France in 1635, wrote Les Loix de la galanterie, first published in 1644, but galants met and discussed the rules of gallantry.

The terms honnête homme and galant homme are no longer used, nor is the term gentilhomme. The honnête homme is now called a gentleman in both French and English. The word gallant has survived and is used to describe men who still open the door of a car to help a woman out or hold a heavy door when a fragile individual enters or leaves a building or are very polite. The term “grande dame” is used to describe particularly accomplished women, including women who had a salon.

Fêtes galantes now belong to the discourse on love refined or “galant,” but love as depicted in Watteau’s ethereal Fêtes galantes.