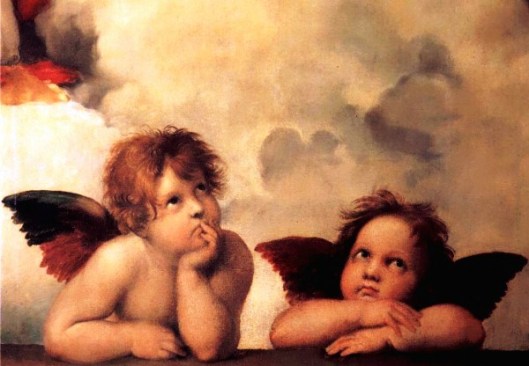 Today, 2 February 2015, we are entering the Marian year’s second season, the first takes us from Advent to Candlemas (la Chandeleur), once an observed feast commemorating the presentation of the child Jesus at the Temple. The second lasts until Good Friday.

In the Church of England, today, Candlemas, is the end of the Epiphany season which follows the Christmas season.

The “Nunc dimittis” or Canticle of Simeon (Cantique)

Also sung today is the Nunc dimittis (“Now you dismiss…,” Luke 2:29–32), The Song of Simeon or Canticle of Simeon). Simeon had been promised he would see Jesus and did.  A canticle is a song of praise. In this respect, the Nunc Dimittis resembles the Magnificat, or Canticle of Mary.  Mary sang the Magnificat when she heard her cousin Elizabeth was with child. To listen to the Nunc Dimittis and read its story, simply click on one of the links below:

Moreover, today is Groundhog Day. How long will winter last? See the link below.

The Labours of the Months

Greek poet Hesiod, who is believed to have been active between 750 and 650 BCE, wrote Works and Days, a book Wikipedia describes as a farmer’s almanac. In Works and Days, he is teaching his brother Perses about the agricultural arts. (See Works and Days.)

Although we are leaving the first Marian season, I am including both the Alma Redemptoris Mater and the Ave Regina Cælorum.

During Canonical Hours, the Antiphon (antienne) is a liturgical chant that precedes and follows a Psalm or a Canticle.  In a Mass, it is also a chant to which a choir or the congregation respond with a refrain.  It is therefore a call and response chant.

Hesiod’s Works and Days (r. 700 BCE) is an online publication (click on the title). 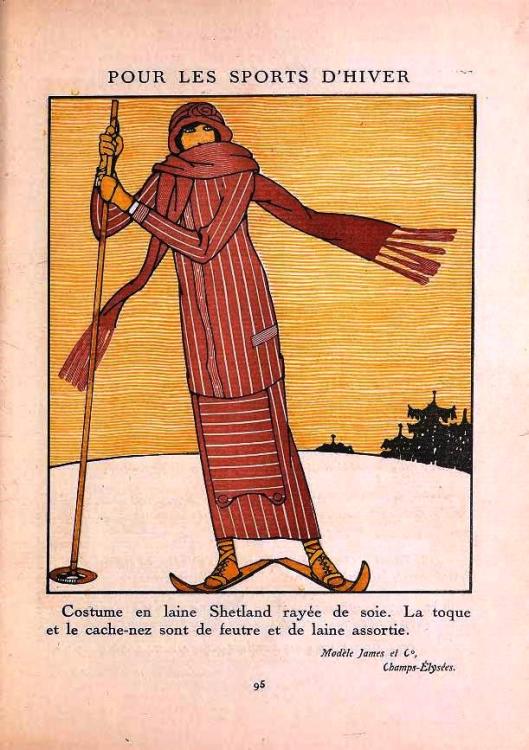 I am using this light-hearted “pochoir” to wish my faithful readers a very Happy New Year.

Let us hope 2015 will be a better year. There were sad events in 2014: terrorism, racism…  Moreover, on 4 November 2014, money made room in Congress for Republican candidates who may not otherwise have been elected into office. Money should not buy aspiring politicians a seat in Congress or, in the case of Canada, a seat in Parliament.

The date I want to remember is 4 November 2008. On that day, Americans elected to the presidency of the United States an exceptionally gifted and accomplished gentleman who cares for his people and has earned considerable respect for his country wherever he has travelled.

You have become very dear to me so I hope health issues will not prevent me from reading your posts and writing mine in 2015.

A HAPPY NEW YEAR TO ALL OF YOU.

The Alma Mater Redemptoris is the Marian Antiphon of the season. I have therefore inserted a lovely interpretation of Palestrina’s Alma Mater Redemptoris at the foot of this post. On 2 February 2015, formerly Candlemas but now groundhog day, we will switch to the second of four Marian antiphons, the Ave Regina Cælorum. 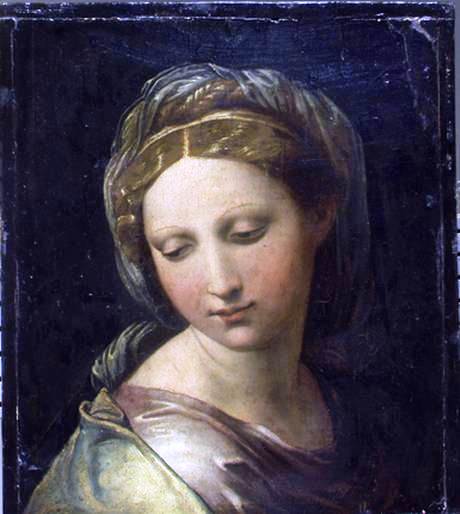 The following is a collection of various posts on the Virgin Mary.  The music Mary has inspired is varied and a delight to music lovers.  So are paintings of Mary who is called Theotokos in the Eastern Church.

In French, Antiphons are called antiennes and the “t” is pronounced as if it were a “c”.  However, books containing antiennes are called Antiphonaires.  There are no Marian anthems.  An Anthemn is a different musical form.  In fact, anthems resemble Catholic motets.

The four Marian Antiphons are sung during a certain period of the liturgical year.  The Antiphon used at this particularly moment is the Alma Mater Redemptoris. On February 2, it will be the Ave Regina Cælorum. However, Marian liturgy is further divided into eight periods and 32 feast days.

I am not an expert on Mariology, but I have studied and still study liturgy as a musical form.

During Canonical Hours, the Antiphon is a liturgical chant that precedes and follows a Psalm or a Canticle.  In a Mass, it is also a chant to which a choir or the congregation respond with a refrain.   It is therefore a call and response chant.

Canticles are hymns sung during the Canonical Hours.  Seven find their origin in the Old Testament and are sung at Lauds. Three, however, are contained in the Gospel according to Luke. 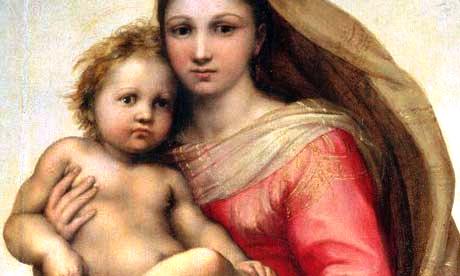 Marian hymnology and the development of polyphony

Not only is Marian hymnology an immense domain, but it is also an integral part of the story of polyphony. For instance, in the Middle Ages, as polyphonic music was developing, monophonic hymns were sometimes transformed into Motets, a popular polyphonic form. Monks sung and still sing the four Marian Antiphons during the Canonical Hours and do so in Gregorian Chant, hence monophonically, but composers have drawn inspiration in Mariology. The Ave Maria is my best example. This explains the inclusion, in my last post, of polyphonic versions of the four Marian antiphons: Handel, Vivaldi, Mozart…

The Hymns to Mary

There are about 32 songs celebrating the Virgin and these contain the four antiphons. All are listed in Wikipedia, so I will provide the required link: Hymns to Mary.

It is not possible to enter into a discussion of all Marian hymns. For the purposes of this blog, I have therefore chosen to focus on the four prayers that are included in the daily liturgy of Notre-Dame de Paris. The Notre-Dame website is particularly informative. However, services at Notre-Dame are more numerous than in ordinary Parish churches. Some Christians attend Mass daily, but most do so only on Sunday and on Feast days.

1. The Ave Maria or Hail Mary

The Hail Mary or Ave Maria is a prayer composed by Eudes de Sully who was the archbishop of Paris between 1196 and 1208.  Eudes composed the Hail Mary by adding a conclusion to the Marian antiphons “sung during the Annunciation and Visitation festivals.”[ii] The text is based on the words spoken to Mary by the archangel Gabriel.

The Angelus is a prayer introduced by Saint Bonaventure, a disciple of Saint Francis of Assisi (born Giovanni Francesco di Bernardone (1181/1182 – 1226) and a professor of theology in Paris from 1248 to 1257. Saint Bonaventure was also a friend of Saint Thomas Aquinas. He included the Angélus in the services of Franciscan monks when he became general minister of the Friars Minor, in 1257. The Angélus was sung in praise of the “Incarnation of the Son of God three times a day.”[iii] At Notre-Dame, the Angélus is recited each morning before the first mass and it is also recited at noon.

The Magnificat was sung by Mary to her cousin Elizabeth after Elizabeth told Mary she was bearing a child, Saint John the Baptist, at a rather late age. As for Mary, the archangel Gabriel had announced to her that she would bear and give birth to Jesus, the Son of God. The text of the Magnificat “uses the words of several Old Testament songs.”[iv] It is a Thanksgiving or Action de Grâces hymn sung at Notre-Dame in Vespers services. The Magnificat could be the earliest Marian hymn.

It is unlikely that prayers and hymns to Mary I have mentioned constitute a complete répertoire of Marian hymnology. Some undoubtedly belonged to an oral tradition and are lost. In other words, many were not written down, nor were they notated (music).  Notation, as we saw in another blog, starts, quite primitively, with Guido of Arezzo, the author of the Micrologus.

It would be my opinion that what an examination of Marian hymnology reveals, first and foremost, is the degree to which Christians worship the mother of God. The word “intercession” may well hold the key to this phenomenon. Mary is viewed as kind and motherly. She is therefore considered as more likely to hear one’s prayers and convey them to a sterner God the Father and to Jesus of Nazareth, the son of God.

All the great medieval Cathedrals of Europe are dedicated to the Virgin Mary, an eloquent tribute to Mary’s presence in the mind of most Christians.

(Please click on the title to see the video or hear the music.)

Ave Maris Stella
performed by The Daughters of Mary
http://daughtersofmary.net/music.php 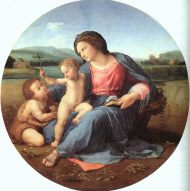