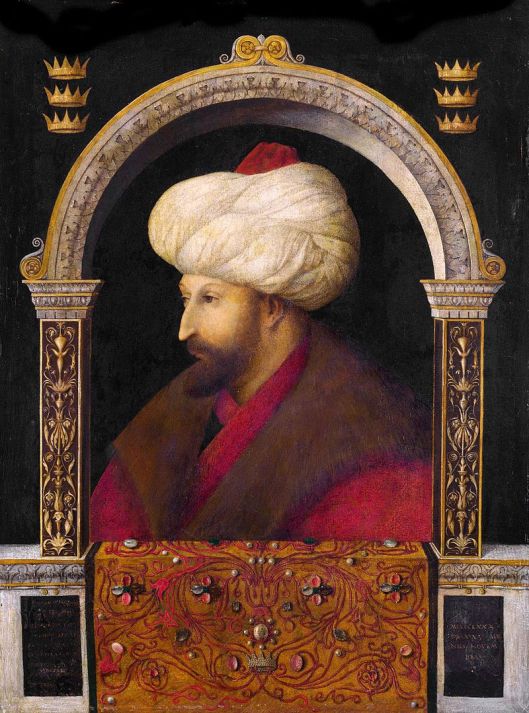 The West has an older Orient, older than the paintings of 19th-century artists, lured by East, but depicing a Eurocentric Orient, a colonized Orient.

Our older Orient is, for instance, Marco Polo’s Orient, the Orient of merchants. It is as traders that Europeans, the West, first interacted with the East. That Orient would lead to the age of discovery and, eventually, to colonialism. However, that Orient, the Far East, mesmerized Venetian merchant Marco Polo (1254 – 8-9 January  1324) who travelled the silk road (114 BCE – 1450s CE), a pathway that had been used for more than a thousand years and which Marco Polo probably improved.The silk road took Marco Polo to China. He met Kublai Khan (23 September  1215 – 18 February 1294), the Conqueror who established the Yuan Dynasty and was the first Emperor of China. In this case, the conqueror was Kublai Khan, the East, not Marco Polo. Marco Polo served Kublai Khan for twenty years.

Consequently, had a European artist made a portrait of Kublai Khan, it would have been the portrait of a conqueror as is the portrait of Mehmed II the Conqueror or Mehmet II (30 March 1432 – 3 May 1481) made by Gentile Bellini (c. 1429 – 23 February 1507) in 1480 and featured at the top of this post. Mehmed II conquered Constantinople, the current Istanbul, in 1453 vastly expanding the Muslim world to include Eastern Europe. In 1479, Venice summoned Gentile Bellini, a portraitist of the School of Venice, to travel to Constantinople and make a portrait Sultan Mehmed II, or Mehmet II.

The Wikipedia entry on Gentile Bellini describes Gentile as one the “founders of the Orientalist tradition in Western painting.”

“In 1479 he was sent to Constantinople by the Venetian government when the Ottoman Sultan Mehmed II requested an artist; he returned the next year. Thereafter a number of his subjects were set in the East, and he is one of the founders of the Orientalist tradition in Western painting. His portrait of the Sultan was also copied in paintings and prints and became known all over Europe.”
(See Gentile Bellini, Wikipedia.)

Here, it would appear the term Orientalism is used upside down. But it could be that the term Orientalism is pluralistic. One knows the meaning of the word because of the context in which it is used. Mehmed II was a Conqueror, not the conquered. If one had to attach tags to the portrait featured at the very top of this post, terms such as portraiture, Italian, and the school of Venice may well precede Orientalism. But Gentile Bellini’s famous portrait is nevertheless the portrait of a very powerful Ottoman Sultan, one of the most powerful Ottoman Sultans in history. The word  “Orientalism” may be patronizing when applied to the 19th-century genre depicting the colonized and powerless East, but in cannot be when the content is the portrait of a Conqueror.

However, this portrait can be linked to the Sykes-Picot Agreement of 1916, when England, France, and a collapsing Imperial Russia patronizingly partitioned the Ottoman Empire, which it expected to defeat and defeated. In 1922, during the Turkish War of Independence (19 May 1919 – 24 July 1923), the Sultan was sent into exile and two years later the Caliph was removed. The Ottoman Empire had lasted 700 years, from the 13th century until the 20th, but it did not defeat the Byzantine Empire until 29 May 1453. It had survived the decline and fall of the Western Roman Empire (4 September 476),  but it had broken with the Western Church in 1054 CE (See Fall of the Roman Empire, Wikipedia and Defeat and dissolution Fall of the Ottoman Empire, Wikipedia.)

The Byzantine Empire had followed the Roman Empire, but Constantinople had been called Byzantium until the Christian Church as an institution was founded in 325 CE, at the First Council of Nicaea, by Roman Emperor Constantine the Great. After the Great Schism of 1054 CE, it became the Holy See of Orthodox Christianity. (See Fall of the Roman Empire, Wikipedia.)

So Gentile Bellini, was an Orientalist of a different orientation. When he was in Turkey and Greece, he could not resist sketching Turks and other Muslims, but he was not depicting colonized individuals. Other members of the Venetian School also painted the Orient. 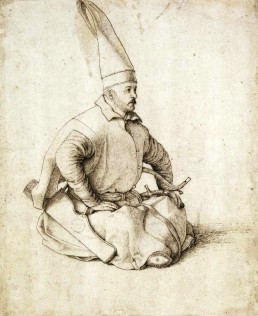 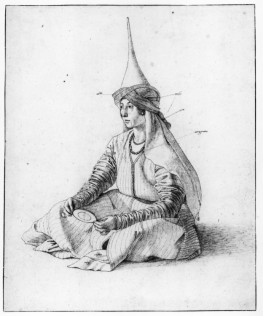 In a sense Marco Polo resembles our 19th-century Orientalists. Marco Polo documented his Orient by narrating his travels. He was fascinated by the lands he travelled, the people he met, and the animals he saw, animals unknown in Europe. He therefore told his  story to Rustichello da Pisa who became the co-author, or amanuensis, of The Travels of Marco Polo (c. 1300), also entitled Il Milione and Le Livre des merveilles du monde. Marco Polo’s Il Milione was written in Medieval French. Rustichello and Marco were prisoners in Genoa when Marco narrated his story, which means that Le Livre des merveilles du monde is an example of prison literature.

The Travels of Marco Polo was a bestseller. The book inspired cartographer Fra Mauro, a Benedictine monk who died in 1464. More importantly, Italian navigator Christopher Columbus (31 October 1450 and 30 October 1451 in Genoa – died on 20 May 1506 in Valladolid) found a Latin copy of Il Milione which he annotated. Marco Polo was a merchant, so, as mentioned above, trade was the first way East and West interacted.

Matters would change. Marco Polo’s book may also have influenced Portuguese explorer Vasco da Gama (c. 1460s – 24 December 1524), who departed Lisbon on 8 July 1497 and was the first European to reach India by sea linking the Atlantic Ocean (the West) and the Indian Ocean (the East). Once again, trade was the motive: the spice trade. Portugal wanted to  undermine the Republic of Venice whose merchants  could travel safely by land to purchase the spices of the Orient. Vasco da Gama was appointed Viceroy of India in 1524, by the king of Portugal.

Vasco da Gama committed acts of cruelty. For instance, he locked 400 Muslim pilgrims, including 50 women and their babies, and, after their ship was looted, he had his prisoners burned to death. This incident is named the Pilgrim ship incident. (See Vasco da Gama, Wikipedia.)

Beginning in the 11th century, Crusaders were influenced by the magnificent carpets of the Orient many of which contained silver and gold and displayed the mille-fleurs motif, which was a favourite.

The last Crusade was the conquest of the Constantinople, in 1453, but the Crusades began in the 11th century. Oriental motifs had therefore entered Europe quite early in the Middle Ages. The Apocalypse Tapestry, which consisted of large number of panels, 90, was made between 1377–1382, by Jean Bondol and Nicholas Bataille. It is undeniably astonishing. Several panels were damaged or destroyed, but those that survived are housed in the Château d’Angers, France. The more famous Lady and the Unicorn (La Dame à la licorne), which we have discussed, a long time ago, is housed in the Musée national du Moyen Âge, the former Cluny Museum, in Paris. But the following contains relevant information.

A tapestry resembling the Dame à la licorne, The Hunt of the Unicorn (seven panels), made in Liège, is housed in the Cloister (The Metropolitan Museum of Art).

The Apocalypse Tapestry and the Dame à la licorne (six panels) were both made in Europe, Flanders to be precise. Jean Bondol was from Bruges.

Turquerie, a taste for all things reflecting the Ottoman Turks, was not popular in Europe until the 18th century, a late date if one considers that Francis I of France and Suleiman the Magnificent entered into an alliance, the Franco-Ottoman Alliance, in 1536. This entente would last until Napoleon’s campaign in Egypt. (See French Campaign in Egypt and Syria, Wikipedia). Similarly, Chinoiserie, an engouement, a craze, for all things Chinese, did not flourish until the 18th century.

There is an older Orient. Edward Said’s may be patronizing, but Bellini’s portrait of Mehmed II depicts a Conqueror and it suggests immense wealth. See the jewels, the ornate frame and the little crowns. Merchants travelled to the East to purchase its spices, its coffee and its fabrics. There was so much beauty to the East and there was opulence and mystery. It could be that we do not study the Orient sufficiently, but will the Orient ever reveal itself?

The knowledge crusaders took from the East was mostly scientific: algebra, architecture, medical practices, not to mention Arabic numerals…

The Contents of Natural Histories

Nature included not only animals, plants, flowers, but “the moon, stars, and the zodiac, the sun, the planets, the seasons and the calendar[.]” (Vincent de Beauvais). I have already noted that our humble calendars were cultural monuments. Jean de France’s Livre d’heures (Book of Hours) is probably the chief example of humanity’s need to chronicle its hours and the labours of the months. Les Très Riches Heures de Jean de France, Duc de Berry and the Book of Kells are genuine treasures. The beauty of the Book of Kells never ceases to amaze me. It is always new. As for Jean de France, Duc de Berry’s Livre d’heures, it is also an extremely beautiful book and it features the zodiac, thereby attesting to the continuity between “paganism” and Christianity.

The Testimonial of Explorers: Marco Polo

The authors of the Natural Histories relied to a large extent on the testimonial of earlier natural historians, which did not make for accuracy, but was acceptable in the Middle Ages. Predecessors were masters one strove to equal. Marco Polo‘s (15 September 1254 – 8–9 January 1324) Book of the Marvels of the World (Le Livre des merveilles du monde), c. 1300, was also a source for natural historians who lived during Marco Polo’s lifetime and afterwards.

Marco Polo, however, did not have a camera and it would appear that few artists accompanied him. His descriptions could therefore be edited. Discovering trade routes, the silk road, was a more important mission for him than cataloguing animals. Last September (2014), it was suggested that Marco Polo discovered America. (See The Telegraph.)

The Bestseller of the Middle Ages: The Golden Legend

Although Natural Histories listed mythical animals and much lore, I would not dismiss the accounts of the natural historians of Greece, Rome, early Christianity, and the Christian Middle Ages. Their books reveal various steps in our history. For instance, the bestseller of the Middle Ages was Jacobus de Voragine’s (c. 1230 – 13 or 16 July 1298) Golden Legend, which contained mostly inaccurate hagiographies (lives of saints). Although it was rather fanciful, it served as mythology and humans need mythologies. They need to trace their roots.

Among historians, we can name:

My list is the Medieval Bestiary‘s list. It can be found by clicking on Bestiary.ca. The following authors are fascinating: