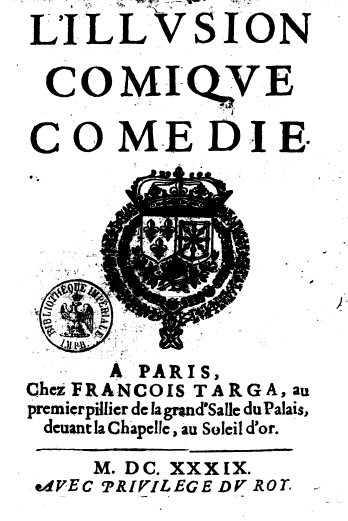 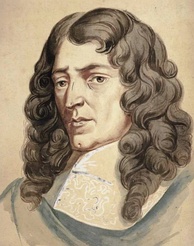 Molière and Pierre Corneille or A Collaboration by Jean-Léon Gérôme (Wikiart.org.)

Getty Images has a fine selection of prints featuring farceurs. Farceurs are comédiens who are featured in burlesque plays. Molière was called the “premier farceur de France.” The farce is a comic genre in which the tables are turned on a person or persons. Molière’s Précieuses ridicules (18 November 1659) is a farce. Farces are short plays, one to three acts, and Molière used prose instead of verses (12-syllable alexandrins). Molière wrote both farces and “grandes comédies.” Grandes comédies are five-act plays and are usually written using alexandrins.

During the years he spent touring the provinces, we assume Molière’s troupe (his company) performed several farces. At any rate, we have no text of plays produced in the provinces, with the possible exception of one farce: La Jalousie du barbouillé. A barbouillé is someone whose face is smeared.

Farce is an old genre, going back to the Atellane Farce/Fable, called Fabulae atelanae in Latin. These farces contain some of the masks of the commedia dell’arte, a product of 16th-century Italy. Italian comedians were given sketches or scenarios and improvised on these canevas. Troupes were poor and had to make do with costumes only, rather than elaborate stagecraft, such as machines. Some farceurs, however, were supported by noblemen during carnivals such as the Carnival of Venice. Carnival season ended with Mardi Gras, the day before Lent began, Ash Wednesday.

The commedia dell’arte features types or masks as characters. Pantalone was always a jealous older man and jealousy is the main ‘sin’ in Molière comedies. It’s a terrible sin because through one’s own behaviour one alienates the person one loves. Molière’s finest play on this subject is L’École des femmes, The School for Wives (26 December 1662). It created a controversy.

The Italians always played the same role.  The blocking character, the character hindering the innamorati‘s marriage, coud be Pantalone, Il Dottore, Il Capitano, etc. Their roles were functions, or masks, in which they followed in the footsteps of the oldest comédiens, Attic (Greek) comedy and ancient rituals. These functions are often called archetypes. (See Northrop Frye, Sources and Resources).

As a child, Molière (1622 – 1673) was influenced by Italian comedy. The Italians performed at the Pont-Neuf (still standing and called the Pont-Neuf [the new bridge]).

Molière, né Jean-Baptiste Poquelin, lived in an affluent area of Paris, rue Saint-Honoré, where Madeleine de Scudéry‘s salon was located. He studied at the Jesuit Collège de Clermont, now the Lycée Louis-le-Grand, and also studied law, but may not have completed his degree.

Molière’s father, Jean Poquelin, had bought a position from Louis XIII in 1631. It should have provided Molière with a good income. In 1641, Jean-Baptiste Poquelin became “valent of the King’s chamber and keeper of carpets and upholstery” (“valet de chambre ordinaire et tapissier du roi”), but in 1643, he founded l’Illustre Théâtre with Madeleine Béjart. The troupe went bankrupt and Molière was jailed, briefly. After his release, he and his comédiens left Paris.

Upon his return to Paris, Molière had a successful but relatively short career, about fifteen years. On 17 February 1673, while playing Argan, the Imaginary Invalid, Molière collapsed. He remained on stage performing his role, but died shortly after the comedy was over. The Imaginary Invalid is a three-act comédie-ballet, set to music by Marc-Antoine Charpentier and choreographed by Pierre Beauchamp.

Farces were common entertainment during the Middle Ages. They were performed to amuse spectators between scenes during long plays, such as Passion plays. Passion plays were reenactments of the Passion of Christ. These lasted for days and farces provided the “comic relief.” Passion plays have survived. The most acclaimed has been performed at Oberammergau (Bavaria), since 1634.

The most famous French medieval farce is La Farce de Maître Pierre Pathelin, The Farce of Master Pierre Pathelin (1457). We do not know the name of its author, but the farce features a legal battle. Maître is the title given lawyers. A lawyer, Maître Pathelin, has purchased fabric on credit from a clothier named Guillaume Joceaulme. Pierre Pathelin is hired to defend a shepherd named Thibaut l’Aignelet (from agneau, sheep) who stands accused of stealing a sheep (un agneau) from the cloth merchant.

In previous centuries, lawyers had not been trained, but they now learned their profession. Consequently, Maître Pierre Pathelin had fewer and fewer customers, so there were holes in his clothes and in wife Guillemette’s clothes. His not having money explains why he has bought fabric on credit. When the cloth merchant comes to his house to be paid, Pathelin make believe he is sick to escape paying.

During the trial, Guillaume Joceaulme, the cloth merchant, recognizes Maître Pathelin.  So the trial takes on new dimensions. Pathelin has instructed his client to say nothing but “Baaa” when he is asked a question, which he does. Pathelin rules against Joceaulme because of the incoherence the case presents. When Maître Pathelin asks to be paid, Thibault l’Aignelet does as he was told. He says “Baaa.” Consequently, Pathelin is “hoisted with his own petard” (trompeur trompé) as in Shakespeare’s Hamlet.

The French farce is therefore rooted in the medieval French farces (entertainment between scenes) and in the irreverent fabliau. But it also borrows from the commedia dell’arte, Latin comedy (Plautus and Terrence), the farces of Antiquity and Greek comedy. Molière had to write down his comedies, beginning with Les Précieuses ridicules (18 November 1659) to avoid theft of his material. But when he was touring in the provinces, members of his troupe would write their part using a canevas, a sketch (see Commedia dell’arte, Wikipedia).

The picture below depicts French as well as Italian “masks.” Molière is at the far left (brown clothes). Jodelet, who performed in the Précieuses ridicules, is standing next to him.

Molière did not write in a void. He was influenced by comedy as a genre and it’s traditions. But they also reflect the institutions, ideologies, esthetics, beliefs and goals of his age: salons, préciosité, l’honnête homme, le galant homme, casuistry, Jansenism.

My book, if there is a book, will show Molière “en son siècle,” but also everyman’s Molière.