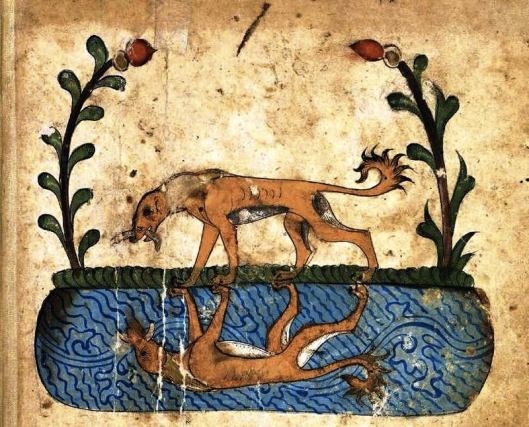 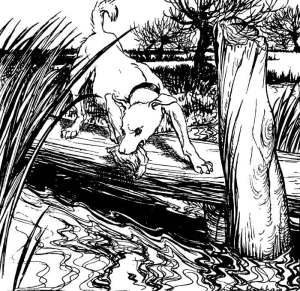 The Dog and Its Reflection,
Arthur Rackham, illustrator (Gutenberg [EB #11339]

“The Dog that dropped the Substance for the Shadow” is an Æsopic fables. It is #133 in the Perry Index where it is entitled “The Dog and Its Image,” or “The Dog and Its Reflection.” We can trace it back to Phædrus and Babrius who committed to paper fables Æsop had told. Phædrus wrote in Latin and Babrius, in Greek. Later fabulists, European or Western, drew their subject matter from these two sources.

There also existed an Eastern tradition of the same fables. According to the foreword, or avertissement, of a seventeenth-century French translation of Les Fables de Pilpay, Æsop, if there ever was an Æsop, seems to have lived in Greece, but was from the Levant.

“[T]he Greeks followed the Orientals; I say ‘follow,’ because the Greek themselves confess that they acquired this sort of knowledge [cette sorte d’érudition] from Æsop, who was from the Levant (Levantin). (See Les Fables de Pilpay philosophe indien, ou la conduite des roys, the Avertissement, p. 10 approximately). It is an online Google book. Pilpay is the story-teller in Vishnu Sharma‘s Sanskrit Panchatantra. 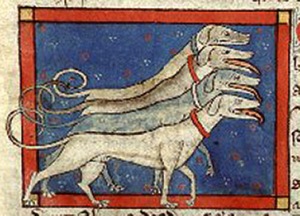 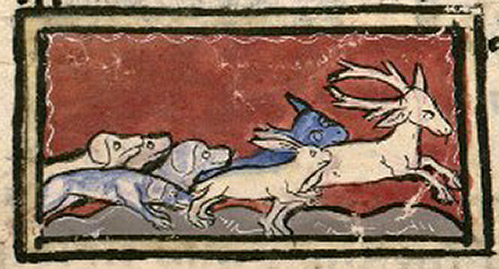 In all likelihood, Vernon Jones used Phædrus (Latin) or Babrius (Greek) as his source. He may also have used another re-teller’s translation of Phædrus and Babrius, the Western tradition.

However, Æsop also told fables belonging to a parallel Oriental tradition. “The Dog that dropped the Substance for the Shadow” was retold in Arabic by Persian Muslim scholar Ibn al-Muqaffa’. His translation is entitled Kalīlah wa Dimna and dates back to 750 CE. Ibn al-Muqaffa’ used Borzōē‘s or Borzūya‘s Pahlavi‘s translation of the Sanskrit Panchatantra, 3rd century BCE, by Vishnu Sharma. (See Panchatantra – Wikipedia, the free encyclopedia.) The Panchatantra is an online publication. (See Internet Archives.)

The Oral vs the Learned Tradition: literacy

It is therefore possible, perhaps probable, that Æsop, a story-teller whose fables were transmitted to Western Europe, used fables originating in an Eastern and “learned” tradition. The Eastern tradition may have been a “learned” tradition, i.e. written down fables, but the fables, animal fables, were told to people who may not have been able to read or write. Literacy is a key factor in the transmission of fables or tales. It would be my opinion that La Fontaine’s source, Névelet or Neveleti, used Phædrus or Phædrus
retold by other fabulists who may have borrowed elements from Babrius.

In other words, Æsop’s fables were probably transmitted to Western fabulists by Phædus and Babrius, but there is an eastern tradition, a parallel. When La Fontaine wrote his second collection (recueil) of fables, published in 1678, he had read G. Gaulmin’s Livre des lumières ou la conduite des roys (1644) (The Book of Lights or the Conduct of Kings). This book contains Pilpay’s fables. (See Panchatantra, Wikipedia.)

“A New Persian version from the 12th century became known as Kalīleh o Demneh  and this was the basis of Kashefi’s 15th century Anvār-e Soheylī (Persian: The Lights of Canopus). The book in different form is also known as The Fables of Bidpaï (or Pilpai, in various European languages) or The Morall Philosophie of Doni (English, 1570).” (See Panchatantra, Wikipedia)

Our fable is number 17 in La Fontaine’s sixth book of fables, published in 1668 (VI.17). It was written before La Fontaine read Le Livre des lumières, 1644, the fables of Bidpaï.

The Panchatantra inspired a separate Hitopadesha, fables used to prepare a prince for his royal duties. As its title indicates, directions on the conduct of kings are included in the online Les Fables de Pilpay philosophe indien, ou la conduite des roys.

The Dog that dropped the Substance for the Shadow

This world is full of shadow-chasers,
Most easily deceived.
Should I enumerate these racers,
I should not be believed.
I send them all to Aesop’s dog,
Which, crossing water on a log,
Espied the meat he bore, below;
To seize its image, let it go;
Plunged in; to reach the shore was glad,
With neither what he hoped, nor what he’d had.

Æsop’s “The Dog and the Shadow”

A Dog was crossing a plank bridge over a stream with a piece of meat in his mouth, when he happened to see his own reflection in the water. He thought it was another dog with a piece of meat twice as big; so he let go his own, and flew at the other dog to get the larger piece. But, of course, all that happened was that he got neither; for one was only a shadow, and the other was carried away by the current. [EB #11339] 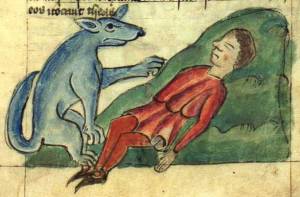 “The Dog and its Reflection” was incorporated in the 12th-century Aberdeen Bestiary, an illuminated manuscript. (See The Medieval Bestiary, scroll down to Æsop’s Fables.)

In Britain, John Lydgate told this story in his Isopes Fabules. His moral was that “Who all coveteth, oft he loseth all.” The fable is also part of Geoffrey Whitney‘s (c. 1548 – c. 1601) Choice of Emblemes.[ii] Whitney’s moral is “to make use of moderate possessions,”
Mediocribus utere partis. This story was told by several fabulists in many countries. (See The Dog and Its Reflection, Wikipedia.)

In La Fontaine’s “Le Chien qui lâche sa proie pour l’ombre,” the moral precedes the example (it usually follows the fable) and seems to differ from the moral provided by other fabulists. La Fontaine warns that one should not be deceived by appearances, a common moral in seventeenth-century France. However, La Fontaine ends his fable by writing that the dog reached the shore “[w]ith neither what he hoped, nor what he’d had.”

We tell the same stories, east and west, but terrorists in the Levant are killing innocent American journalists. I still hope for a diplomatic resolution to the current conflict. Further bloodshed is not necessary. President Obama is a man of peace, so I am confident that he will do what has to be done.

The oak tree is felled by a terrible wind, but the reed bends and survives.

However, that man who beheaded James Foley and Steven Sotloff in cold blood is a criminal. 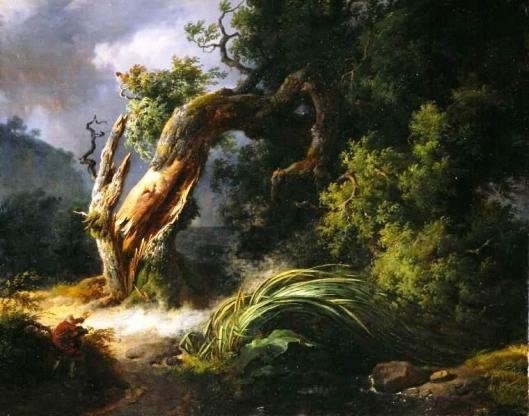 Fables, as you know, date back to Antiquity. Let us mention, first, Vishnu Sharma‘s Sanskrit Panchatantra (Pañcatantra [Five Principles]), 3rd century BCE or much earlier times: 1200 BCE. Its Arabic version, entitled Kalīla wa Dimnah (750 CE), was written by Persian scholar Ibn al-Muqaffa.  For most most of us, however, fables are Æsop’s Fables (c. 620-564 BCE) and they belong to an oral tradition. Æsop, if there ever lived an Æsop, was probably a freed slave from Samos, Greece.

Fables are usually looked upon as children’s literature because most feature animal protagonists. Some fables may be intended for children, but others encompass the wordly-wisdom a prince should acquire. Moreover, fables may feature plants or human beings speaking with animals. The latter are called libystic fables.

When reading “Le Chêne et le Roseau,” one may be reminded of Virgil’s Georgics (1st century BCE), but this fable is mostly a La Fontaine fable.  As mentioned above, it was published in 1668 and is the last fable (number XXII) of La Fontaine’s first book of Fables.  La Fontaine published a second book of Fables in 1678-1679, and a third book, in 1694 or somewhat earlier.

In “Le Chêne et le Roseau,” the Oak tree boasts to the Reed that he is strong and could protect the humble Reed from powerful winds.  The Reed’s response is that “he bends” in the wind, “and does not break:” “Je plie, et ne romps pas.” As the two, the Oak tree and the Reed, are conversing, a devastating wind fells the Oak tree.  As for the Reed, he is whipped back and forth by this ferocious wind, but survives.

Fables are lessons presented in Horatian (Horace, 1st century BCE) fashion:  “Prodesse et delectareˮ (To Delight and to Instruct, or plaire et instruire). So a lesson or lessons can be drawn from “The Oak and the Reed,” (La Fontaine [I.22]) lessons for the prince.

Usually, my students would respond that the oak tree is punished for boasting, which is a correct answer.  Destiny being fickle and life, fragile, one should not boast.

I would then remind them of the Roseau ’s statement:  “Je plie, et ne romps pas.ˮ  Not all of them could grasp readily that La Fontaine’s fable contained another lesson, one that could be useful for the prince or the man at court.

The lesson is simple.  If one is flexible, chances are one might survive and even blossom in the ruthless halls of the power.[i]

Could it be that nothing has changed, that one must still accept compromises or otherwise be totally ineffective in any office to which he or she is elected.

Ideally, the prince acts according to a set of principles.  He knows, for instance, that he must serve his people, so he listens.  He also knows how to serve his people.  But, rigidity is an extreme that precludes listening and militates against both reasoned and reasonable leadership.