I have used this song in an earlier post on Jean Racine and his Phèdre (1677) entitled Jean Racine, Gabriel Fauré & Alexandre Cabanel: a Canticle. Phèdre is a dramatic tragedy, in five acts, written in alexandrine verse (twelve syllables). It was first performed on 1 January 1677 (see Phèdre, Wikipedia). Racine’s Cantique is not part of Phèdre, perhaps the best known of Racine’s tragedies and, officially, his last play.

Racine’s Phèdre is about love and jealousy. In certain seventeenth-century works of literature, jealousy is the feeling that reveals one is “in love.” Love is therefore looked upon as dangerous, because jealousy can be an extremely painful feeling. The foremost literary expression of this phenomenon is Madame de la Fayette‘s novel entitled La Princesse de Clèves, published anonymously in 1678. It is considered a masterpiece of Western literature.

This post is not about Phèdre, except indirectly. I am using images related to Racine’s Phèdre, whose plays, tragedies, are rooted in Greco-Latin models or mythology. However, Racine’s tragedies usually convey a meaning not entirely intended in the Greco-Roman “model.” Moreover, Racine’s plays are examples of works of literature that were considered as well written as their source. The literary maturity of seventeenth-century French literature triggered the famous Quarrel of the Ancients and the Moderns. As we neared the end of the seventeenth century, many claimed that the modern work of literature was at least as fine as the Greco-Latin “model,” which was often the case.

Jean Racine is one of the most prominent dramatists in French literature. He lived during the seventeenth century, the age of Pierre Corneille (6 June 1606 – 1 October 1684), best known for Le Cid (1637) and Molière (Jean-Baptiste Poquelin), one of the “greatest masters of comedy in Western literature,” (baptized 15 January 1622 – d.17 February 1673). (See Molière, Wikipedia.)

Jean Racine‘s Cantique is a translation and a paraphrase (a rewording) of an earlier text. Set to Gabriel Fauré‘s music, it nearly becomes what the romantics, nineteenth-century authors, artists, musicians and critics, would call the “sublime.” Gabriel Fauré (12 May 1845 – 4 November 1924) set Racine’s Cantique to music when he was nineteen-years old.

A canticle is a song of praise taken from biblical texts other than the Psalms (Wikipedia). Magnificats, hymns of praise, are canticles. Racine’s text is a translation and a paraphrase of Consors paterni luminis. It is part of Racine’s Hymnes traduites du Bréviaire romain (Hymns Translated from the Roman Breviary), published in 1688.

I have recycled images used in my posts on Racine’s Phèdre. Phèdre’s husband slew the Minotaur, the offspring of Pasiphaë, Minos’ wife, and a bull. The Minotaur’s father may be the Sacred Bull. The Bible’s Golden Calf is an example of the worship of bulls, calfs and cows. Pictured below is the Bull of Knossos, or the Cretan Bull. The Minotaur‘s mother is Pasiphaë, Phèdre’s and Ariadne’s mother. The Minotaur was slain by Theseus, Phèdre’s husband, who used Ariadne thread to find his way to the Minotaur through the labyrinth built by Daedalus, who crafted sadly-remembered wings for his son Icarus.

However, let us focus on Gabriel Fauré’s (op. 11) musical setting of the canticle translated by Racine. Bulls will be discussed elsewhere. They were worshipped in Egypt, so it’s a long story.

By and large, we no longer worship bulls and bull-leaping is antiquated, but we do have bullies a-plenty.

Best regards to all of you: my family!

Word of God, one with the Most High,
in Whom alone we have our hope,
Eternal Day of heaven and earth,
We break the silence of the peaceful night;
Saviour Divine, cast your eyes upon us!

Pour on us the fire of your powerful grace,
That all hell may flee at the sound of your voice;
Banish the slumber of a weary soul,
That brings forgetfulness of your laws!

O Christ, look with favour upon your faithful people
Now gathered here to praise you;
Receive their hymns offered to your immortal glory;
May they go forth filled with your gifts.

For translations of the “Cantique” in languages other than English, please click on translations. You will find the original Latin text in Wikipedia’s entry on Cantique de Jean Racine (Fauré). 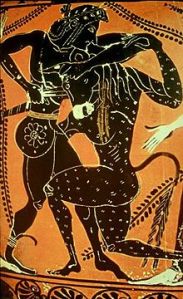