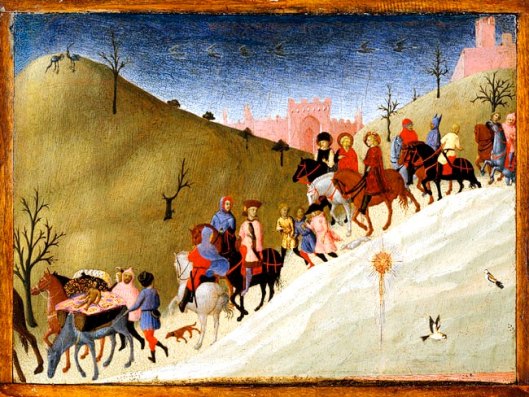 The Journey of the Magi by Stefano di Giovanni Sassetta, 1435 (Courtesy The Metropolitan Museum of Art, NY)

A list of articles based on the Nativity was posted on 16 December 2015. It can be found at the foot of the current post. This year’s Nativity post is based on Twelfth Night & Carnival Season (8 January 2014), and the story of Epiphany, celebrated on January 6th. We are closing the “twelve days of Christmas.”

The Twelve Days of Christmas

The “Twelve Days of Christmas” is a song published in England in 1780 in a book of children’s songs entitled Mirth without Mischief. The song has a longer title: “The Twelve Days of Christmas Sung at King Pepin’s Ball.” There was a King Pépin, Pépin the Short, Pépin le Bref or, literally, Pepin the Brief, the first Carolingian to be king. And the song may be French in origin:

Cecil Sharp observed that from the constancy in English, French, and Languedoc versions of the ‘merry little partridge,’ I suspect that ‘pear-tree’ is really perdrix (Old French pertriz) carried into England”; and “juniper tree” in some English versions may have been “joli perdrix,” [pretty partridge]. Sharp also suggests the adjective “French” in “three French hens”, probably simply means “foreign”. (See The Twelve Days of Christmas, Wikipedia.)

It is a cumulative song, in folklore and Stith Thomson calls it a “chain song” in his Motif-Index of Folk-Literature (1955-1958). It is Roud Folk Song Index number of 68. 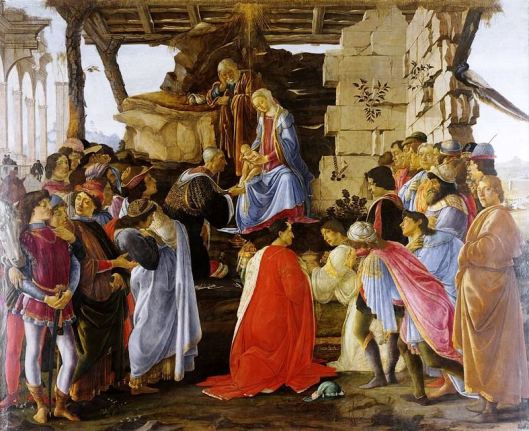 Adoration of the Magi by Sandro Botticelli, 1475 (Photo credit: Wikipedia)

Associated with the Epiphany, the twelfth day of Christmas, or January 6th, is “We Three Kings.” The three kings are Melchior, Caspar and Balthazar. Spellings vary.

“[A]ccording to Western church tradition, Balthasar is often represented as a king of Arabia, Melchior as a king of Persia, and Gaspar as a king of India.” (Encyclopædia Britannica.) They brought gifts to Jesus. (See Biblical Magi, Wikipedia.)

The Western church does not celebrate Christmas on the same days as the Eastern church, the Orthodox church. In Russia, Christmas is celebrated on January 7th. The difference is due to the Orthodox church’s use of the Julian (45 BCE) rather than Gregorian calendar (1582 CE) to situate Christmas. Gregory VIII‘s (7 January 1502 – 10 April 1585) calendar introduced the leap year. In Russia, festivities begin on December 31st and end on January 10th. The Orthodox church has fewer days of Christmas. (see Christmas in Russia, Wikipedia ), but Advent begins on 28 November and lasts until December 31st. (See whychristmas.com.)

In the Western church, Christmas is celebrated on or near the Winter Solstice which, this year, was December 22nd. Protestant churches celebrate Christmas on the same day as Roman Catholics. But both the Western Christmas (Catholic and Protestant) and Eastern Christmas are celebrated at the same time as a former ‘pagan’ feasts. Therefore, the seasons have remained the marker. The Christianization of Kievan Rus’  dates to the year 988 CE, when Vladimir the Great was baptized in Chersonesus and then went on to baptise members of his family and the people of Kiev (Ukraine). (See Christmas in Russia, Wikipedia.)

In Russia, a story is associated with the Kings of Orient (the Wise men), that of Babushka, who gives the kings a room to rest. They leave without her noticing. She goes to Bethlehem, but the kings have left. The origin of this story may be American. (See whychristmas.com.)

With kind regards to every one. ♥

The posts listed below tell the story of our Seasons, Feasts, Festivals and feature Christian Hymnology. Our first feast is Christmas (“The Four Seasons…”), the origin of comedy, and posts related to the birth of Christ.

This post will become a page, or a category, entitled “Feasts and Hymnology.” 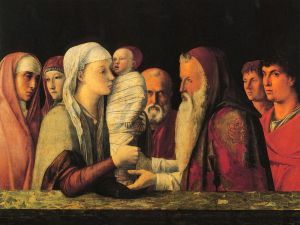 Presentation of Christ at the Temple by Giovanni Bellini (Photo credit: Wikipedia)

Naked Young Woman in Front of the Mirror, Bellini’s first female nude, painted when he was about 85 years old, circa 1515)
(Giovanni Bellini, Wikipedia)

Aert de Gelder (or Arent, 26 October 1645 – 27 August 1727) is one of Rembrandt’s last pupils while in Amsterdam (1661 to 1663) (Wikipedia)I discovered I had to know Christian liturgy, first, when taking courses in the Fine Arts and, second, as a student of musicology. Students of musicology simply have to learn liturgy and the Nunc dimittis is a good example. There was a demand for liturgical music. As a result, the development of polyphony, the combination of voices, occurred from liturgical chant to liturgical chant and from madrigal to madrigal, its secular counterpart. Liturgy also constitutes one of the main subject matters of the visual arts.

In my family Candlemas was celebrated, but I was not told that the Nunc dimittis was Simeon’s Song of Praise, a canticle. In fact, although I attended a Catholic school, we were never told that Candlemas was a commemoration of the Presentation of Jesus at the Temple and of Mary’s Purification after Childbirth.

Here are the words of the “Nunc Dimittis:”