Montreal city council is lending its support to Raif Badawi, as well as his wife and three children who are currently living in Quebec. (Ryan Remiorz/The Canadian Press) (Caption and photo credit: Canadian Broadcasting Corporation)

It was not my intention to post a revised version of my article on Relativity and the Rule of Law, but it happened. This post, on Raif Badawi, also published itself automatically.

A unanimous vote
A message sent to Ottawa

According to the Canadian Broadcasting Corporation, the municipal council of the city of Montreal voted unanimously to ask that Raif Badawi be released and join his wife and children in Quebec. Denis Coderre, the mayor of Montreal and a former Minister of Immigration at the Federal level, Ottawa, is asking that the Canadian Government provide Raif Badawi with a special permit granting him the status of landed immigrant. Mr Badawi would be given a Canadian passport. 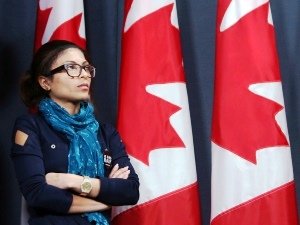 Badawi’s wife Ensaf Haidar lives in Quebec with their three children. She has been actively petitioning the government to step in on behalf of her husband and seek his release from a Saudi jail. (Fred Chartrand/CP) (Caption and photo credit: Canadian Broadcasting Corporation)

Mr Badawi has now been detained for three years and was flogged on 9 January 2015. He would be released on Humanitarian and Compassionate grounds. He has a wife and three children in Canada and should be allowed to join them.

Ensaf Haidar, Mr Badawi’s wife, has appeared on television programmes Canadians do not miss: Tout le monde en parle (Everyone is talking about it) and As it happens.

Mr Badawi’s case is being reviewed by the Saudi Supreme Court. Canada has a friendly relationship with the Saudi government. Whether or not this factor will help Mr Badawi is impossible to predict.

Ensaf Haidar is a very determined and brave wife.