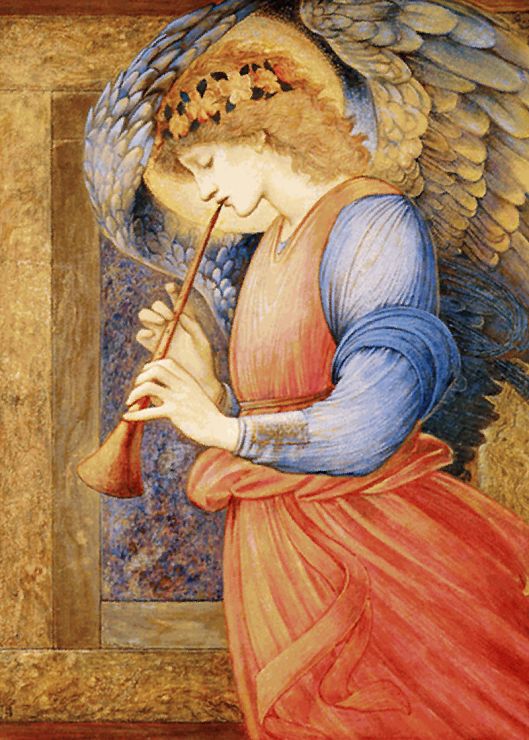 Let me pause so I can wish all of you a Merry Christmas.

You have been very dear to me for several years. In fact, you have been at times a life-line and, because of you, I have researched many topics. I knew these existed, but I took a closer look.

Your posts are informative, lovely, and always a pleasure to read or view.

An Angel playing a Flageolet

Sir Edward Burne-Jones was William Morris‘ friend from the moment they met at Oxford until Morris’ death in 1896. They shared a passion: beauty, the Middle Ages in particular. Burne-Jones is a little somber.

They, Walter Crane, and other members of the Arts and Crafts Movement domesticated beauty and beauty can be domesticated. The apartment I live in has been a disappointment. It has inadequate soundproofing, etc. But what a fine space. It was beautifully designed and a joy to decorate.

A Contract with Saudi Arabia

I will close by asking you to pray for Raif Badawi. Saudi Arabia is showing no compassion. Flogging Raif Badawi will resume, but he will be flogged indoors. He asked for more tolerance and is therefore innocent. Being flogged will kill him.

Canada’s new Prime Minister, Justin Trudeau, has decided not to intervene on Raif’s behalf because, under the previous government, Canada signed a lucrative contract with the Saudis: 15 billion dollars for supplying light armoured vehicles.

Therefore, on the one hand Canada is welcoming refugees, but on the other hand, it is providing weapons to a country that has long been violating International Law. Shame on us!

I hope these vehicles will be not be given to Isis. Saudi Arabia’s position with respect to Isis is difficult to assess.

Disarmed and hungry, Isis cannot survive. All its lines of supply should be cut off, including food if necessary. Otherwise, one strike will lead to another and the conflict will not end.

Planes filled with refugees are arriving in Canada, but the government will fall short of its goal of transporting 10,000 refugees before 2016. Quebec was to greet 3,650. Will it?

Altogether, Canada will take in 25,000 refugees and 15,000 civil servants are working to make sure the normal procedure is followed. Refugees must be identified before they board the planes that will fly them to Canada. They cannot otherwise be supplied with a Social Insurance Number (SIN or NAS) and a Health Insurance Card as soon as they arrive. The Syrian Civil War has created a bureaucratic nightmare for host countries. Canada must nevertheless give Syrians a home.

It will be a humble Christmas, but it will be Christmas. We are now past the Winter Solstice. It occurred on 22 December. Nights will be shorter and shorter.