Why have musicologists not come to a consensus on the subject of madrigals, or is it that there are too many types of madrigals?

The Trecento: the Squarcialupi Codex

So here we go.  According to the Encyclopedia Britannica, madrigals are a form of “vocal chamber music.”[i]  I rather like this definition as it suggests a degree of  intimacy.  Madrigals (from the Latin matricale) were songs in the mother tongue, and the mother tongue was Italian.  In its earliest form, the madrigal consisted of two or three stanzas set to the same melody and a refrain or coda, set to another melody. 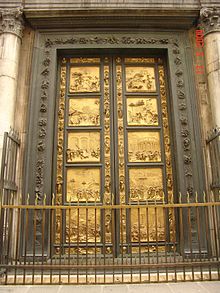 Gates to Paradise, Florence, by Ghiberti

The birthplace of the Italian madrigal would be Florence.  Landini was a Florentine composer and he knew Petrarch, which is not insignificant.  Indeed, the emergence of poetry in the Italian language motivated composers to use the madrigal to set poetry to music.  Cardinal Pietro Bembo (1470 – 1547) championed this particularly cause, called the Petrarchan movement.

But matters started to change when Franco-Flemish composer Adriaan Willaert brought the polyphonic motet (from ‘mot’ [word] and earlier ‘motetus’) to Italy and founded the Venetian School of music.  In the vastly-extended Burgundian lands, suddenly the cultural hub of western Europe, there had already been a generation of musicians composing in a contrapuntal manner, i.e. combining voices.  The better-known among these composers are Guillaume Dufay, Gilles Binchois and Johannes Ockeghem.

Given the presence of superior musicians in Flanders, Venetians hired the Franco-Flemish composer Adriaan Willaert (c. 1490 – 1562) who founded the Venetian School of Music.  The arrival, in Venice, of polyphonic music had repercussions on the madrigal.  The madrigal became increasingly polyphonic and was transformed into a through-composed (durchkomponiert) song.  As well, the Madrigal now consisted of one stanza to which a refrain or coda was added.

The most famous composer of madrigals trained by Andriaan Willaert is probably Cipriano de Rore.  Composers associated with the Venetian School are:

The late fifteenth century:  the frottola and the Carnival Song

But composers of madrigals also drew from a simpler and perhaps nearer source: the frottola (plural frottole).  Both polyphony and the frottola left their imprint the early fifteenth-century (the 1400s) Renaissance Italian madrigal.  The frottola is “a four-part strophic song set syllabically and homophonically, [ii] with the melody in the upper voice, marked rhythmic patterns, and simple diatonic[iii] harmonies.”

Transparency in text-setting: Josquin des Prez; the Council of Trent

Isaac knew Josquin des Prez (1440 – 27 August 1521) whose skills at text-setting are legendary.  Moreover, the Council of Trent (13 December 1545 – 4 December 1563), which convened in the wake of increasing fragmentation in the western Church, dictated greater transparency in liturgical music.  One had to hear the  words. As a result, text-setting gained transparency.  The directives of the Council of Trent affected madrigal composers, but to a small rather than large extent.  The music of Palestrina epitomizes this clarity.

Fifhteenth-century composers of madrigals are:

With respect to transparency, Luca Marenzio’s madrigals displayed the appropriate balance between music and text.  But sixteenth-century composers of madrigals equated transparency in text-setting not only with the importance to the text, but also with ornamentation.  Singers had to sing long melismas, decorating syllables and words.  Expressiveness was deemed of primary importance.

But no one wrote more expressively and in a more polyphonic manner than Don Carlo Gesualdo.  Gesualdo wrote a large number of madrigals, some of which were settings of Torquato Tasso‘s poems.  Gesualdo’s sixth and last book of madrigals contained madrigals that combined up to six and seven voices.

The term madrigalism, abundant to excessive expressivity and ornamentation, is best attributed to Gesualdo. Madrigalism also characterized madrigals composed by other composer, but it reached excesses in Gesualdo.

As for polyphony, we cannot associate Carlo Gesualdo with the Venetian School, at least not officially.  However, after the murders, which were committed in what is now southern Italy, Gesualdo spent several years in Ferrara, in what is now northern Italy. He may therefore have been exposed to the polyphonic madrigal.  According to the Encyclopædia Britannica, Gesualdo destroyed the Italian-language madrigal:

Later in the century, composers like Don Carlo Gesualdo, prince of Venosa, subjugated the music entirely to the text, leading to excess that eventually exhausted the genre.[v]

In the sixteenth century, madrigal composers were

The madrigal had not died.  It had simply migrated to a most fertile soil.

As we know, although John Dowland played Lute songs, one of his teachers had been Luca Marenzio.  In all likelihood, he was influenced to a certain extent by Luca Marenzio.  At any rate, the madrigal was taken to England by Luca Marenzio and Francesco Bossinensis.   Moreover, in 1588, Nicholas Yonge (c. 1560 – buried 23 October 1619) published Musica Transalpina, Italian madrigals in translation.  His collection was immensely successful.

However, I must pause here as this blog will be too long.  Moreover, the English madrigal deserves a blog of its own.