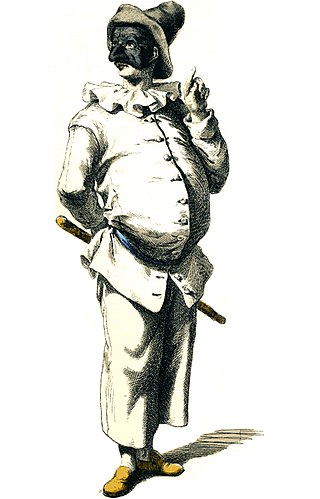 Maurice Sand is the son of famous French writer George Sand. She was a prolific writer and a woman of extraordinary vitality. She and composer Frédéric Chopin were very close friends, lovers I believe.

I looked at my post this morning, but suddenly it disappeared. I had a copy of my article and reinserted it. However, it was missing a few sentences and I had not printed the images. Besides, I had no captions and older versions of the post surfaced.

The post has been rebuilt. I can’t understand what happened.

Pulcinella (Polichinelle) was a scapegoat among stock characters of the commedia dell’arte. 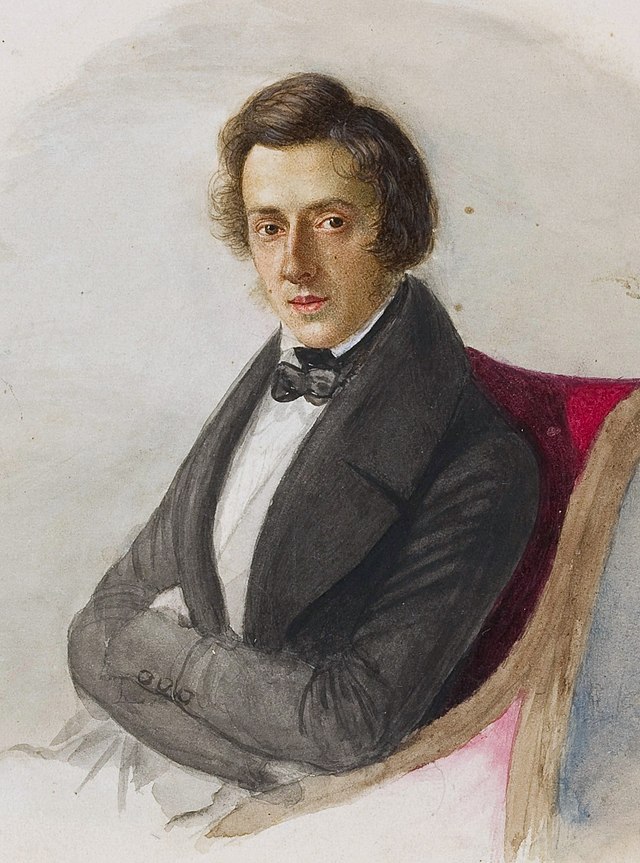 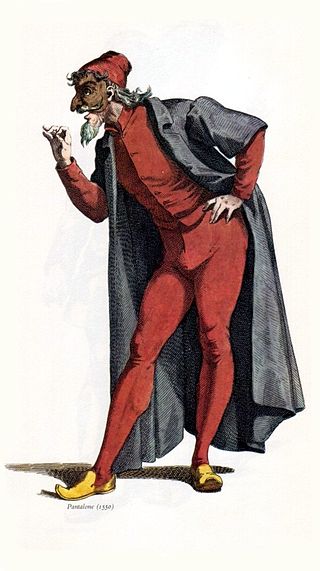 Below is an excerpt from an article I posted in 2014, when our topic was the commedia dell’arte. Pantalone is a mask, a stock character. His name may differ from play to play, but his function, or role, does not change. He is the blocking character, or the obstacle to the marriage of comedy’s young lovers, the innamorati of the commedia dell’arte and, in the case of Pantalone, money prevents the marriages that comedy favours. He is an ancestor to Molière’s Harpagon, L’Avare‘s protagonist.

The portrait I am featuring above is by Maurice Sand, whose full name is Jean-François-Maurice-Arnauld, Baron Dudevant (1823–1889). He was the son of writer George Sand  (1 July 1804 – 8 June 1876), who separated from her husband, but brought up her son Maurice and daughter Solange (1828–1899). She may be the most colourful woman in 19th-century France and a prolific author. We will discuss George Sand in a future post.

Maurice Sand’s depiction of Pantalone is delightful. One of Maurice’s subject matters was la commedia dell’arte. You may remember that one of Molière‘s artists was Edmond Geffroy (29 July 1804-8 February 1895) FR. Maurice Sand’s Masques et bouffons de la comédie italienne, texte et dessins was published in 1860. Maurice was also a writer. He was a self-effacing gentleman, but kept company with the most famous writers and artists of his days.

Molière and the Commedia dell’arte

Molière (15 January 1622 – 17 February 1673) was influenced by the comédie italienne and, in particular, by the commedia dell’arte. He once shared a theatre with the Italians. Moreover, Molière’s first troupe,  L’Illustre Théâtre, went bankrupt in 1645, the year it was founded. Molière spent 24 hours in jail and then left Paris and toured the provinces until 1658. We do not have the text of the many comedies he performed during the 13 years he lived outside Paris, but he may have posted a canevas, the plot, and members of his troupe improvised their role as did the actors of the commedia dell’arte.

Pantalone is a heavy father or an alazôn, the blocking character of comedy, or the person who opposes the young lovers’ marriage. As for Pantalone, he is a ‘needy’ blocking character or Pantalon de’ Bisognosi, Italian for ‘Pantalone of the Needy.’ His name derives from San Pantaleone, or Saint Pantaleon. (See Pantalone and Saint Pantaleon, Wikipedia.) As an alazôn, Pantalone is the opponent of the victorious eirôn (as in the word ironic), who helps bring about the marriage of the young lovers. The role, or function, of the alazôn may be played by several characters such as a braggart soldier, a miles gloriosus, or a pedant, il dottore. Roman playwright Plautus (c. 254–184 BCE) wrote the Aulularia, featuring the miser Euclio.

Pantalone is an ancestor to Molière’s L’Avare (The Miser). L’Avare‘s other ancestor is Euclio, the miser featured in Aulularia, the pot of gold, a play by Roman dramatist Plautus. Molière’s Miser was first performed on 9 September 1668, in the theatre of the Palais-Royal, le théâtre du Palais-Royal. Harpagon is a descendant of Plautus’ Euclio (see L’Avare, Wikipedia).

My article on Molière’s L’Avare (The Miser) is ready for posting, but it is too long. This post will help me make it shorter. L’Avare originates in Greek Old Comedy and Greek New Comedy (Menander c. 342/41 – c. 290 BCE). He may be a type in the Latin Fabula palliata and Atellan Farce, but Molière’s best known-sources are Plautus‘ Aulularia and the commedia dell’arte. Money, or lack thereof, is a common obstacle to the marriage of comedy’s young lovers. As we will see in a future post, Molière’s L’Avare features two young couples and two father figures.

You may notice that a large number of individuals can be associated with Plautus’ Miles gloriosus and the commedia dell’arte‘s Pantalone, il Dottore and il Capitano. Comedies, farces in particular, often feature a boastful character. But Molière’s L’Avare is the depiction of a miser, a less prominent figure than boastful characters.

At any rate, here is a quotation from a post entitled Pantalone: la Commedia dell’arte (20 June 2014).

Pantalone is dressed as Pantalone and his costume is part of his mask. It is always the same and he looks like a hunchback. However, he is not Victor Hugo‘s Hunchback of Notre-Dame (1831). He is a hunchback because of the bag of money he conceals. Pantalone is lustful, jealous, deceitful, selfish, lazy, full of himself (“Il Magnifico”), but, above all, greedy.

Pantalone is the metaphorical representation of money in the commedia world. (See Pantalone, Wikipedia.)

Other than his hunch, Pantalone wears a red cap, red tights, yellow Turkish slippers, a short vest and a long coat. (continue reading) 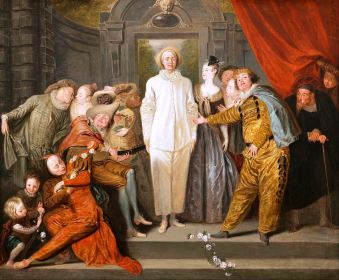