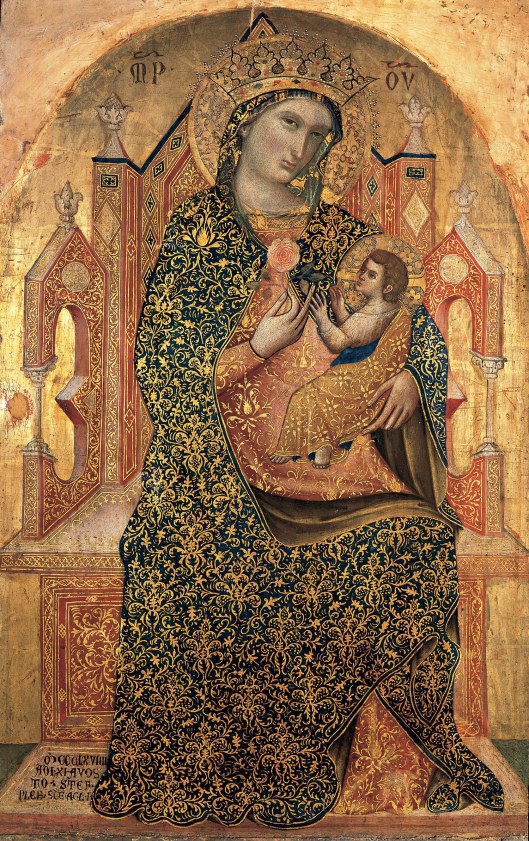 Madonna and Child by Stefano Veneziano

In 2007, the Metropolitan Museum of Art in New York exhibited works displaying

“the exchange of art objects and interchange of artistic ideas between the great Italian maritime city and her Islamic neighbors in the eastern Mediterranean.” (MMA)

Venice had been a republic until it was conquered by Napoleon in 1797. It the year 828 CE ,

“two Venetian merchants stole St Mark‘s hallowed body from Muslim-controlled Alexandria and brought it to their native city, and 1797, when the city fell  to the French conqueror Napoleon[.]” (MMA)

We could give our story two starting-points. In the last decades of the 13th century, Venetian Marco Polo (1254 – 8/9 January 1324) travelled the silk road/route and reached China where he met Kublai Khan, the Mongol conqueror who would be Emperor of China. After the conquest of the Byzantine Empire, on 29 May 1453, by the Ottoman Turks, the silk road was longer used. It had deteriorated during the fragmentation of the Mongol Empire. The last merchants to use it may have died of the plague, the Black Death (1436 – 1453). In order to purchase silk, spices, coffee and other precious goods, merchants would henceforth use a sea route. Portuguese explorer Vasco da Gama (c. 1460s – 24 December 1524), sailed to India following the west coast of Africa to the point, the Cape of Good Hope, where the Atlantic connects with the current Indian Ocean. A sea route had been traced.

Our topic, however, is Venice in the days when it traded with a not-too-distant Orient. So our second starting-point is Gentile Bellini‘s 1479 visit to Istanbul, where he made the portrait of Mehmed II, the Conqueror. Mehmed II was an Ottoman Turk and a Muslim. The people of the Byzantine empire had been Christians who spoke koine Greek. We barely remember there was an Anatolia, which, to a large extent, became modern-day Turkey. After Word War I, Constantinople was occupied. The Ottoman Empire had fallen, but Turkey declared its War of Independence (1919 – 1923) and won. The Ottoman Empire had fallen, but Turkey rose. (See Turkish War of Independence, Wikipedia.)

In 1453, Greek scholars fled to Italy (Venice to begin with), carrying books and they inaugurated the Renaissance, but the defeat of the Byzantine Empire was the fall the Holy See of Orthodox Christianity. It had been the eastern Rome. The fall of Constantinople was, therefore, mostly catastrophic. During the first millennium, the Byzantine Empire had been Arabised and during the second millennium, it would be turkified. Both Arabs and Ottoman Turks were Muslims. Mehmed II conquered the Christian Byzantine Empire in Anatolia and went on to conquer several Christian countries now located in Eastern Europe. Repercussions would be felt for centuries to come.

Venice “mirrored” the East, but the East would also “mirror” the West. In fact, the art the Byzantine Empire resembles Islamic art. Venice lacks minarets and an obélisque, but barely so. It is all lace or arabesques, arched windows and entrances, bas-reliefs, decorative tiles and domes. Venice begins in Alexandria, Egypt.

“Venice is also often referred to as ‘the mirror of the East’ because her architecture and urban plan incorporate typical Islamic features and ornamental flourishes.” (MMA) 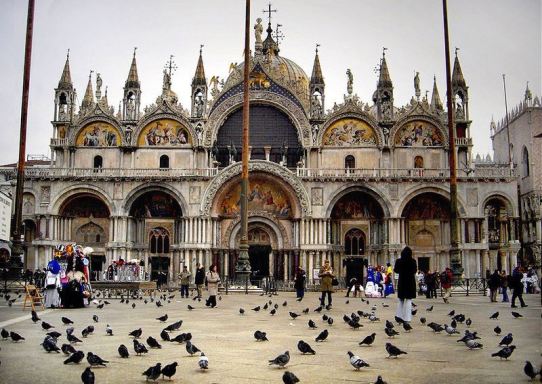 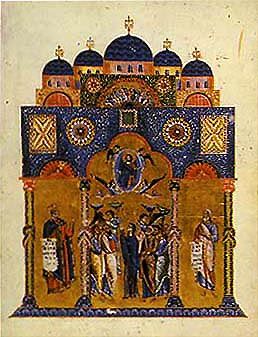 Works Exhibited at the MET 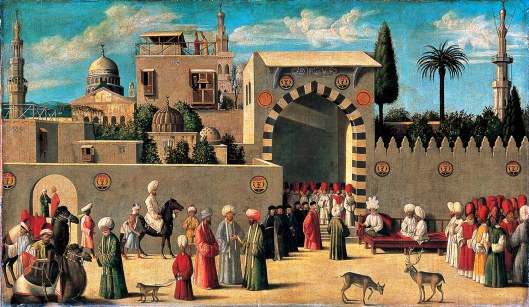 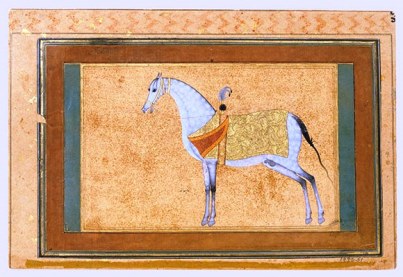 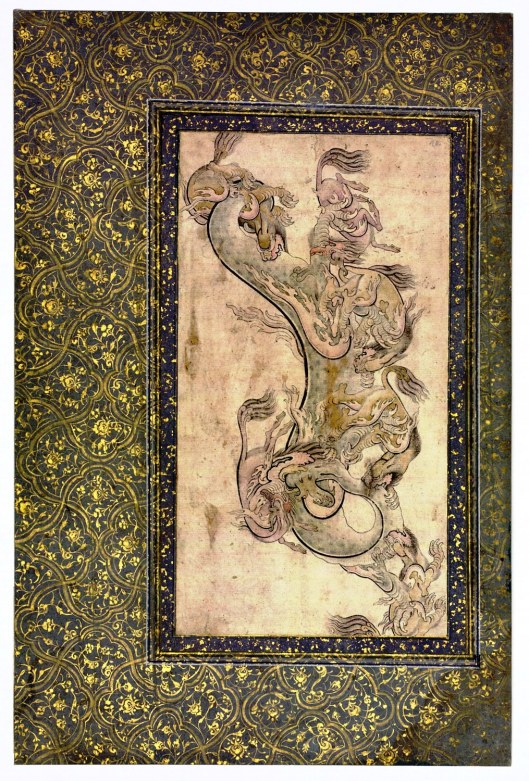 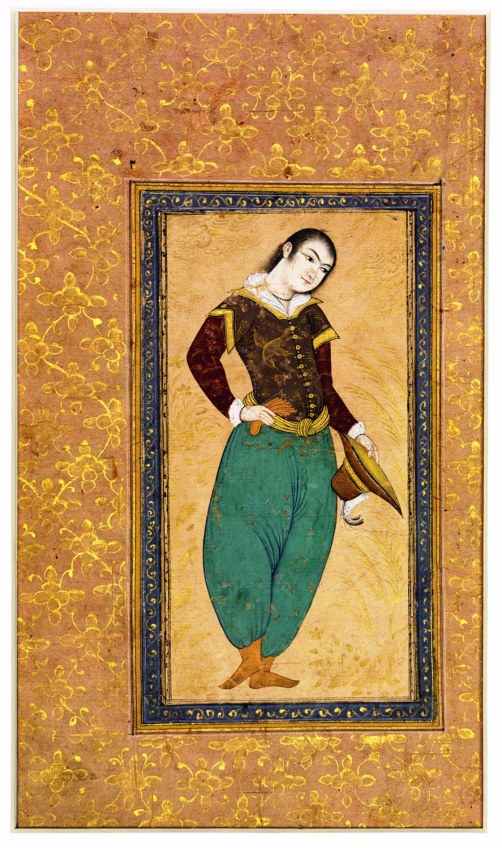 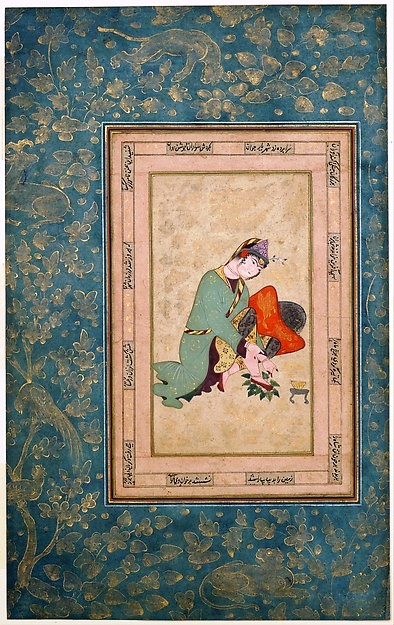 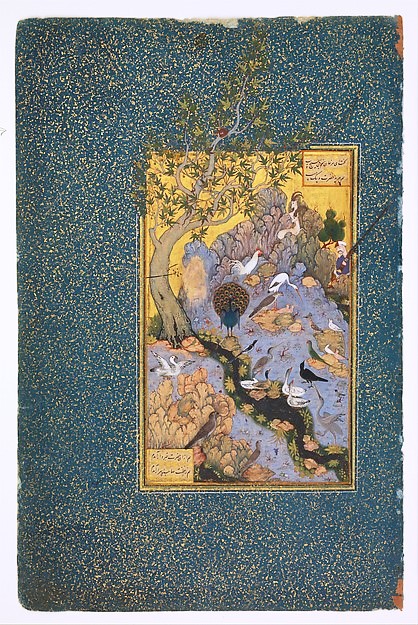 The Concourse of Birds by Habiballah of Sava, Iran, c. 1600

The Concourse of Birds by Habiballah of Sava, Iran, c. 1600
http://www.metmuseum.org/art/collection/search/451725 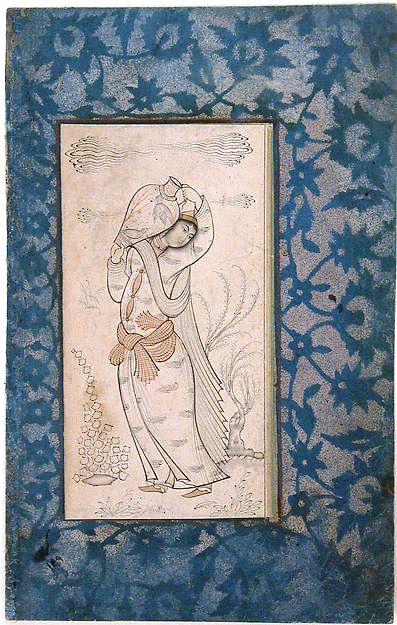 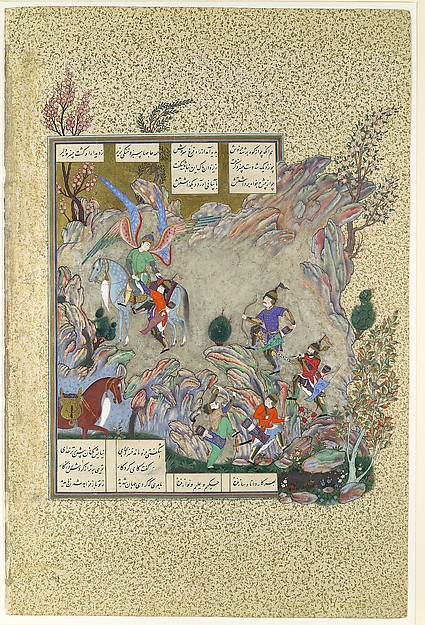 Jean Chardin, a French jeweler who traveled throughout Iran in 1664–70 and again in 1671–77, exclaimed that Isfahan was “the greatest and most beautiful town in the whole Orient.” He described the city’s population as a mix of Christians, Jews, fire-worshippers, Muslims, and merchants from all over the world. He counted 162 mosques, 48 colleges, 802 caravanserais, 273 baths, and 12 cemeteries, indicating ‘Abbas’ extensive architectural work in the city. Among the most scenic quarters was the area behind the Ali Qapu, where a series of gardens extended to the Chahar Bagh, a long boulevard lined with parks, the residences of nobles, and the palaces of the royal family. Tile panels and frescoes from the pavilions of the Chahar Bagh in the Museum’s collection are examples of the lavish decoration of these structures. (MMA)

Venice and the Islamic world is a very long story. It includes, for instance, the use of a lingua franca, a simplified hybrid language, mostly Italian, that was understood in every port in the Mediterranean Basin.

It also tells the story of the compulsory trip to the Orient young Venetians undertook. I should also stress the notion of exchange. It was not exploitation of the Orient but an exchange. The word “mirror,” used above, is appropriate. For instance, Venetians imitated the glass made in the Orient until Muslims bought Venetian glass for their Mosques. We could even suggest that the love for all things oriental, “turquerie” in our case, preceded 18th-century Europe. Merchants travelling to the Orient brought back souvenirs.

Works displayed in the exhibition depict a mostly joyful and somewhat diverse Orient as do the texts written for visitors to the exhibition. Each text leads to another text. The Orient, Syria for instance, was home to local and old Christian communities: Assyrians, Armenians, and Egypt, home to Coptic Egyptians, etc.

I discovered a Bellini album. It seems Gentile Bellini was the first Orientalist, but of a different breed than 19th-century Orientalists (see Orientalism, Wikipedia). Yet, the conquest of Constantinople was a catastrophe. It divided the population of the various countries of Eastern Europe between Christians and Muslims, and this fragmentation was reflected in the wars that followed the dissolution of the Soviet Union.

I am omitting the works of European artists: Gentile Bellini and his pupils, three of whom are Giovanni di Niccolò Mansueti, Vittore Carpaccio (15th century Venice) and Giorgione (1476 – 1510). They were influenced by the Orient. So was Albrecht Dürer (21 May 1471 – 6 April 1528), who lived shortly after the fall of Constantinople. 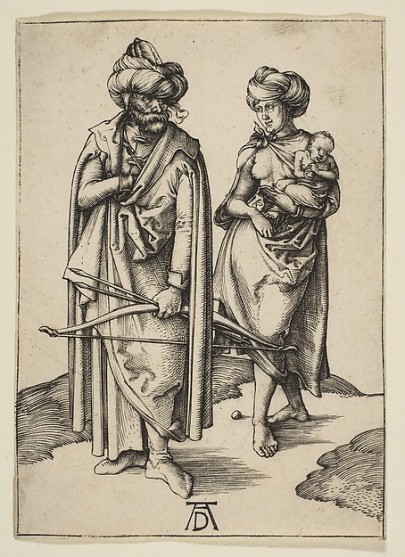 Music, the Printing Press and the Vernacular

Venice was also a turning-point in music. The Franco-Flemish lands had been the cultural hub of Europe as polyphony developed, including the madrigal, a song in the mother tongue. The Netherlandish composer Adrian Willaert (c. 1490 – 7 December 1562), of the Franco-Flemish school taught music in Venice and was the kapellmeister of the Basilica di San Marco. He founded the Venetian School, music. Polyphony is a product of the West.

In fact, the Renaissance is the birthplace of a nationhood and nationalism based on the use of a common language. Johannes Gutenberg (c. 1398 – February 3, 1468) invented the movable type printing press (c. 1440) to the delight of Venetians. It all started in Venice. As of the Renaissance, the invention of the printing press allowed the development of literature written in the vernacular, the mother tongue. Greek scholars could have the works of antiquity copied rapidly, but so did authors who wrote in the vernacular, a national language. Associated with the validation of the vernacular are Venetian Cardinal Pietro Bembo (The Petrarchan Movement), Sperone Speroni (Dialogo delle lingue, a defense of vernacular languages instead of Latin, Joachim du Bellay (Défense et illustration de la langue française) and Geoffrey Chaucer.

The relationship between the Ottoman Empire and the West deteriorated, but for a very long time, as the port central to the economy of countries bordering the Mediterranean, Venice was rich and it never fell to the Ottoman Empire.

“Despite all of the wars, Venice remained a privileged partner, thanks to an almost perfect balance between religious spirit, chameleon-like diplomacy, and acute business sense.”  (MMA)

The above quotation will be our conclusion.

“Calligraphic Composition in Shape of Peacock,” Folio from the Bellini Album
http://www.metmuseum.org/art/collection/search/451978?sortBy=Relevance&ft=Islamic+Art&offset=1280&rpp=20&pos=1297 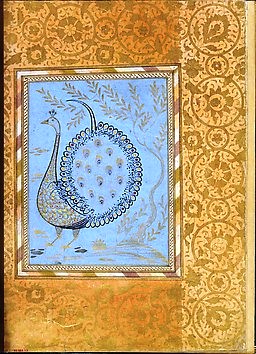 The True Moor of Venice (a lecture)
Michael Barry: “The Three Philosophers ”
MMA 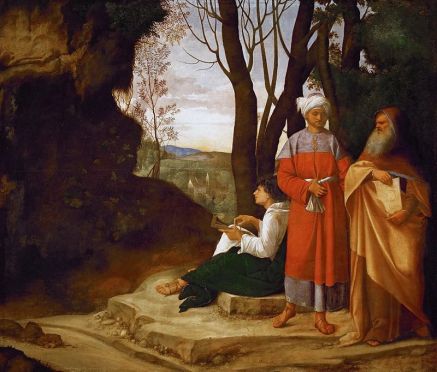 The Three Philosophers by Giorgione, finished by Titian the MMA) 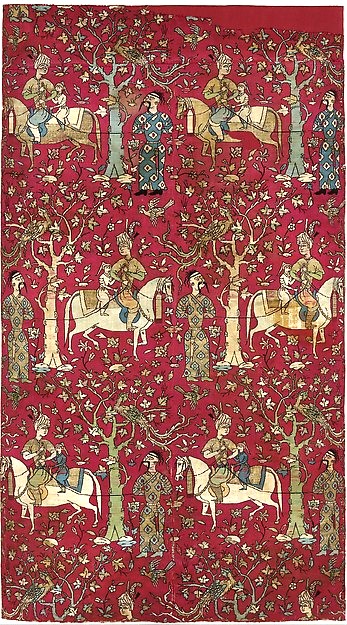 I have erased the beginning of this post. It contained information on an event of extreme cruelty that led to severe losses and still causes episodes of disabling fatigue and life-threatening anxiety. During such episodes, I cannot write or look after myself properly. My blog suffers. It’s a short post. 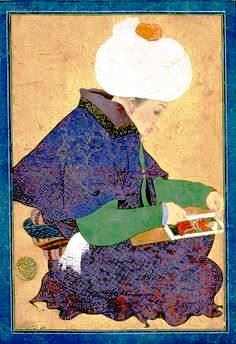 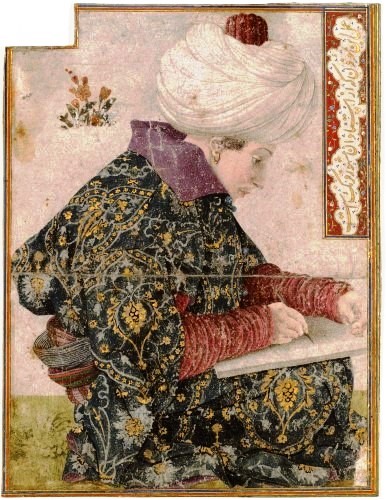 However, I have done more investigative work on Muslims, Armenians and the concept of nationhood. Religion is a factor in nationhood, but it is not as significant as the use of a common language. Even in the Islamic world, countries accepted plurality. The millet system is a proof of religious tolerance. For instance, in the case of the genocide of Armenians, the Ottomans feared Armenians would enter into an alliance with Christian Russia.

Nationhood is rooted in several factors, but langage overrides faith. State and speech is a product of the Renaissance and a result of Johannes Gutenberg‘s invention, in 1439, of the movable type printing press. Constantinople was defeated in 1453 and its Greek scholars fled to Italy carrying books. The printing press had just been invented when Byzantine scholars inaugurated the Renaissance. Literacy spread, creating a middle class, and it brought the validation of the vernacular, and the writing of songs in the mother tongue, or madrigals, but polyphonic, mixing voices. This is a subject we have covered, but not in the context of nationhood and nationalism.

A colleague told me about the Bellini knot, so I looked at the Metropolitan’s collection and found four Bellini rugs. I also found a Safavid dynasty tapestry or rug featuring the mille-fleurs motif. Keeping fabrics in good condition is difficult. Flanders may therefore have influenced the East. The Franco-Flemish lands were the cultural hub of ‘Europe’ before the Renaissance, in music especially, but tapestries and rugs were made in Flanders, as well as the illuminations of Books of Hours and other illuminated manuscripts. There were exchanges. 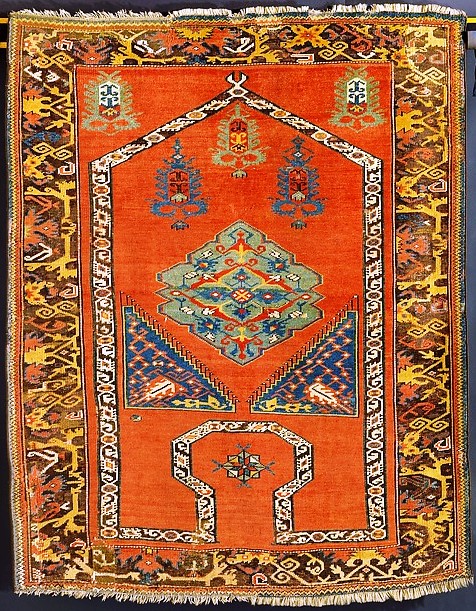 Particularly interesting is the position of Venice. It was very close to the Ottoman Empire. Trading led to use the of a lingua franca. A simplified Italian was the lingua franca when Bellini travelled to Constantinople. In 2007, the Metropolitan had an exhibition on Venice and the Islamic World, 828 – 1797.

I will close here, but this discussion will be continued. 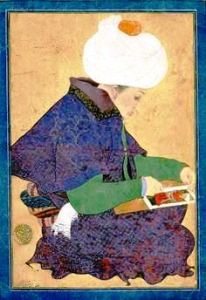