I have used the above image several times. It is Goya’s 43rd print in his series of 80 prints entitled Los Caprichos. It is a fine illustration of cultism and extremism.

I will be writing about Covid-19. Cases are numerous and given the number of individuals who are contracting Covid-19, we are looking at the harm anti-vaxxers are causing, including self-harm. Reason has fallen asleep. Let us first look at the need to raise the US debt ceiling.

Some of my readers may not have understood a reference to the debt ceiling. It applies to the economy of the United States. This subject is both difficult and easy to understand. Superficially, it goes as follows. If the United States does not raise its debt ceiling, it is proving that it hasn’t enough money to pay its debts. If it does not raise the debt ceiling, it can no longer borrow money and it loses the confidence of investors, the stock market. If investors do not invest, and the United States cannot borrow money, a recession, if not a “crash,” is unavoidable. The pandemic has been very costly, which means that the debt is high, and that the debt ceiling must be raised. A nation cannot put aside its economy. The following article contains a little drawing that may be helpful.

At this point, the Republicans (Mr Trump’s party) are suggesting that they may not allow the Biden administration to raise the debt ceiling. It’s a nasty game. If the Republican party prevents the United States from raising its debt ceiling, everyone would be hurt, including the Republicans and our global economy. Therefore, in a comment, I used the expression “to cut your nose off to spite your face,” which means that Republicans would hurt themselves in an attempt to hurt the Democrats. Therefore, sanity and plain common sense dictate a rise in the debt ceiling. One must cultivate a conciliatory spirit.

Similarly, sanity dictates vaccination. People who are not vaccinated are at risk and these unvaccinated individuals are probably cultists. Tens of thousands will die and the dead will soon be anti-vaccination militants. We are no longer looking at unvaccinated individuals who were neglectful. If they have lost a dear-one in the Pandemic, these persons may be convinced to be vaccinated. Cultists will not. They do not believe in Covid-19 and think the vaccine will poison them. If one tries to persuade them that Covid kills and that the vaccine is “adequate” protection, cultists will dig in their heels. Cultists do not think. They do not use “reason.”

So, yesterday, Quebec passed a law prohibiting demonstrations by anti-vaxxers and by Covid related activists near schools or near institutions where persons have not been vaccinated. They must keep 50 meters away. Initially, children did not contract the coronavirus. They are, therefore, the last to be vaccinated, hence Bill 105. If one cannot reason with someone else, a law is passed. Governments protect their endangered population. A person who sues the government for violating his or her freedom will lose. Yet, anti-vaxxers may sue. Under Bill 105, protestors will pay a fine, but they are not facing imprisonment. Not yet.

Covid-19 and its Variants: an alarming number of cases

After hearing that we were required to obtain a vaccine passport and that healthcare workers who were not vaccinated before 15 October 2021 would be replaced, I could see light at the end of the proverbial tunnel, but I now see darkness. Governments know how many have died of Covid-19, and they know that the vaccine is “adequate” protection. So, cultists are like Republicans contemplating not raising the debt ceiling. They may and will die to avoid death. Extremism is very dangerous.

Would that their defiance and plain arrogance did not boil down to anti-social behaviour. Cultists are not mere Doubting Thomases. As inferred above, doubting Thomases will be vaccinated if they lose a wife or a husband. I agree, some medications, including the vaccine, are potentially harmful. But the vaccine is all we have.

Once again, humans are proving that they are their own worst enemy. Not only are the unvaccinated cutting off their nose to spite their face, but they are causing others to contract the coronavirus, thereby making themselves agents of the virus, and worse… They themselves will suffer the death they wished to avoid: their own death.

Cultist | Definition of Cultist by Merriam-Webster

Everything you need to know about COVID-19 in Alberta on Wednesday, Sept. 22 | CBC NewsAlberta doctor under fire for spreading ‘completely false’ COVID-19 claims | CBC News

Please start the Video now.  Lustucru is the second song.

Lustukru (Lustucru) is a croquemitaine (a bogeyman), a folkloric and transcultural figure who eats up children still awake past bedtime.  Lustucru is el coco depicted by Francisco Goya, whose Tres de mayo 1808 (May Third 1808), 1814, and Desastres de la guerra, Los (The Disasters of War) constitute a haunting depiction of the horrors of war.

Théodore Botrel (14 September 1868 – 28 July 1925) is the composer of Le Grand Lustucru.  His greatest success was La Paimpolaise (The Girl from Paimpol).  At the height of his career, Théodore Botrel was associated with Aristide Bruant.  He sang in his cabaret, Le Mirliton.  However he performed mainly at the Chat Noir, a cabaret known because of Théophile Steinlen‘s cat posters, and at the Chien-Noir, a club.

This was Henri de Toulouse-Lautrec‘s Montmartre.

The translation of Le Grand Lustukru or Lustucru is mine. 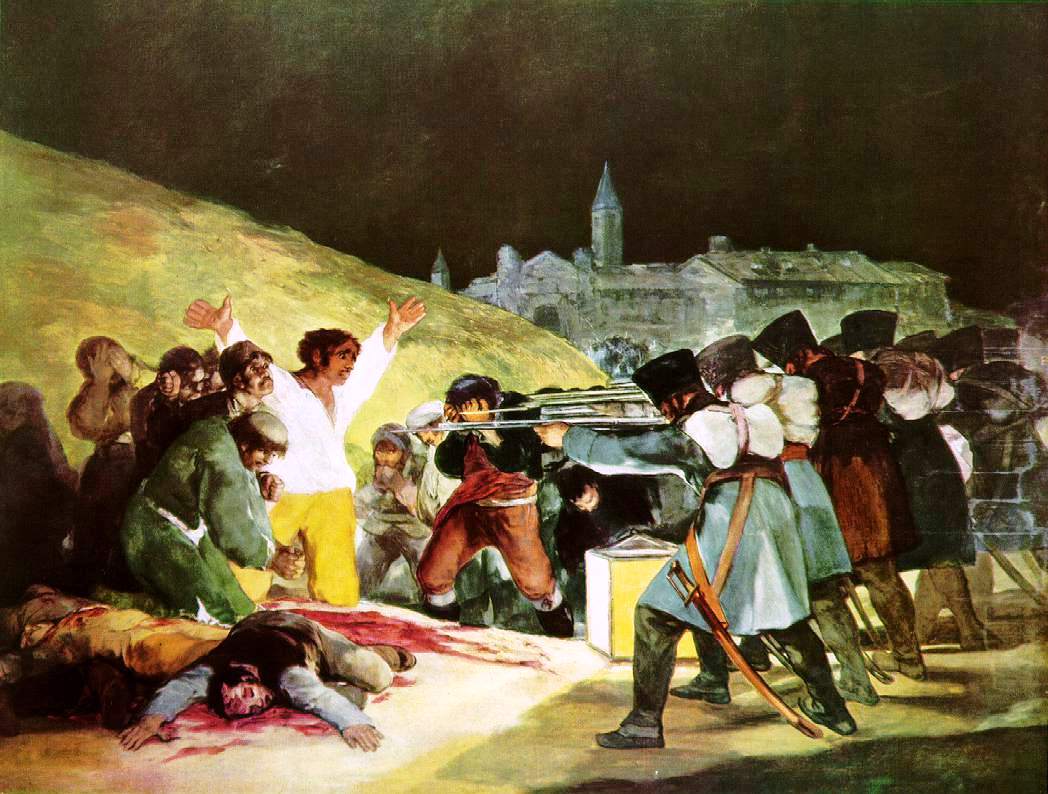 Executions of the Third of May, by Francisco Goya, 1814

Allow me a few more comments on “entitlement” or “self-entitlement,” a state of mind that currently numbs reason among members of the National Rifle Association.  As I have written before, the spirit of the Second Amendment is to protect the American people, which it no longer does despite the presence of a “well regulated [sic] militia.”  Consequently, by virtue of the Second Amendment itself, one cannot allow the bearing of firearms by civilians as it now endangers “the security of a free state.”  Matters have turned around and the law should reflect current needs.

“A well regulated militia being necessary to the security of a free state, the right of the people to keep and bear arms shall not be infringed.”  (The Second Amendment)

Citizens all over the world are entitled to safety.  In other words, they have “rights.”  However, entitlement, when carried too far, may and does stand in the way of reason.  In fact, at a certain point, self-entitlement constitutes a mental disorder.  Let me quote Wikipedia again:

“In clinical psychology and psychiatry, an unrealistic, exaggerated, or rigidly held sense of entitlement may be considered a symptom of narcissistic personality disorder, seen in those who ‘because of early frustrations…  arrogate to themselves the right to demand lifelong reimbursement from fate.'” (Entitlement)

The initial purpose of the Second Amendment was to ensure “the security of a free state,” the “free state” lacking a “well regulated militia.”  If members of the National Rifle Association cannot see that the United States now possesses “a well regulated militia,” i.e. the necessary law-enforcement agencies, and that the bearing of arms currently threatens “the security of a free state,” they and their supporters have lost the ability to use “reason” and imperil “the security of a free state.”  Thousands of Americans die from gun violence every year, including children, thereby making it obvious that people who bear arms threaten the safety of a “free state.”  If Americans did not bear arms, no American could shoot another American and potential killers could not purchase the powerful firearms that enable them to shoot innocent schoolchildren.

Interestingly, by threatening “the security of a free state,” the NRA also threatens the Social contract and, therefore, the very concept of nationhood.  The purpose of nationhood is safety.  In its entirety, the United States Declaration of Independence, drafted by Thomas Jefferson (April 13, 1743 – July 4, 1826) and adopted by the Second Continental Congress, reads as follows:

“We hold these truths to be self-evident, that all men are created equal, that they are endowed by their Creator with certain unalienable Rights, that among these are Life, Liberty and the pursuit of Happiness.–That to secure these rights, Governments are instituted among Men, deriving their just powers from the consent of the governed, –That whenever any Form of Government becomes destructive of these ends, it is the Right of the People to alter or to abolish it, and to institute new Government, laying its foundation on such principles and organizing its powers in such form, as to them shall seem most likely to effect their Safety and Happiness…”

There may be flaws in the United States Declaration of Independence, but it would be my conviction that “Life, Liberty and the pursuit of Happiness,” are “unalienable Rights.”  Consequently, members of the National Rifle Association are at odds with the United States Declaration of Independence.  Because of guns, lives are lost.  If I were a parent living in the United States, I would fear letting my children attend school.  Moreover, those parents who have lost children to a gunman, the parents of Newtown, grieve profoundly and will probably do so until they reach the end of their own journey on earth.

In short, given that they live in defiance of the Social contract, members of the National Rifle Association cannot be considered fully fledged citizens, no more than the rich people who deposit their money in offshore accounts.  Such people also threaten the concept of nationhood.  In fact, it could well be that Americans who once owned slaves and now refuse to pay their fair share of taxes feel they are entitled to a measure of compensation for a “right” they have lost.  Yet, slavery is not consistent with the declaration of independence which holds as “truths” that “Life, Liberty [my bold letters] and the pursuit of Happiness” are “unalienable Rights.”  Slavery was an aberration.

A Quotation from the Boston Globe

May I quote the first paragraph of an article by Boston Globe columnist Jeff Jacoby entitled: ‘All men are created equal’ is not hypocrisy but vision and published on 4 July 2010 (please click on the title to read the entire article).

‘HOW IS it,’’ the great English man of letters Samuel Johnson [my link] taunted Americans 235 years ago, “that we hear the loudest yelps for liberty among the drivers of Negroes?’’ His fellow Englishman Thomas Day [my link] remarked in 1776 with equal scorn: “If there be an object truly ridiculous in nature it is an American patriot signing resolutions of independency with the one hand and with the other brandishing a whip over his affrighted slaves.’’

The Spirit and the Letter of the Second Amendment

In my opinion, worded in full, the Second Amendment should state that “a well regulated militia being necessary to the security of a free state, [in the absence of a well regulated militia] the [current] right of the people to keep and bear arms shall not be infringed.  That would be its spirit.  Statements need not always be worded in full because parts are inferred (see inference) and, therefore, understood.

There is currently in the United States a well-regulated militia.

I will conclude by writing that certain goals remain, such goals as “the security of a free state.”  However, the means can change.  Before the invention of airplanes, a New Yorker’s goal may have been to go to Paris, but his means of getting there was to board a trans-Atlantic or Ocean liner.

(My dear colleague Stefania has used this piece of music.  Allow me to praise her excellent taste.)

The painting is by Francisco Goya and is entitled: “Dance of the Majos at the Banks of Manzanares.”  (Photo credit: Goya, The Complete Works). 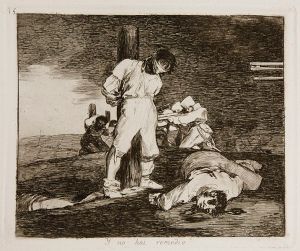