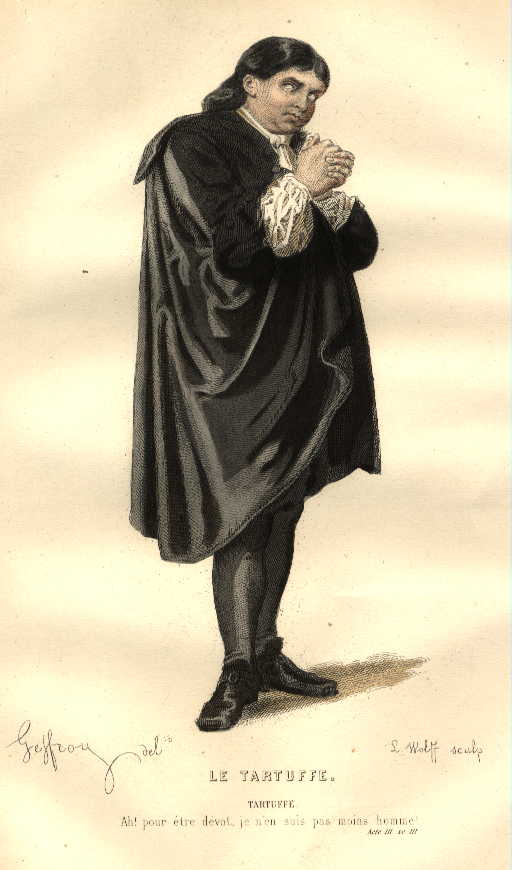 “Because they portray the abuse of power by aristocrats and related themes, both plays were censored; as a result, the character of Figaro—adroit, irrepressible, insubordinate—has accrued much symbolic value over the centuries. His name was adopted by a leading French newspaper, Le Figaro.”[I]

The Rehabilitation of Sentiment

In 1767, Beaumarchais wrote his Essai sur le genre dramatique sérieux (online BnF) FR (“Essay on the Genre of Serious Drama). Serious drama is also named “drame bourgeois,” (bourgeois drama), a theatrical genre that is neither tragedy nor comedy, but it has a happy ending in The Guilty Mother; or, the other Tartuffe, also entitled The other Tartuffe; or, the Guilty Mother.

Beaumarchais is often credited with having created le drame bourgeois, or bourgeois drama. However, the idea was encyclopédiste Denis Diderot ‘s (5 October 1713 – 31 July 1784). Denis Diderot and Jean le Rond d’Alembert (16 November 1717 – 29 October 1783) are the co-founders of the Encyclopédie. The creation of bourgeois drama was not a rejection of the solidly-entrenched commedia dell’Arte. However, a new aesthetics had arisen, associated with:

Reason vs Sentiment: The Primacy of Reason

Beginning with Descartes’ Discours de la Méthode (1637), reason had prevailed over sentiment. However, reason’s hegemony had been challenged by Blaise Pascal (19 June 1623 – 19 August 1662). According to Pascal, there were deux entrées de l’âme, or two entrances to the soul and to persuasion: l’esprit de finesse (intuition, instinct) and l’esprit de géométrie (reason) (Pensées; published posthumously. Immanuel Kant (22 April 1724 – 12 February 1804) would also call reason into question in The Critique of Pure Reason  (1781). 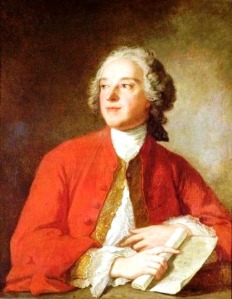 In the case of the character Figaro, a zanni, the die is cast: Alea iacta est. (See Alea iacta est, Wikipedia.) The moment he stepped on the stage, Figaro became a permanent symbol of débrouillardise (“resourcefulness,” [but the meaning is lost in translation]). Le Figaro, a newspaper, or newspapers, is named after Beaumarchais’ Figaro.

Figaro remains a clever valet, a zanni, throughout the Figaro trilogy, put particularly in the Marriage of Figaro. In the Preface (online FR) to The Guilty Mother; or, the other Tartuffe, Beaumarchais explains that he, Beaumarchais, has aged and that Figaro himself has also aged, not to mention Beaumarchais’ audience. (See L’Autre Tartuffe ou La Mère coupable [EBook #34841] FR.)

The Guilty Mother, a drame bourgeois

In other words, The Guilty Mother; or, the other Tartuffe (c. 1791-2) differs from The Barber of Seville (1775) and the Marriage of Figaro (1784). The Guilty Mother; or, the other Tartuffe is a bourgeois drama EN (a middle-class tragedy), or drame bourgeois EN. However, all three plays belong to the Age of Enlightenment. In the first two instalments of the “Figaro trilogy,” Figaro opposes the supposed privilege of the seigneur to be the first man to sleep with the bride. As for The Guilty Mother, the play is consistent with the rehabilitation of sentiment, inaugurated by Rousseau. Finally, all three plays respect the conventions of comedy as a genre, including The Guilty Mother.

The Guilty Mother was to be produced by the Comédiens français in 1791, but disagreements arose between the Comédiens and Beaumarchais that caused the play not to be staged until the following year, at the Théâtre du Marais on 26 June 1792.

The cast includes the Count, Almaviva, the Countess (the former Rosina of the The Barber of Seville), Figaro, Suzanne, Bégearss and a notary, maître Fal. Bégearss is an Irishman, a Tartuffe, a hypocrite and a swindler. Bégearss is an alazôn, or the blocking character of the play. Tartuffe is a comedy by French dramatist Molière (1622 – 1673). The play was first performed in 1664, but was revised twice before it was deemed morally acceptable. It was therefore rewritten twice over a period of five years (1664 – 1669).

More than twenty years have elapsed since Figaro married Susanna and both are employed by the Count and Countess Almaviva, the Countess being the Rosina of The Barber of Seville. During the Count’s absence, a prolonged absence, Rosina, the Countess, and Chérubin, a page, spent a night together. She then felt guilty and told Chérubin that what they had done was wrong. Chérubin  therefore joined the army in order to be killed. However, he wrote to the Countess to express his love and regrets. The Countess could not part with Chérubin’s letter and had it inserted in the hidden bottom of a jewellery box.

After spleeping with Chérubin, Rosina, the Countess, discovered she was pregnant and gave birth to Léon who is now twenty. The Count and Countess are mourning the death of their son, in a duel, and has a second son, Léon, but he suspects Léon is not his son. Meanwhile, however, the Count has also fathered an illegitimate child, a daughter named Florestine. She lives in her father’s house as his ward and godchild. She does not know she is the Count’s daughter until Bégearss tells her as well as the entire family. Florestine is devastated because she and Léon are in love, but may be brother and sister. In such a case, a marriage would not be possible.

The Count and the yet ill-informed Countess both think Florestine should marry Bégearss, a major in the Spanish military. To ensure he is the sole heir to the Count’s fortune, Bégearss is making arrangements for Léon to leave for Malta, accompanied by Figaro. As noted above, Bégearss is a Tartuffe (a hypocrite and a swindler), hence the subtitle of Beaumarchais’ drame bourgeois: The other Tartuffe. 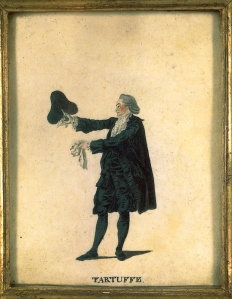 Tartuffe is a character created by Molière (1622 – 1673). He feigns devotion yet tries to seduce Elmire, Orgon or the pater familias‘ wife, and also gains a stranglehold on Orgon himself. Molière’s Tartuffe is in possession of incriminating  information a friend has entrusted to him. This information is hidden in a “cassette” (= Rosina’s jewellery box), but Orgon turns the cassette over to Tartuffe. It could ruin the family.

Back to The Guilty Mother

Figaro manages to take the Count’s money to Monsieur Fal, the Count’s notary, but Bégearss has gone to get it. Léon and Florestine wish to marry, which is how comedies should end, but this is not possible because they may be brother and sister. Bégearss has given the Count the letter that confirms the Count’s suspicions regarding his wife’s infidelity. Léon is not his son. It is not known, however, that Florestine is the Count’s lovechild and that there is no consanguinity between the innamorati.

At some point, Figaro, the notary, Monsieur Fal, and Bégearss return. Bégearss has the money, but Figaro will not let him keep it. The Count is now willing to forgive the Countess, who has fainted with grief when he rebuked her. Therefore, this drame bourgeois has a happy ending. Bégearss has been unmasked and the Count realizes he loves the Countess. The Count and Countess adopt Léon and Florestine and the two free to marry. All’s well that ends well (comedy) and the deceiver (Bégearss) is deceived: le trompeur trompé.

The drame bourgeois (middle-class tragedy) should be as it is called: bourgeois, or middle-class, but the Count is an aristocrat. Consequently, one senses a small degree of dissonance. The Guilty Mother is sentimental. Léon and Florestine cry when their fate is known, i.e. their being related and, therefore, not able to marry. Moreover, the Countess faints as the truth is revealed and the count rebukes her. It could therefore be said that there is Sturm und Drang to Beaumarchais’ sentimentality rather than a tinge of the “galant” style (empfindsamer Stil). I am borrowing this term from the history of music.

Yet the play is consistent with the Age of Enlightenment’s “growing importance of sentiment”[II] and it therefore belongs to the same category as Denis Diderot’s Entretiens sur le Fils naturel.

The Drame Bourgeois: The English Connection

The drame bourgeois can be associated with Nivelle de la Chaussée‘s comédie larmoyante (1735), or “tearful comedies.” It finds some of its origins in a very sentimental form of drama. But, Beaumarchais’ plays can also be associated with the plays of Pierre de Marivaux, the foremost dramatist of eighteenth-century France, the author of Arlequin poli par l’amour, but, more importantly, the creator of Le Jeu de l’amour et du hasard (The Game of Love and Chance; 1730). Marivaux makes use of the stock characters of the commedia dell’arte.

However, Denis Diderot (5 October 1713 – 31 July 1784) was an admirer of both Samuel Richardson and Laurence Sterne, the author of “Tristram Shandy, Gentleman.” He was influenced by them. Richardson wrote Pamela; Or, Virtue Rewarded (1740) and Diderot, his Entretiens sur le Fils Naturel, ou les Épreuves de la vertu (1757; produced in 1771). In 1745, Diderot translated the 3rd Earl of Shaftesbury‘s Inquiry concerning Virtue (L’Essai sur le mérite et la vertu). English actor David Garrick (from Garrigues) was a favourite during the French Enlightenment.

Enlightenment ideologies run through the Figaro trilogy. The first two instalments are rooted in the topsy-turvy world of the Roman Saturnalia and the raucous revelry of the Greek kōmos. Comedy is subversive, as is a revolution. Moreover, the final play is a response to the growing importance assigned to sentiment. The two-year (1752-54) Querelle des Bouffons (“Quarrel of the Comic Actors;”) attests to the requirements of sentiment. Moreover, Pergolesi‘s La Serva padrona, an intermezzo, or musical equivalent of the theatrical interlude, a servant is mistress, which is carnivalesque.

In the plays of eighteenth-century French dramatist Pierre de Marivaux (4 February 1688 – 12 February 1763), it seems no one is as he or she appears. This aesthetics also forms the basic plot of Mozart’s K. 588, Così van tutte (Women are all the same).

But the real link between each play of the Figaro trilogy is the combative Figaro, born in the commedia dell’arte.

I wish you all a fine weekend.