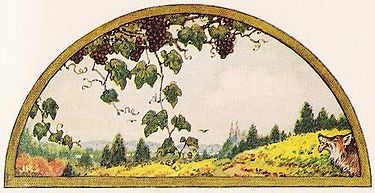 The Fox and the Grapes,* illustrated by John Rae, 1918

*The Fox and the Grapes (En)

Driven by hunger, a fox tried to reach some grapes hanging high on the vine but was unable to, although he leaped with all his strength. As he went away, the fox remarked, ‘Oh, you aren’t even ripe yet! I don’t need any sour grapes.’ People who speak disparagingly of things that they cannot attain would do well to apply this story to themselves.[i]

There is use for fantasy, but if it is taken all the way to bovarysme, fantasy may prove destructive.

Woman with a Pearl, by Corot*

Those of you who have read Madame Bovary might recall that having married a country doctor, Charles Bovary, Emma Bovary, Flaubert’s protagonist, seeks lovers whom she thinks will bring her happiness, but only bring the most ephemeral of pleasures. She wilts as they “gather roses.”

One scene is particularly revealing. Madame Bovary and her husband are invited to a ball at the castle of la Vaubyessard.  There, they dine in style, but across the table, there sits an old gentleman who his dribbling and could be described as the very incarnation of decay. That scene is an Ecce homo: “behold the man” (John xix.5) reminiscent of French seventeenth-century writings, where the ‘grands’ are reminded by poets, moralists and preachers that all is vanity: vanitas vanitatum. We grow old and die, including princesses and Louis XIV.

In describing the old man, Flaubert uses a sentence that is most revealing: “[h]e had lived at court and slept in the bed of queens! (Madame Bovary, Chapter 8, Project Gutenberg).  The use of the plural form both mythifies and trivializes the old man. Emma sees him as ‘grand,’ but the reader sees him as debauched and decrepit. Flaubert’s Emma ends up committing suicide. 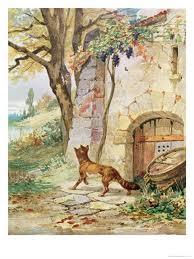 The Fox and Grapes

In short, like the fox, Emma wants the equivalent of luscious grapes, but unlike the fox, she does not have the ability not to want what she cannot have.  Deprecation is not necessary, but we need to make do with what we have.

Allow me to comment that having allowed the fox to be the trickster he has long been, La Fontaine gives him wisdom. Besides, in another fable, entitled Le Chat et le Renard

[ii] (9.XIV) or the The Fox and Cat (En), La Fontaine opposes the cat and the fox. The fox says he has a hundred tricks in his bag. As for the cat, he replies that he has but one trick, and it works. Just then, dogs attack and the cat climbs up a tree. The Fox and Cat, is an ancient fable, dating back to the Pañcatantra, but once again, La Fontaine choses to demote the archetypal trickster.

We all need fantasy, but we also need to tame reality. Joy is in the details. One can derive so much pleasure from sitting in a sun-filled living-room, next to the fireplace, safely ensconced in a comfortable armchair, reading or sharing coffee and cake with a friend. There are luscious grapes we can reach, if we look.

[ii] Both are contained in Volume One of La Fontaine’s Fables.