About the new apartment …

I’ve not finished settling in my new apartment, but everything I need works: the kitchen, the bathroom and the laundry room. As for the bedroom, it has its bed and dressers, but there are too many bookcases. This I can deal with …

But I don’t have a parking space in the basement garage, and, this, I cannot deal with …

Initially, this building had one interior parking space for each apartment. However, the first owners were given the option not to purchase their parking space, a mistake, and the parking space disappeared.

It could be that someone bought a second parking space, but I met with members of the Board of Directors, to whom I had written a letter, and they told me that realtors had offered prospective buyers a second parking space to increase their chances of selling quickly. Moreover, it is entirely possible that someone saw an empty parking space and started using it: squatter’s rights. If one has the gadget that opens the garage doors, they can drive in a second vehicle.

I was fine last winter. The people who sold me the apartment knew an owner who could not park her car in the basement during the winter months because she has studs put on her tires. She let me use her indoor parking space and I may be able to use that space again next winter.

But the problem has not been resolved. Persons whose parking space disappeared are inconvenienced in many ways:

Members of the Board of Directors with whom I spoke told me that errors committed in the past cannot be corrected. That’s not true. It may be difficult to correct an error, but not to correct an error is an error. To begin with, selling an apartment with more than one parking space can no longer be tolerated.

In the letter, and doctor’s note, I put in the Board of Directors’ mailbox, I proposed, indirectly, that it was probably best to give each owner a parking space in the interior garage. A warm car would always at the ready. Besides, what choice do we have? We cannot enlarge the basement. Morover, if an older person has to be outdoors scraping the ice off his or her car, it will be conesidered Elder Abuse: maltraitance des aînées.

As for the second or third car, it can be parked in the exterior parking lot and someone can be hired to clean and remove the car, and to return it to its place. With regard to penalties, these should be lifted. Penalties are offensive if a situation is prejudicial to owners whose parking space was “sold.” All that is needed is good will on every one’s part.

Last year, the government reimbursed my removal expenses, because I had moved to a building that had an elevator and could otherwise accommodate the needs of a senior citizen. It appears it is less expensive for the government to keep older citizens in their home and send caregivers.

I may stop driving in the near future, but I still think that it is in everyone’s best interest to find a solution.

The men with whom I spoke will no longer accept to serve on the Board of Directors. They sent everyone a note to that effect.

I apologize for telling you that story. Please concentrate on the pigeons.

This takes us back to pigeons, temporarily. 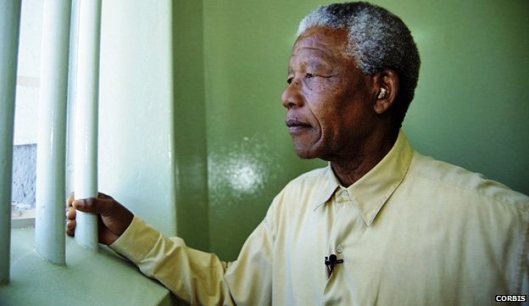 (Please allow me to allude to the United States in my praise of Nelson Mandela.)

We often use the word “hero” somewhat frivolously. But Nelson Mandela was a hero, a genuine hero. He rose above years of imprisonment serene and forgiving. Nelson Mandela served 27 years of a life sentence because he could not accept the domination of one race over another race. He fought Apartheid, or the segregation of the Black population of South Africa from its White population. There was no equality, which means there could be no justice. 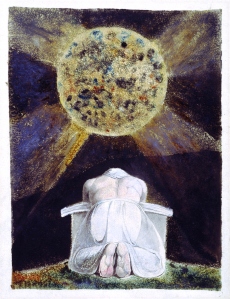 “The archetype of the Creator is a familiar image in Blake’s work. Here, the demiurgic figure Urizen prays before the world he has forged. The Song of Los is the third in a series of illuminated books painted by Blake and his wife, collectively known as the Continental Prophecies.”  (Caption and photo credit: Wikipedia)

Apartheid remains an evil. It is the plight African-Americans had to endure after they were ‘freed’ and it is a plight they still endure. Slavery ended 148 years ago, officially, and segregation has also ended, officially. However, all too often African-Americans are considered by many as an inferior race. United States citizens do not even spare President Obama, a good man. They claim wrongly that he impoverished America. They also claim that he does not know the Constitution.  President Obama knows the Constitution.  Because they are false, such accusations suggest a degree of racism.

Whatever the color of their skin, human beings are “created equal” and they constitute a ‘brotherhood.’ Yet, 148 years after the abolition of slavery, there are voter purges and white supremacists. The Ku Klux Klan is still active. That is Apartheid. So, did the Union win the war? Well, it did and it didn’t. Winning a Civil War is not easy. The issues that underlie the war stem from within. But the Civil War freed the Black and that was just, despite the losses suffered by slave owners. Therefore, it is everyone’s duty to abide by the principles the Civil War upheld: freedom and genuine equality, not a mere facade.

Fortunately, many descendants of individuals who ‘lost’ the war have since ‘won’ the war. They have grown to realize that human beings cannot be sold like cattle, tortured, executed and raped because they are a possession. We are born free. Racism is a form of Apartheid.

Ready to Die, but not to Kill

When Nelson Mandela left prison, he did not bear a grudge. I am sure there were times when the past leaped from behind, causing him anger and pain. But he retained his princely conduct. He was a royal among his people, the Thembu people, and a prince among humans.  He was a good person and goodness is the supreme achievement. Nelson Mandela did not blame anyone in particular for being convicted of treason. He attacked a wrong: Apartheid. He was ready to die for his cause, but he was not ready to kill.

In this respect, he resembled Mahatma Ghandi. He battled an injustice choosing a passive form of resistance. Like Ghandi, Nelson Mandela sought equality, without recourse to violence. He sought respect for colonized Africans, but he was not disrespectful of white Africans. That would have been wrong.

The garments one wears may show difference: a different culture or a different religion. But values are not garment-deep and they are not skin-deep. They come from the heart and from the soul.

The people I honour do not bear grudges. They treat others as they wish others to treat them. They remain compassionate despite the pain they have suffered. They see humankind as a brotherhood. They are not warriors or terrorists. They are not arrogant. On the contrary, they are humble. And they most certainly do not shutdown a government at a price that could feed millions and do so in an unjustifiable attempt not to pay taxes. If paying higher taxes allows the implementation of a safety net for a nation, one pays higher taxes.

Revenge is not justice

Revenge is not justice. We seek justice because there has to be justice. Human beings have rights and the attendant duties. There has to be justice and there has to be a degree of equality. We cannot possess another human being. And if one has caused great losses, one’s duty is to undo the wrong that has been perpetrated to the extent that it can be undone. But there cannot be revenge. It mustn’t be an “eye for an eye.” If it is, hatred persists. It passes down from generation to generation and efforts at reconciliation are forever futile. Bad faith sets in.

Nelson Mandela did not seek  to be avenged. He did not seek to punish those who had caused him to be imprisoned for 27 years for seeking justice for his people, which was his crime. He was much too caring a man to strike back in an ignoble manner. But he had a just cause. After leaving prison, he led his country. He was elected President of South Africa. He served one term and then lived in privacy.

When he died, Nelson Mandela was a “shadow of himself.” But not that he has left his earthy robe, he stands tall again and he smiles. This is how he will be remembered.