The Monarch as a Young Man

Frederick’s passion was his “profession,” to quote Catherine the Great of Russia. He was an aristocrat and “born to rule.” Other than his “profession,” Frederick was an excellent musician. He played the flute and was a surprisingly prolific composer. Harmony, counterpoint and form are demanding disciplines. Additionally, one’s melodies are the product of inspiration. Frederick was gifted. Frederick the Great (Wiki2.org) provides a list of Frederick’s compositions. It may not be a complete, but it is very impressive: 100  sonatas for the flute as well as four symphonies, etc. Frederick had a music room at Sanssouci, his castle in Potsdam, and his flute teacher was no less than Johann Joachim Quantz (30 January 1607 – 12 July 1773).

King Friedrich der Große admired all things French, Voltaire especially. Frederick, who learned French as a child, initiated a correspondence with Voltaire in 1736, before Frederick William I’s death. In the 1750’s, Voltaire moved to Prussia, at Frederick’s invitation. He was named chamberlain and appointed to the Order of Merit. Voltaire also received a salary of 20,000 French livres a year. He had rooms at Sanssouci (without worries), Frederick the Great’s castle at Potsdam, and also lived at Charlottenburg Palace. French was spoken at the Prussian court. Voltaire spent three years in Prussia. A misunderstanding separated host and guest, but the two reconciled. Frederick the Great was delighted to have known Voltaire. (See Voltaire, Wiki2.org.)

The influence of French philosophes and British intellectuals led Frederick the Great to write an “idealistic refutation” (Wiki2.org.) of Niccolò Machiavelli’s 16th-century’s Prince, entitled the Anti-Machiavel, published in 1740. Voltaire edited Frederick the Great’s Anti-Machiavel, also providing footnotes. A combined edition was published. Summarizing the Anti-Machiavel would be difficult, but, basically, it describes the king as “the first servant of the state.”

Peter the Great and Catherine the Great westernized Russia, but they also organized it. As for Frederick the Great, the most enlightened of despots, he modernized Prussia. All three despots also promoted, to a greater or lesser extent, religious tolerance. King Frederick the Great joined Freemasonry, as did many of his contemporaries.

In Prussia, the heart of the future German Empire, it became possible to occupy positions formerly reserved for the nobility. Bourgeois could be judges and senior bureaucrats. Frederick welcomed immigrants and he allowed freedom of the press and literature. Moreover, not only was he a musician, but he was also a patron of musicians and artists.  He reformed the Prussian Academy of Sciences. Although it is incomplete, one of Frederick’s finest achievements was the Prussian Civil Code. Civil codes organize a nation. Catherine II the Great of Russia also worked on devising a code of laws.

Frederick the Great was a fine and well-educated leader. He believed, however, that his “profession” had made him what he was. It hadn’t. One does not need to be an aristocrat to govern well. In short, Frederick was an exceptional leader and an extremely gifted gentleman, brilliant, who happened to be a king, and a despot.

Yet Frederick was also convinced that the Prussian landed noblemen, the Junkers, were the backbone of the state, and he continued accordingly to uphold the alliance between crown and aristocracy on which his kingdom had been built.

Catherine the Great Empress and Autocrat of All the Russias  by unknown (Wiki2.org.)

We are returning to our Enlightened despots. In the Encyclopedia Britannica,

Enlightened despotism, also called benevolent despotism, [is] a form of government in the 18th century in which absolute monarchs pursued legal, social, and educational reforms inspired by the Enlightenment. Among the most prominent  enlightened despots were Frederick II (the Great), Peter I (the Great), Catherine II (the Great), Maria Theresa,  Joseph II, and Leopold II. They typically instituted administrative reform, religious toleration, and economic development but did not propose reforms that would undermine their sovereignty or disrupt the social order.

Among the despots named above, Frederick II (the Great), King of Prussia, is our most prominent figure. He belonged to the Hohenzollern dynasty. But we must step back to Peter I (the Great) (9 June 1662, Moscow – 8 February 1725, Saint Petersburg) who defeated the Swedish Empire, and Catherine II (the Great) (21 April 1729, Prussia – 6 November 1796, Russia) who did not allow a disastrous marriage to rob her of her “profession” as an aristocrat. Both Peter I and Catherine II were despots, but they expanded and developed Russia in every way.  They are as Britannica defines enlightened despots. In this regard, both looked to Europe as a model and, in the case of Catherine II, mainly France. In the 18th century, French became the language of the Russian court and courtiers dressed as did Europeans. But soon Catherine dazzled Europe. 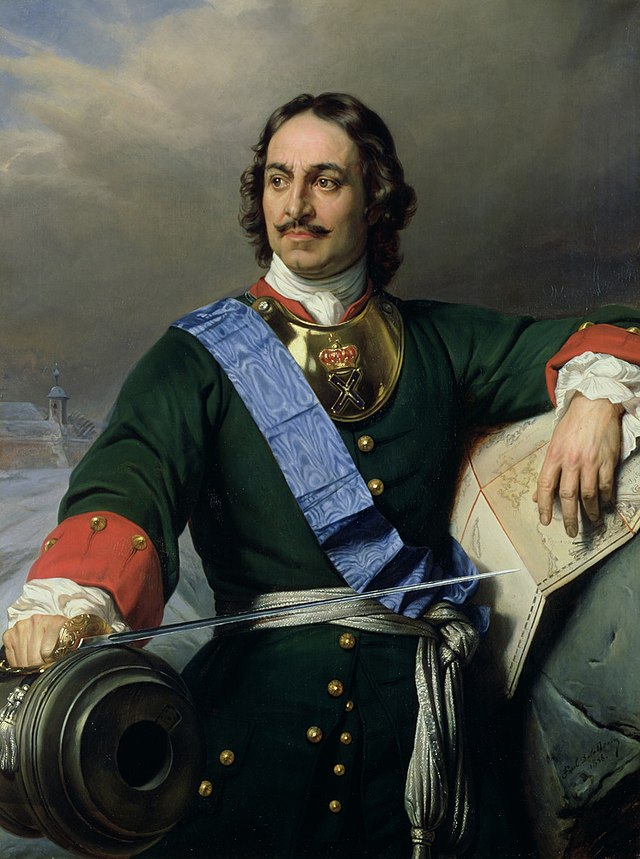 Given Peter I the Great‘s passion for conquest, we need to see maps. For instance, Peter I, of the Romanov dynasty, who reigned jointly with his sick half-brother Ivan V, from 1689 to 1725, wanted a port to the north, but west of Arkhangelsk, a port that abutted on the Arctic Ocean. In 1703, he founded Saint Petersburg, located north of Moscow, on the Neva River.

The Neva flows into the Gulf of Finland, thereby providing access to European countries and facilitating the westernization of Russia which, to a large extent, characterizes Russian enlightenment. Peter I (the Great) was ordained Emperor of “all the Russias” after defeating the Swedish Empire, in 1721, three years after King Carl XII of Sweden was killed at the Siege of Fredriksten, in 1718. 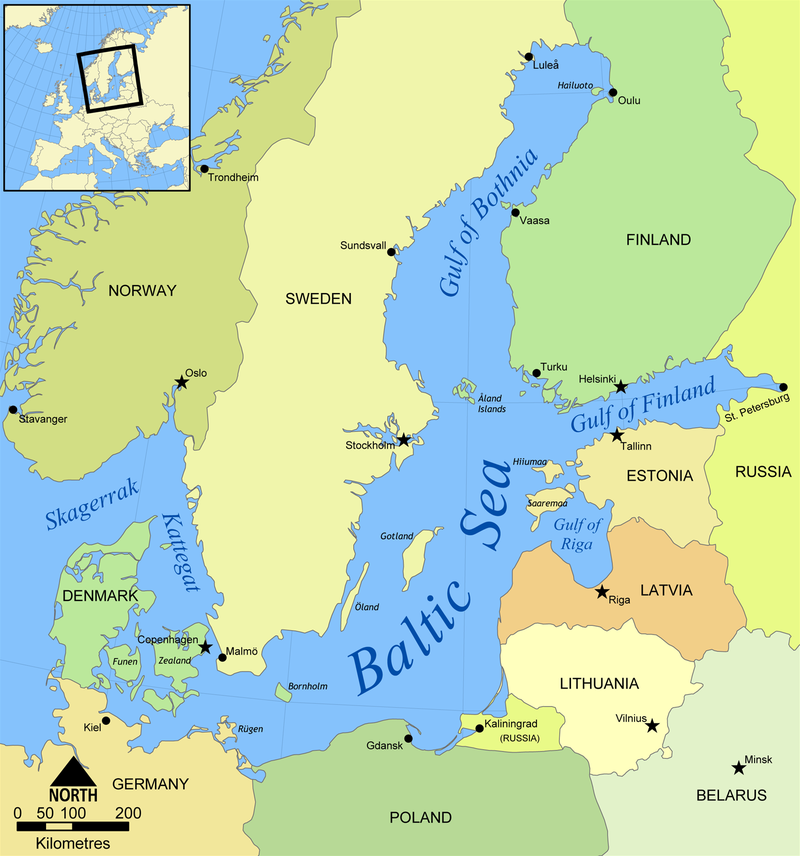 Map of the Baltic Sea  (Wikimedia.org.)

Peter I, the son of tsar Alexis of Russia, had been exiled from the Kremlin during the regency of his half-sister Sophia (1782 – 1789), by his half-brother Fyodor III (1676 – 1782). Contrary to his siblings, Peter was very healthy and played at war, organizing battles, with boys of lesser birth. (See Peter the Great, Britannica.) He also mingled with Moscow’s intellectually freer European citizens who “kindled” his interest in navigation and the mechanical arts. He shared his mother Natalya Kirillovna Naryshkina‘s progressive ideas. Peter founded the Russian Academy of Sciences in 1724.

Peter is associated with the Northern War, the Russo-Turkish Wars, the Persian War and numerous conflicts. (See Peter the Great), Britannica.)

Britannica Video on Catherine the Great

He was extremely neurotic, rebellious, obstinate, perhaps impotent, nearly alcoholic, and, most seriously, a fanatical worshipper of Frederick II of Prussia, the foe of the empress Elizabeth [Peter I’s successor].

Catherine therefore resolved to become Empress of Russia. She relinquished her name, Sophie, and learned Russian. By marriage, she belonged to the House of Romanov, the ruling house of Russia, but her mother was Princess Johanna Elisabeth of Holstein-Gottorp. Although Catherine had lovers before she became Empress, it seems that she bore Peter III at least one child, a Romanov, who would reign as Paul I of Russia (1796 – 1801).

It was easy for Catherine, with the help of the senators, high officials, and officers of the guard regiments (led by her lover Grigory Orlov and his brothers), to overthrow Peter on June 28 (July 9, New Style), 1762. Thus began the long and important reign of Catherine II, whom her admiring contemporaries named ‘the Great.’

This was a coup d’état. Peter III had to abdicate and was assassinated eight days later. We cannot ascertain that Catherine played a role in Peter III’s assassination. At any rate, Peter III had blemished his image by disengaging a victorious Russia from the Seven Years War against Prussia. However, before Peter III‘s death on 17 July 1762, he and Catherine II issued a Manifesto on Freedom of the Nobility, which “freed Russian nobles from compulsory military or state service.” (See Catherine II the Great, Wiki2.org.) As noted in an earlier post, in 1774, twelve years after Peter III’s assassination, Catherine may have married Grigory Potemkin, who also played a public role during the reign of Catherine II. (See Catherine II (the Great), Britannica.)

Would that Catherine II had abolished serfdom. She planned to do so, but didn’t. Catherine owned serfs and gave serfs to former lovers. But it should be noted that during most, nearly all, of Catherine the Great’s reign (1729 – 1796), slavery had not been abolished. Nor had serfdom been repressed in France and other European countries. (See History of Serfdom, Wiki2.org.) Scandinavian countries were an exception. They had no serfs, but several European monarchs profited from the slave-trade. In Russia, serfdom was abolished in 1861, under Tsar Alexander II (29 April 1818 – 13 March 1881).

Catherine did not frame a constitution, but Catherine’s Instruction could be considered a draft of this constitution, or its white paper.

1794 portrait of Catherine, age approximately 65, with the Chesme Column in the background, by V. Borovikovsky (Tretyakov Gallery) (Photo credit: Wiki2.org.)

The French Enlightenment & the French Revolution

Catherine admired Montesquieu and Rousseau. As we have seen, she bought Denis Diderot‘s library, making him its custodian for the rest of his life. Moreover, she and Voltaire shared letters. Despots, however, fear the people they control, and their fear leads them to control even more. After the terror Yemelyan Pugachov‘s Cossack troops inspired in 1774, Catherine was afraid.

Catherine now realized that for her the people were more to be feared than pitied, and that, rather than freeing them, she must tighten their bonds.

Catherine, like all the crowned heads of Europe, felt seriously threatened by the French Revolution. The divine right of royalty and the aristocracy was being questioned, and Catherine, although a ‘friend of the Enlightenment,’ had no intention of relinquishing her own privileges: ‘I am an aristocrat, it is my profession.’

But Catherine was born, rather than elected, to privilege.

Despots they were. But Peter the Great and Catherine II (the Great), Peter in particular, enlarged Russia considerably, as the third map above indicates (See Digital Collection). They also organized Russia. Catherine II created several towns and promoted intellectual and cultural growth. As noted above, Peter’s model had been Europe, but France was Catherine’s chief model. However, the execution, by guillotine, of French King Louis XVI dampened Catherine’s admiration for France. Louis XVI was a fellow aristocrat by profession, as Catherine saw aristocrats. She was then approaching her own sudden death.

France and Europe may have been Peter I and Catherine II’s models. But our two enlightened despots’ leadership may also be considered a model.