Nikolai Rimsky-Korsakov (18 March 1844, near Novgorod – 21 June  1908) was one of the The Five and not the least. We know him as the composer of the Russian Easter Festival Overture. 🎶 Easter is/was a very important feast in Russia. You may have seen painted Russian eggs and a few of the 50 jewelled “Imperial” eggs Fabergé created for the Tsar’s family.

Rimsky-Korsakov was/is the most scholarly member of The Five and, consequently, their editor, Mussorgsky’s editor mainly. However, although his music exemplifies The Five’s attempt to express the Slavic roots of Russia’s music, he infuses into the music of Russia the sophisticated polyphony of European music, developed over centuries. Conversely, Russian music, the music of The Five and other Russian composers, would have a very real and important impact on western music.

Nijinsky in Scheherazade by George Barbier

Scheherazade “combines two features typical of Russian music and of Rimsky-Korsakov in particular: dazzling, colorful orchestration and an interest in the East, which figured greatly in the history of Imperial Russia, as well as orientalism in general.” (See Scheherazade, Wiki2.org.)

“American music critic and journalist Harold C. Schonberg wrote that the operas “open up a delightful new world, the world of the Russian East, the world of supernaturalism and the exotic, the world of Slavic pantheism and vanished races. Genuine poetry suffuses them, and they are scored with brilliance and resource.” (See Nikolai Rimsky-Korsakov, Wiki2.org.)

The quotations above point to the exotic nature of the music of the Slavic composers,  The Five: the Russian East. We have heard Alexander Borodin‘s In the Steppes of Central Asia (Mongolia). 🎶 Russia reaches from Europe to the Orient. The Five used folktales, a characteristic of 19th-century music and literature. These tales, many are fairy tales, were not necessarily Russian – Scheherazade isn’t, but they were the Russian expression of tales that overrode nationalism and belonged to a very distant past, millennia. Rimsky-Korsakov put his superior knowledge of orchestration, polyphony, blending many voices (soprano, alto, tenor, bass), into the service of a local idiom.

Besides, although the Slavic composers attempted to express the Slavic and exotic aspects of the music of Russia, Romanticism, a 19th-century movement, was characterized by a degree of exoticism. Rimsky-Korsakov composed Capriccio Espagnol, 🎶 and Victor Hugo (1802 – 1885) wrote the poem Les Djinns, published in his 1829 collection of poems, entitled Les Orientales. Yet, Hugo also wrote The Hunchback of Notre-Dame (Notre-Dame de Paris), published in 1831, locating France in the Middle Ages, which he considered a more genuine and national past, than the plays of Jean Racine (1639 – 1699). He also modified the alexandrine, the “noble” twelve-syllable verse borrowed from the 12th-century French Roman d’Alexandre, featuring Alexander the Great, king of Macedonia. As well, Hugo ensconced French literature into Gothic fiction, a characteristic of Romanticism.

The Russian military clipper Almaz in New York Harbor in 1863. Rimsky-Korsakov served as a midshipman on this ship and later wrote about this cruise. (Photo and caption credit: Wiki2.org.)

A Musical Career & a Naval Career

Rimsky-Korsakov (1844 -1908) had a passion for the sea, which he had yet to see when he joined the Imperial Russian Navy. But his older brother, Voin Rimsky-Korsakov (1822 – 1871), had travelled to lands far away. Voin graduated from the School for Mathematical and Navigational Sciences in Saint Petersburg, and so would Nicolai who admired his brother. However, Nicolai would combine two careers. He would be a naval officer and a composer, and, as a musician, he would introduce the Russian East into European music. That would be his gift to classical music. As we have noted in posts about enlightened despots, Russia looked to Europe. Rimsky-Korsakov and other Russian composers, The Five, are less European than Tchaikovsky, but they composed music where east and west interact.

In 1873, Rimsky-Korsakov “assumed charge of military bands as inspector and conductor. He therefore left the naval service.” (See Britannica.)

Henceforth, Nicolai Rimsky-Korsakov would be a teacher of composition (1 & 2) and a conductor (3 & 4):

We have noted that Rimsky-Korsakov differed from other members of The Five, and must note it again. Rimsky-Korsakov was very interested in the study of harmony, counterpoint, and orchestration. He delved into the European tradition, a rich tradition we can trace back to the Middle Ages. That would be his gift to The Five. Polyphony unfolded over centuries of liturgical and secular (the Madrigal and songs) compositions:

“Eager to complete his own musical education, he undertook in 1873 an ambitious program of study, concentrating mainly on counterpoint and the fugue. He ended his studies in 1875 by sending 10 fugues to Tchaikovsky, who declared them impeccable.”[1]

On 2 March 1874, Rimsky-Korsakov conducted the first performance of his Symphony No. 3. That same year, “he was appointed director of the Free Music School in St. Petersburg, a post that he held until 1881.”[2]

By turning to European music, Rimsky-Kosarkok’s relationship with the four of Slavic composers became that of editor. Had he not revised and enriched Mussorgsky’s opera Khovanshchina, it may no longer be performed. We have heard at least one segment of the introduction to Khovanshchina. Dawn over the Moscow River 🎶 is magnificent. One could suspect that Rimsky-Korsakov’s editing miffed his colleagues. I doubt it. He may be best described as a big brother to brilliant composers who were less learned than he was.

Writers often need a good editor, and the same is true of musicians. Rimsky-Korsakov would not have edited Mussorgsky, had Mussorgky’s music not been the product of a genius.

“In 1889 he [Rimsky-Korsakov] led concerts of Russian music at the Paris World Exposition, and in the spring of 1907 he conducted in Paris two Russian historic concerts in connection with Serge Diaghilev’s Ballets Russes.”[3]

Russian composers are specialists in the composition of music for ballet and for opera. Their music is “programmatic,”  in that it has a narrative. It therefore differs from “absolute music,” a non-representional form of music. Russian composers also love rhapsodies and contrasts. The programmatic pieces to which I have referred constitute Rimsky-Korsakov’s best-known compositions and they blend the Russian East and the fine polyphony of the European West. Favourites are:

Other favourites are The Tale of Tsar Saltan, Sadko, The Snow Maiden (1882) and other folktales and tales.

But I have selected his Procession of the Nobles as today’s choice. Rimsky-Korsakov was a member of the nobility. 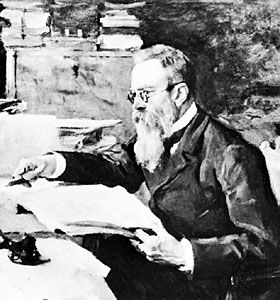 Nikolay Rimsky-Korsakov, detail of a portrait by V. A. Serov; in the Tretyakov Gallery, Moscow.
H. Roger-Viollet [4]