WASHINGTON, DC – FEBRUARY 04: U.S. President Barack Obama meets with a group of ‘DREAMers’ who have received Deferred Action for Childhood Arrivals in the Oval Office of the White House February 4, 2015 in Washington, DC. ‘DREAMers’ are children who were brought into the U.S. illegally and were then granted temporary relief under Obama’s 2012 Deferred Action for Childhood Arrivals program. (Photo by Win McNamee/Getty Images)

The above photograph features DREAMers or beneficiaries of DACA, the Deferred Action for Childhood Arrivals.

President Trump plans to deport immigrants who arrived in the United States as minors. The Deferred Action for Childhood Arrivals is a policy of the Obama administration  adopted in June 2012 and rescinded by the Trump administration in September 2017 (See Deferred Action for Childhood Arrivals, Wikipedia.) DACA beneficiaries received a renewable two-year period of deferred action from deportation and were eligible for a work permit.

DACA is rooted in the DREAM Act (acronym for Development, Relief, and Education for Alien Minors Act)

“The bill was first introduced in the Senate on August 1, 2001, S. 1291 by United States Senators Dick Durbin (D– Illinois) and Orrin Hatch (R– Utah), and has since been reintroduced several times (see Legislative history) but has failed to pass.” (See DREAM Act, Wikipedia.) 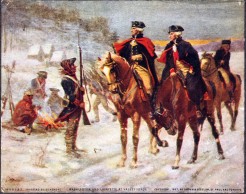 Lafayette and Washington at Valley Forge 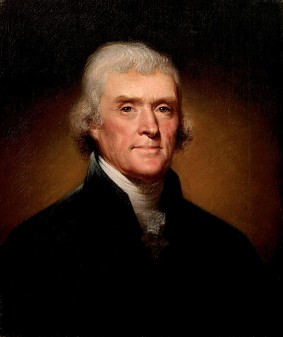 We hold these truths to be self-evident, that all men are created equal, that they are endowed by their Creator with certain unalienable Rights, that among these are Life, Liberty and the pursuit of Happiness.

If one reads the Declaration of Independence, quoted above, without taking its historical context into consideration, one cannot reconcile the phrase “all men are created equal,” with enslavement. Matters are all the more puzzling since, as Minister to France (1784 -1789), Thomas Jefferson helped the Marquis de Lafayette draft the French Declaration of the Rights of Man and of the Citizen (1789), a monument to social justice drawing from the American Declaration of Independence. La Fayette had fought in the American Revolutionary War. Could it be that the Founding Fathers, especially Thomas Jefferson, were hypocrites? I have pondered this question and it would be my opinion that, in their eyes, black slaves were not fully developed men. The Founding Fathers: George Washington, John Adams, Alexander Hamilton, John Jay, Thomas Jefferson, James Madison wished to create a union of white men. George Washington, the 1st President of the United States and Commander-in-Chief of the Continental Army, was a Mason and a slave owner, but did he know that blacks were human beings to the same extent as whites?

Thomas Jefferson is unlikely ever to have whipped his slaves, but I doubt that his attitude towards the blacks was substantially different from the view expressed, a century later, by Confederate General-in-Chief, Robert E. Lee’s (19 January 1807 – 12 October 1870)

“most noted comment, quoted by most Lee’s biographers, occurred in a [sic] 1856 letter to his wife, describing slavery as an evil institution, but one that had more adverse effects on whites than blacks. However, he viewed slavery as a “painful discipline” which elevated blacks from barbarism to civilization while introducing them to Christianity. He felt that the institution would come to an end in God’s good time, but that might not be soon.” (See Robert E. Lee, Wikipedia.)

In the White Man’s Burden, a poem published as the 19th century drew to an end, in 1899), Rudyard Kipling (30 December 1865 – 18 January 1936) expressed views that portrayed the inhabitants of colonies as “primitive:”

“The implication, of course, was that the Empire existed not for the benefit — economic or strategic or otherwise — of Britain, itself, but in order that primitive peoples, incapable of self-government, could, with British guidance, eventually become civilized (and Christianized).” (See The White Man’s Burden, Wikipedia.)

Rudyard Kipling is the author of the Jungle Book (1894) and the Just-so stories (1902), classics of children’s literature. As for Lafayette, although he was an abolitionist and a Mason, he fought in the American Revolutionary War and probably realized that George Washington and other Founding Fathers of the United States could not be brought to view their black slaves as altogether human or “men,” but that they were good human beings.  The United States Declaration of Independence was worded in the language of John Locke (29 August 1632 – 28 October 1704) and also reflected Freemasonry. Equality would be the subject matter of Jean-Jacques Rousseau’s (28 June 1712 – 2 July 1778)  Discourse on Inequality (1754) and a main theme in Rousseau’s Social Contract (1762). These documents are “cornerstones in modern political and social thought.” 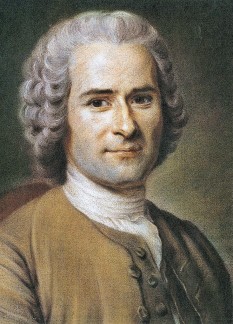 The case of Dred Scott is most revealing. In 1857, Dred Scott, a slave taken to free states by his owners, sued for his freedom and lost. Dred Scott vs Sandford  60 U.S  393 is considered one of the worst mistakes of the Supreme Court of the United States. Its decision was made shortly before the American Civil War (1861-1865) and it proved to be an indirect catalyst for the American Civil War.” (See Dred Scott vs Sandford 60 U.S.393.)

The Naturalization Act of 1798 was repealed by Thomas Jefferson and replaced by the Naturalization Law of 1802, which reduced the residence requirement of immigrants from 14 years to 5 years, as it had been under the terms of the Naturalization Act of 1795.  However, the Alien Enemies Act, was used after Pearl Harbor was attacked, on 7 December 1941. The Alien Enemies Act of 1798 would allow President Franklin Delano Roosevelt “to imprison Japanese, German, and Italian aliens during World War II.” Canadians followed Franklin Delano Roosevelt and also interned Japanese Canadians. (See Internment of Japanese Canadians.) The Alien Enemies Act was also used by President Harry S. Truman “to continue to imprison, then deport, aliens of the formerly hostile nations.” It has been revised but remains in effect. The Alien Friends’ Act and the Sedition Act went into dormancy. A modified Alien Enemy Act is still in force.

“The Sedition Act resulted in the prosecution and conviction of many Jeffersonian newspaper owners who disagreed with the government.” (See Alien and Sedition Acts, Wikipedia.)

The Chinese Exclusion Act of 6 May 1882 is particularly sad, and the United States was not the only country in which the Chinese were viewed as a peril, the Yellow Peril. It was the first American federal law prohibiting the immigration of Chinese laborers. Chinese had first emigrated to the United States during the California gold rush (1848-1855). Later, in the 1860s, they were employed to build the First Transcontinental Railroad from Nebraska to the Pacific Ocean. The Burlingame Treaty, signed in Washington (1868) and ratified in Beijing (1868), granted the Chinese equality with Americans. Yet, on 24 October 1871, 500 rioters entered Los Angeles’ Chinatown “to attack, rob and murder Chinese residents of the city.” Rioters “tortured and then hanged” 17 to 20 Chinese. The Massacre was “racially motivated,” and “it took place on Calle de los Negros (Street of the Negros), also referred to as ‘Nigger Alley.’ “It was the largest mass lynching in American history.” (See Chinese Massacre of 1871, Wikipedia.)

The Yellow Terror in all His Glory (1899) is a rebellious Qing Dynasty Chinese man, armed to the teeth, who stands astride a fallen white woman representing Western European colonialism (Photo credit: Wikipedia)

French aristocrat Arthur de Gobineau, the author of the Essai sur l’inégalité des races (The Essay on the Inequality of  Human Races, c. 1848), feared the Yellow Peril above all. As we have seen, he developed the theory of the Aryan master race, but he was not an anti-Semite.

As biology, botany, ethnology, and related disciplines developed, the matter of racial superiority or inferiority among races started to lose its grip. The findings of English naturalist, geologist and biologist Charles Darwin (12 February 1809 – 19 April 1882) were a revolution. According to Darwin’s On the Origin of Species, published in 1859, two years after the Dred Scott vs Sandford, humans had evolved “through a process of natural selection.” (See Charles Darwin, Wikipedia.) Darwin’s views were controversial. Wasn’t man created by God? There is such a thing as Scientific Racism (see Wikipedia), but Darwin was not a racist.

Gilbert Motier de Lafayette was a very good friend of George Washington. He named one his sons after the 1st President of the United States. (See Georges Washington de La Fayette, Wikipedia.) Georges Washington de La Fayette, Lafayette’s son went to the United States during the French Revolution. He studied at Harvard and lived at the home of George Washington, and Americans did all they could to save the life of the Lafayette’s during the French Revolution. As for Thomas Jefferson, during his stay in France, just prior to the French Revolution, he was a distinguished guest at Lafayette’s home. Lafayette was an abolitionist and a Mason. He was a member of la Société des amis des Noirs  (The Society of Friends of the Blacks). In a letter to George Washington, written in 1783, “he urged the emancipation of slaves and their establishment as tenant farmers.” (See Gilbert Motier de Lafayette, Wikipedia.) He bought land in the French colony of Cayenne to “experiment.” However, there was little he could to do to change the embedded mindset of his American friends. Slavery had long been looked upon as morally acceptable, the slaves were blacks, an inferior race, and one did not have to pay slaves.

I prefer to think that ethnicity is not a factor in the Trump administration’s decision to deport DACA beneficiaries. But what about immigrants from the Near to Middle East. They may have pale skin, but ethnicity might deprive them of a home.

In a letter to his wife Adrienne, Lafayette wrote:

“The welfare of America is bound closely to the welfare of all humanity. She [America] is to become the honored and safe asylum of liberty! Adieu! Darkness does not suffer me to continue longer. But if my fingers were to follow my heart, I should need no daylight to tell you how I suffer far away from you, and how I love you.” (See Adrienne de La Fayette, Wikipedia.)

When Lafayette was in United States, it was a country in the making, a project. And it is still a project. It took a long time to accept African-Americans as citizens of America. As for DACA, Mr Trump might change his mind and not deport them. President Trump wants to reverse every decision made by the Obama administration. The Affordable Care Act is his main target.

In all likelihood the Founding Fathers believed that “all men were created equal,” but they lived in an age when humans looked upon the blacks and American Indians as inferior to white men. Matters have changed. The United States is now or should be “the honored and safe asylum of liberty!”