Mr Romney made it perfectly clear that, under his presidency, the United States would stand behind Israel.  One cannot object to his standing behind Israel, but can he play favorites, thereby alienating the Arab world?  If Mr Romney plays favorites or takes sides, the United States will remain an enemy in the eyes of other countries in the Near and Middle East.  As a result, he would not be protecting but endangering Israel.

Moreover, by taking sides, he would endanger the United States.  The events of 9/11 and the disastrous wars fought in the wake of these attacks dictate prudence in the Middle East.  There are countries in the Arab world that harbor considerable ill feelings against the United States.

“That’s why on day one, I will label them a currency manipulator, which allows us to apply tariffs where they’re taking jobs. They’re stealing our intellectual property, our patents, our designs, our technology, hacking into our computers, counterfeiting our goods.” (Mitt Romney)

The United States borrowed a great deal of money from China and may need to borrow more.  If Mr Romney and other very wealthy Americans will not pay their fair share of taxes, if they deposit their money in offshore accounts, if they continue to expect tax cuts, if they export too large a number of jobs to China and other countries, thereby taking jobs away from Americans and, by the same token, depriving the US of tax-payers, how will the debt be repaid?  Mr Romney may have to learn Chinese.

In short, Mr Romney is fomenting dissent in the Middle East and inviting retaliatory action from China.  His behaviour suggests that he would be a reckless President and that as President of the United States, he would not give sufficient attention to domestic issues.  He would in fact bully the world: sanctions here, sanctions there.

Contrary to Mr Romney, President Obama’s main concern is for the safety of his people.  For instance, he stated that:

President Obama is right.  It is in America’s national interest to make sure than Iran and other countries do not get nuclear weapons.  This matter is, in fact, a global issue and should be addressed as such.

President Obama also stated that “[t]hey [Egypt] have to abide by their treaty with Israel. That is a red line for us, because not only is Israel’s security at stake, but our security is at stake if that unravels.”

America remains the one indispensable nation. And the world needs a strong  America, and it is stronger now than when I came into office.

English: President Obama had called on the two former Presidents to help. During their public remarks in the Rose Garden, President Clinton had said about President Bush, ‘I’ve already figured out how I can get him to do some things that he didn’t sign on for.’ Later, back in the Oval, President Bush is jokingly asking President Clinton what were those things he had in mind. (Photo credit: Wikipedia)

Yes the United States “remains the one indispensable nation,” but a nation where a social contract, albeit tacit, dictates that its president’s main concern be the “safety” of his nation.  That notion has to inform a president’s actions and any candidate to the presidency of the United States who expresses views that stray from this tenet does not seem a suitable candidate.

So the United States now knows that if it elects Mr Romney, it may well elect a warmonger who is indeed prepared to barge into other countries thoughtlessly and will revive the image of the “ugly American:”  a “pejorative term used to refer to perceptions of loud, arrogant, demeaning, thoughtless and ethnocentric behavior of American citizens mainly abroad, but also at home.  Although the term is usually associated with or applied to travelers and tourists, it also applies to US corporate businesses in the international arena.” (Ugly American, Wikipedia)

After four years of careful negotiations with the Middle East and a rapprochement, America might again be sending soldiers into battle, young Americans who will lose their life or whose life may be ruined. 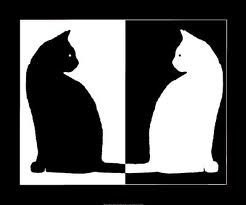 Belaud in black and white

My computer needs adjustments.  According to my cat Belaud, the problem is with the mouse.  The mouse is making the cursor move around rapidly and erase entire paragraphs.  I will call a computer specialist.

Moreover, according to Belaud, there is a degree of rivalry between my computer and WordPress.  Both have a mind of their own.  Belaud tells me that WordPress saves my drafts and when the time comes to push the button, the publish button, it has to make a choice between drafts and leaves drafts behind.  I try to log out, but a window pops up informing me not to “leave this page.”  So I edit the page, in the belief that something has gone wrong.

Belaud the cat tells me not to worry.  If I take action prematurely, says he, there could be dire consequences.  He suggests a diplomatic approach to solving this problem and  also warns never to publish a text in the evening.  Belaud informs me that evenings are to be dedicated to household pets and to rest.  Besides he reminds me that I am, at the best of times, a very tired person and should wait until morning before doing anything as drastic as clicking on a publish button.

This is, of course, cheap psychology on Belaud’s part, but given his noble origins and assertive personality, I cannot ignore his caveats.  But I believe he is going too far by stating that I am “in denial.”  I have told him that it isn’t denial but perseverance and a wish to belong.

At any rate, I will, at some later point, insert the word Camerata in my last blog, but for the time being, I am being sent to the dog house to reflect on the human condition in general and my fallability in particular.

I will therefore call a computer specialist and then serve my sentence: twenty-four hours in the dog house.  But I will rise again.

Take good care of yourselves.