In an earlier post on Molière‘s Dom Juan, which was first performed on 15 February 1665, I mentioned sources: Tirso de Molina‘s Trickster of Seville, the Stone Guest (1630) and the dramma giocoso. I also wrote that he was a descendant of Bergamo’s Brighella. Finally, I mentioned that Mozart had written an opera on our legendary figure: Don Giovanni (K. 527) and catalogued it as an opera buffa, a dramma giocoso. Mozart’s Don Giovanni is the most famous Don Juan. Mozart’s librettist was Lorenzo da Ponte.

Dom Juan features a duel. Ironically, Pushkin was killed in a duel. He was fatally wounded and died of peritonitis two days later, on 29 January 1837.

The full title of Mozart’s Don Giovanni is The Rake punished or Don Giovanni. The complete title of Molière’s Dom Juan is Dom Juan ou Le Festin de pierre. The rake is an aristocrat and Sganarelle describes his master as a “grand seigneur méchant homme” (I. i , p. 4), a “great lord become an evil man.” (I. 1, p. 3). (Sganarelle to Gusman). If one cannot be a misanthrope and love Célimène, a mondaine, can one be a Great Lord and an evil man? Molière’s Alceste (The Misanthrope) and his Dom Juan are incongruous characters.

Here is our dramatis personæ

The plot of Dom Juan differs from the classic “blondin berne le barbon” (the young man fools the old man). There are no young lovers opposing a senex iratus. But Dom Juan is a miles gloriosus. (See Alazṓn,Wiki2.org.) He meets two peasant-girls, Mathurine and Charlotte. He fancies Mathurine, but as soon as he sees Charlotte, he has a change of heart. Dom Juan’s fickleness leads to a quiproquo (a misundertanding) that provides comic relief, but he has fooled the girls and he has abandoned a wife, Done Elvire. His behaviour is not mere fickleness, it is defiance. Done Elvire’s brothers, Dom Carlos and Dom Alonze are roaming the land looking for Dom Juan and intending vengeance. Moreover, Dom Juan has killed the Commandeur and returned from exile, infringing a code of laws.

It should be noted that Sganarelle describes Dom Juan as a pèlerin, a pilgrim, which suggests that the Grand Seigneur may be moving from place to place. The play has a picaresque flavour. The picaresque is usually associated with novels that feature rogues rather than aristocrats, and Grands Seigneurs at that.

Yet, the play consists of a series of scenes where Dom Juan encounters persons who warn him that his defiance will not go unpunished. These somewhat loosely connected scenes depict an inferior Dom Juan, courting peasant-girls, etc. who ends up feigning devotion to give himself impunity. This may seem a lame plot.

However, comedy has many formulas, one of which is the farcical trompeur trompé, the deceiver deceived. If the society of the play cannot get the better of a bombastic Dom Juan, God can and does. It may be used sparingly as a theatrical device, but Dom Juan’s dénouement is a deus ex machina, a heavenly salvation.

After the initial exchange between Gusman and Sganarelle, Sganarelle confirms Dom Juan’s suspicion that Sganarelle was speaking with Gusman, horseman to Done Elvire. The third scene of act one, is a conversation with Done Elvire and Dom Juan. Done Elvire does not convince Dom Juan that he has obligations. Marriage is a sacrament and Done Elvire is in love. Would that Dom Juan were lying:

Que ne me jurez-vous que vous êtes toujours dans les mêmes sentiments pour moi, que vous m’aimez toujours avec une ardeur sans égale, et que rien n’est capable de vous détacher de moi que la mort!
Done Elvire à Dom Juan (I. iii, p. 12)
[Why not say to me that affairs of ultimate consequence have obliged you to leave without your telling me; that you must, against your wishes, stay here for some small indefinite time, and that I have only to return from whence I came, in the assurance that you will follow my steps as soon as possible; that you burn to rejoin me, and that separated from me, you suffer what a body suffers when severed from its soul? This is how you should defend yourself, and not stutter and stammer as you do now.]
Done Elvire to Dom Juan (I. 3, p. 10)

His response is that he took her from a convent and that marrying her was sinful. His marriage was a transgression. He offended God Himself .

The first scenes of Act II are his encounters with Charlotte and Mathurine and a would-be husband to Charlotte, Pierrot. Pierrot has just saved Dom Juan who nearly drowned. Scene 4 is a lovely quiproquo. Both peasant-girls claim that Dom Juan will marry her, so Dom Juan walks back and forth, whispering lies to each peasant-girl.

At the end of act two, La Ramée warns Dom Juan that twelve men are looking for him. This is how he parts with the peasant girls. But he asks Sganarelle to wear his clothes:

In Act III, Dom Juan meets a beggar who does not want money from him, but he is given money “out of love for humanity,” because he sees one man attacked by three. He doesn’t know the man is one of Done Elvire’s brothers.

Va, va, je te le donne pour l’amour de l’humanité, mais que vois-je là? Un homme attaqué par trois autres? La partie est trop inégale, et je ne dois pas souffrir cette lâcheté.
Dom Juan au Pauvre (III. ii, p. 39)
[Take it anyway, then. I give it to you out of love for humanity. But what do I see over there? One man attacked by three? The match is too lopsided, and I cannot allow such baseness.]
Dom Juan to the Beggar (III. 2, p. 34)

This episode buys him time. They want revenge, but aristocratic rules prevail.

Je sais la différence, mon frère, qu’un gentilhomme doit mettre entre l’un et l’autre, et la reconnaissance de l’obligation n’efface point en moi le ressentiment de l’injure : mais souffrez que je lui rende ici ce qu’il m’a prêté, que je m’acquitte sur-le-champ de la vie que je lui dois par un délai de notre vengeance, et lui laisse la liberté de jouir durant quelques jours du fruit de son bienfait.
Dom Carlos à son frère (III. iv, p. 43)
[I know the distinction, my brother, that a gentleman always makes between the one and the other, and my recognition of the obligation does not annul in me all the resentment of the injury; but allow me to render to him here what he has loaned to me, that I acquit myself of the life that I owe him, by offering a delay in our vengeance, and leaving him the liberty to enjoy, for several hours, some fruit from his fine deed.]
Dom Carlos to his brothers (III. 4, p. 37)

In scene four, Dom Juan asks Sganarelle to speak to the statue of the Commander. The statue lowers its head.

In Act IV, Scene three, Dom Juan speaks with Monsieur Dimanche. He owes him money. Dom Juan is a superb host, but he does not pay his debt.

Apprenez enfin qu’un gentilhomme qui vit mal, est un monstre dans la nature, que la vertu est le premier titre de noblesse, que je regarde bien moins au nom qu’on signe, qu’aux actions qu’on fait, et que je ferais plus d’état du fils d’un crocheteur, qui serait honnête homme, que du fils d’un monarque qui vivrait comme vous.
Dom Louis à Dom Juan (IV. iv, pp. 55-56)
“Learn that a gentleman who lives in evil habits is a monster of nature, that virtue is the first title of nobility, and that I consider far less the name that one signs than the actions one has done, and that I would prefer to be the son of a weaver who was an honorable man, than the son of a monarch who lives as you do.”
Dom Louis to Dom Juan (IV. 4, p. 49)

After Dom Louis has spoken, Dom Juan offers him a seat. Dom Juan has not heard Dom Louis. When Dom Louis leaves and is barely out of hearing distance, Dom Juan tells him to die as soon as possible. (IV iv, p. 56) (IV.iv, p. 50.) In Scene six, Dom Juan speaks with Don Elvire very politely once again. Once again, he sees, but he does not hear. When she has left, Dom Juan tells Sganarelle that he was moved:

Sais-tu bien que j’ai encore senti quelque peu d’émotion pour elle …
Dom Juan à Sganarelle (IV. vii, p. 59)
[You know I think I felt a little glimmer of emotion for her, and even found something rather pleasurable in this new extravagance. Her careless clothes, languishing air and tears seemed to reawaken in me a few embers of a doused fire.]
Dom Juan to Sganarelle (IV. 7, p. 52)

In the last scene of Act IV (Scene eight), the Statue has arrived for dinner.

By Act V, Dom Juan is a faux-dévot. His father is extremely pleased, but Sganarelle knows the truth. Dom Carlos comes to avenge his sister. Dom Juan/Tartuffe repeats that the real transgression was to remove Done Elvire from a convent. (V.iii). In Scene five, a ghost arrives. Dom Juan will not repent:

Sganarelle is precious. After so many years of service, he has lost his living. So he says: « Mes gages ! mes gages! » (V.vi)

Thunder resounds and great lightning-bolts surround Don Juan; the earth opens and takes him; and he exits in the great flames burning where he has fallen.

“Ah! My pay! My pay! Look at that, everyone satisfied with his death! Offended Heaven, violated laws, seduced daughters, dishonored families, outraged relatives, mistreated women, husbands pushed to the limit, everyone is content: no one is miserable but me, who, after so many years of service, have no other gratification than to see with my own eyes the impiety of my master chastised by the most horrible punishment in the world. My pay! My pay! My pay!”
Sganarelle (V.6, p. 62)

Dom Juan is probably the most enigmatic of Molière’s comedies. We do not see the traditional young lovers, engaged in a struggle (the agon). Dom Juan is a miles gloriosus or alazṓn, but he is not a convincing blocking character. As for the eirôn, it may be collective figure. We see a defiant and handsome aristocrat who flaunts every rule and believes he can get away with every transgression. His defiance has a metaphysical dimension. He thinks that he and God can sort everything out between themselves. From the beginning of the play, he trivializes God.

“That’s enough. It’s an issue between Heaven and me, and we get along just fine without you bothering yourself about it.” (I.ii, p. 7)

However, the statue leads him to a fiery abyss.

Dom Juan is un homme méchant, not a Grand Seigneur. But, as noted above, heaven strikes. 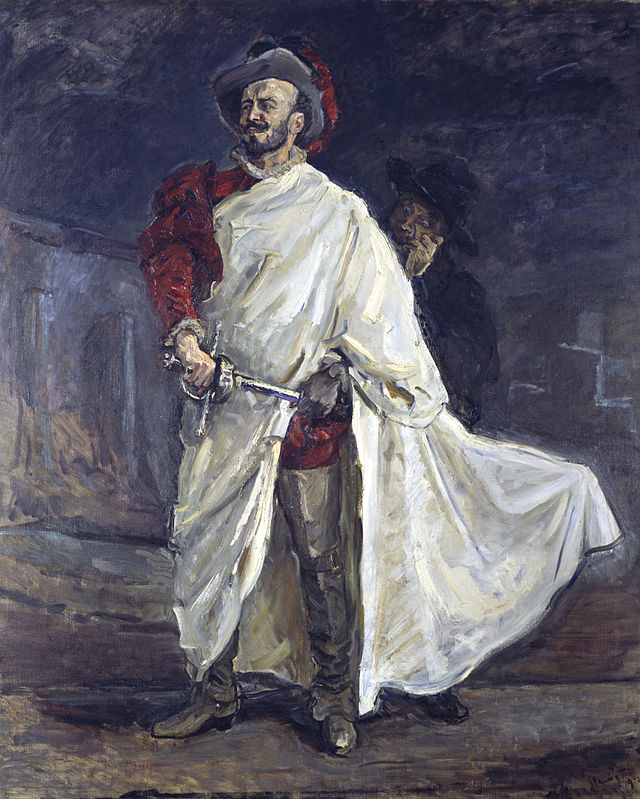