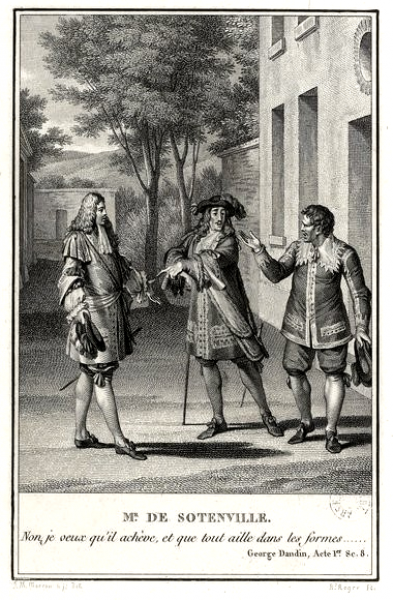 I found an anecdote in a book on Molière published by Paris-Match. Boileau, a key figure in the development of the French language and literature, was asked by Louis XIV to identify the greatest writer of his reign. Boileau said that it was Molière. Louis was surprised, but he told Boileau that he, Boileau, was in a better position to judge.

Quel a été le plus grand écrivain de mon règne? (Louis)
[Who was the greatest writer of my reign?]
C’est Molière. (Boileau)
[It’s Molière.]
Ma foi, je ne l’aurais pas cru. Mais, indubitablement, vous êtes meilleur juge que moi en la matière. (Louis)
[Is that so? I wouldn’t have thought so. But you are, undoubtedly, the better judge in this matter.]

I bought this book when I lived in France. It had just been published. It is not an academic presentation of Molière, but it is informative, accurate by 1969 standards, and it has illustrations I have not seen navigating the internet.

There are several procès (legal proceedings or trials) in Molière. In George Dandin, we are dealing with a contract, a marriage contract. All George Dandin knows is what Lubin, Valère’s valet, has told him. Angélique has received a letter from Clitandre. He is in love. Lubin takes the letter to Angélique who replies that she is very interested in Clitandre, but that he must be careful, because her husband is jealous.

Hearsay is not valid and aristocrats deny allegations credibly, or by way of being aristocrats: dans les formes. Dandin has a title. He is George de La Dandinière, but he will always be a peasant. As for Angélique, she will always say that he signed a contract with her family, and not with her. She had nothing to do in this matter, which is mostly accurate. As early as the end of Act One, Dandin has to apologize to the Sotenvilles and Clitandre. He repeats words dictated to him by Monsieur de la Sotenville.

With George Dandin, we move a little past cuckoldry. Dandin, a wealthy peasant, learns that his wife, Angélique, has a lover,[1] Clitandre, an aristocrat. Dandin believes this is proof of adultery or impending adultery, but it isn’t proof. The Sotenvilles, Angélique’s parents, would need to see Clitandre in bed with Angélique. But even if they did,  Clitandre might still get off, by denying. Dandin is a mere peasant.

Si bien donc que si je le trouvais couché avec ma femme, il en serait quitte pour se dédire.
Dandin aux Sotenvilles (I. vi, p. 15)
[Thus, if I had found him in bed with my wife, he would get off by simply denying it?]
Dandin to the Sotenvilles (I. 7, p. 262)

Aristocracy is a mask and Dandin was naïve and vain. Vanity is a sin. Dandin could not become a gentilhomme. He may as well drown. Although he is right, he is wrong.

George Dandin is not an “all’s well that ends well” scenario. George Dandin is a farce. The formula for farces is “tel est pris qui croyait prendre” or “deceiver deceived.” According to this comedic formula, Dandin will always complain and will always be forced to apologize.

With kind regards to everyone  💕