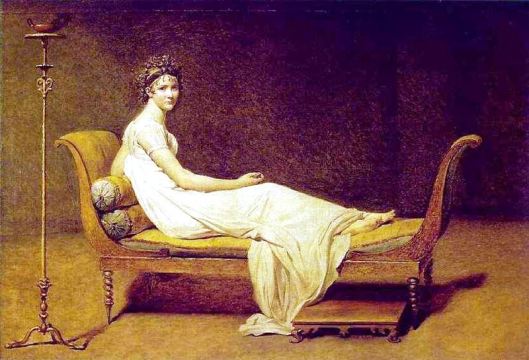 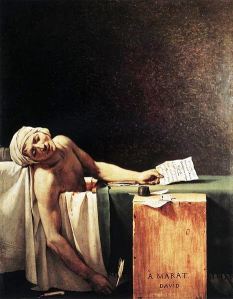 Yesterday, I published a post in which I noted that France had rebuilt promptly after one of the worst revolutions in recorded history: the French Revolution.  Although history can hurt humans, humans can often work their way out of catastrophic circumstances. One cannot bring the dead back to life, but we can recover from the economic hardship caused by wars.

The Death of Marat by Jacques-Louis David, 1793

Yet, in 1793, David had made a portrait of Jean-Paul Marat (24 May 1743 – 13 July 1793) lying in his bathtub, stabbed to death by Charlotte Corday or Marie-Anne Charlotte de Corday d’Armont (27 July 1768 – 17 July 1793 [death by guillotine]). His tub was the only place Marat, a medical doctor, could find relief from the discomfort of a debilitating skin disease, probably dermatitis herpetiformis.

Jacques-Louis David’s two portraits therefore attest to a form a resilience on the part of the French. France had not been bombed nor set ablaze, but it had to start anew and it did.

From France to the United States of America

Similarly, like the phoenix, the United States can rise from its own ashes. Two wars have left it panting…  but no plan such as the Marshall Plan, the Federal Aid Highway Act of 1956, or TARP is being approved. I must therefore conclude that man-made impediments are getting in the way of recovery.

The Marshall Plan and the Federal Aid Highway Act of 1956

Moreover, a few years later, President Eisenhower was allowed the money he needed to build the interstate highway system. Construction was authorized by the Federal Aid Highway Act of 1956 and the cost of construction was estimated at $425 billion making it, as I read in Wikipedia, the “largest public works program since the Pyramids.” (Richard F. Weingroff [see Wikipedia]).

In the 16 July 2012 issue of CNN Money, I read first that “[s]everal economists are now cutting their forecasts for second quarter growth closer to 1%,” which is called the Zombie economy. But as I scrolled down, I read that, according to Dean Croushore, chair of the economics department at the University of Richmond, “[h]iring isn’t falling off a cliff.” In fact, Professor Croushore says, “[i]t’s really been growing fairly slowly but steadily throughout.”

Scrolling down a little more, I read that according to Croushore  “[t]he fundamental problem is we had this financial crisis and a lot of people still haven’t recovered from that.” Crouchore also says that “[p]eople aren’t spending nearly as much as they used to and they’re not likely to spend a lot more until they’re out of financial trouble.”

That’s how we react. If one loses money and jobs are disappearing, one does not spend, yet spending is how we keep an economy functional. So the loss of jobs is a central issue, if not the central issue, not to mention that the government is cutting back benefits for the unemployed. The United States can and should provide the citizens of America with a comprehensive safety net.

As the above pictures indicate, France, a chaos in 1794, had been put together again by the early years of the nineteenth-century. So let me repeat that one can rise again.

Greed and prejudice. As painful as it is, I must suggest that unnecessary obstacles are being put in the way of the Obama administration, obstacles that are not new but are more obvious. These would be:

For an economy to be functional, it would be my opinion that

And it would also be my opinion that

Yet, there is money, but among the rich and infuential, too many persons are paying to make sure that those who are elected into office next November will provide the rich with tax cuts. Moreover, while jobs are disappearing, CEOs, president of banks and insurance companies, the wizards of Wall Street and others continue to give themselves gargantuan bonuses.

Remember that, in the fall of 2008, when the US economy was facing a crash, TARP was signed into law by George W. Bush on 3 October 2008. The impending crash required immediate remedial action and got immediate and bi-partisan remedial action. Yet, as the economy was crashing, the above-mentioned wizards of Wall Street, etc. collected their bonuses, thereby making a display of their greed and acting irresponsibly. There were exceptions, but…

In the fall of 2008, we had, on the one hand, the very rich who live in mansions, often own several luxury cars, a yacht or two or more, one for each coasts, and also own a plane, an apartment in Paris, one in London and one or two luxury condominiums in Canada, just in case…

But, on the other hand, we had families who could no longer put bread on the table and individuals who stood to lose their life savings! Had compassion and justice gone out of fashion? Good citizens attend to the collective needs of their nation. The wealthy seem to think that because they are doing well, so is everyone else. That is individualism run amuck and fuelled by greed.

Yes, greed and also prejudicial actions, such as voter expulsion. I listened to Governor Rick Scott of Florida explain that a voter purge was good. He was so unconvincing that he actually confirmed me in my suspicion that many, not all, Republicans are afraid persons of colour will vote for President Obama. They are afraid to the point of eliminating them as voters. So I have to repeat, after President Lyndon Baines Johnson in a speech on the 1965 Voting Rights Act, that[i]

[i]t is wrong – deadly wrong – to deny any of your fellow Americans the right to vote in this country.

One’s ethnicity is like one’s rank in society.  It is a mere accident of birth. We are all the same. Yet, it could be that ethnicity is related to the obstacles President Obama has faced from the day he was elected, the worst of which has been a tightening of the national purse when jobs need to be created and much fewer exported.

Given that a man of colour was voted into the office of President of the United States, it could be people are washing their hands and arguing that the nation has proven that it does not discriminate on the basis of ethnicity. But as you know, President Obama has experienced such difficulties in his efforts to attend to the needs of his people as to make the results of the 2008 Presidential Elections look like a token gesture. Why was the stimulus package he proposed not adopted?

As for yours truly, she remembers, that within six years of the French Revolution, Madame Récamier, Jeanne-Françoise Julie Adélaïde Bernard Récamier (4 December 1777 – 11 May 1849), posed wearing a high-waisted empire styles dress (see Empire silhouette high-waisted empire style dress (see Empire silhouette) leaning on her récamier, the name now given the piece of furniture she is sitting on. In my opinion, the lessons of history are a source of wisdom…

A wrong cannot correct a wrong, so not in a million years would I advocate punitive taxes, but people who have an income must pay their fair share of taxes and the amount of money levied from wealthy people should be higher than the amount of money paid by persons whose income is much lower.

But the concern of the day is that if the Marshall Plan was put into operation, the interstate highway Federal Aid Highway Act of 1956 approved, and TARP voted into law by President George W. Bush, why are jobs not created?  Why is the US not helping itself and not allowing its President to help his nation?  In light of previously daring remedial actions and given the voter purge, I sense that recovery may be very slow and that President Obama may be blamed for not doing what Congress has prevented him from doing due to… 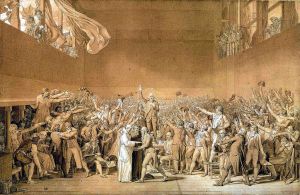 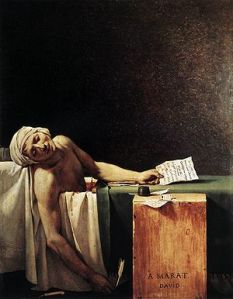 This is an election year in France (please click) and WordPress author “Becoming Madame” has published an essential post on the subject. I have to let you know about this post.

Jean-Paul Marat (24 May 1743 – 13 July 1793) was a “radical voice.” He escaped the guillotine, but was killed by Charlotte Corday on July 13, 1793. He was working in his bathtub where he found relief from a debilitating and itchy skin disease, probably dermatitis herpetiformis or Duhring’s disease, not caused by the herpes virus. 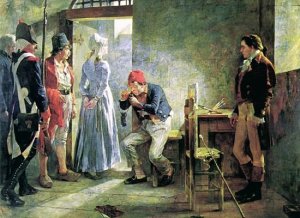