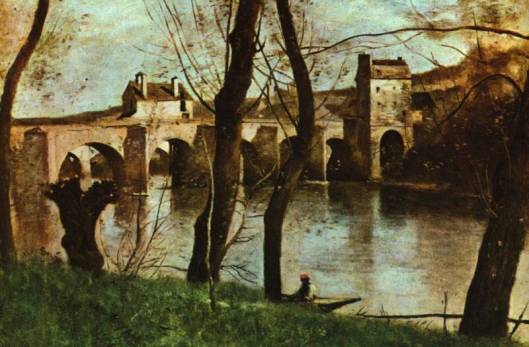 Woman with a Pearl, by Corot

I so love the colours he uses. Look at the water in Nantes.  He has created a patch of light by using a greenish blue with mauve hues.  It matches the sky.  Also note the serene ambiance and the discreet place he has given the little boat.

Among paintings, few have the monochrome quality of Corot’s “Woman with a Pearl.” And few portraits depict so beautiful a woman as Corot’s lady.  It may be that Corot saw the beauty of this woman’s soul and let it shape her face.

I hope you have a lovely weekend, filled with beauty. 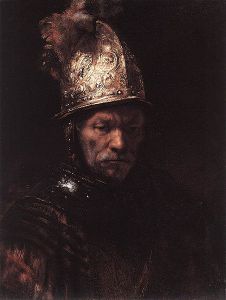 The Man with the Golden Helmet

In my post on Barbizon school artist, Charles Jacque, I mentioned not only the Golden section in a rather cavalier fashion, but I also mentioned chiaroscuro somewhat off-handedly.

According to Wikipedia “[c]hiaroscuro originated during the Renaissance as drawing on coloured paper, where the artist worked from the paper’s base tone towards light using white gouache, and towards dark using ink, bodycolour (a color that lasts) or watercolour.

By and large, we no longer use coloured paper.  We use pale, usually white, paper.  However, the above description is particularly interesting in that it gives the impression that the light area has been dug out of darkness.  In the case of Charles Jacque‘s Marie, the dark areas are carved out of a white background. It is a process akin to making a cameo, or the reverse.

Let us return to Wikipedia to read that “[t]hese in turn drew on traditions in illuminated manuscripts, going back to late Roman Imperial manuscripts on purple-dyed vellum (from vélin or calfskin).”

However, more simply defined, chiaroscuro refers to the contrast between light areas and dark areas, as in Charles Jacque’s “Marie.”  Marie seems to emerge, as though dug out from the white background.  In most drawings and coloured paintings, the pale area seems nearer than the dark area. However, if only one part of the painting is lit (see El Greco), that is the part we see.

This is an etching executed by Charles Jacque, one of the “plein air” (outdoors) group of artists who called themselves the Barbizon School.

This etching is a particularly successful work of art.  I love the dark areas and marvel at the manner they are consistent with the Greek Golden Section.  By the same token, I also love Jacque’s use of chiaroscuro (clair-obscur).  Look at the play of light defining Marie’s hair and the sleeve of her dress.

Moreover, it had not occurred to me that one could use china to produce etchings.  China is fragile, but why not?

An engraver & a Beast Artist

Charles-Emile Jacque (23 May 1813 – 7 May 1894) served in the military for seven years and, during that time, he engraved maps.  For those engravings, Jacques probably used copper.  So he is known as both a painter and an engraver, but as a painter, he is a beast artist, un peintre animalier.

He joined members of the Barbizon School when he fled to Fontainebleau to escape an epidemics of cholera devastating Paris.  The days of cholera were very much like the days of the plague.  One had to avoid contamination, so flight was the only option.  But it was not an option available to all.

Jacque is also one of the Barbizon artists who painted “plein air” reality, but also painted portraits, as did Camille Corot.

The influence of Dutch Masters

Charles Baudelaire, the author of Les Fleurs du mal (The Flowers of evil) noticed in Jacque’s works the characteristics of the Old Masters (Dutch).  This is not surprising since Jacque had made several engravings based on the works of Dutch Master Adriaen van Ostade.  Adriaen van Ostade (c. 1610 – 1685) was a “Dutch Golden Age painter of genre works.” (Wikipedia).

“Genre works” depict scenes and events of every day life.  Such was the aim of members of the Barbizon School, in their paintings and other renderings of landscapes and farm animals.   However, to make a living, Jacque also illustrated books.  Illustrating books is an artist’s way of putting bread on the table.  There are other ways.  As a boy, Auguste Renoir, who was born in Limoges to a poor family, painted porcelain.

As for Jacque, he was an illustrator.  Among other works, he illustrated the Vicar of Wakefield, by Oliver Goldsmith; the Works of Shakespeare; and Ancient and Modern Versailles, by Alexandre de Laborde.  If sufficient creativity is afforded an illustrator, illustrating books can be a particularly satisfying way of making a living .

But just imagine the pleasure of combining writing and illustrating, as was the case with William Blake.  Blake did not have to please an employer which gave him freedom and gave the world powerful images.

Charles Jacque’s most horrible moment must have been the execution of his son Lucien, a communard.  Twenty-thousand communards were executed during what is called the bloody week, la semaine sanglante: May 22 to 28, 1871.  France had been attacked by Germany (1871), so the communards were governing Paris, la commune.

But Jacques survived until 1894.  He had other children.  And, of immense importance, he had his art. 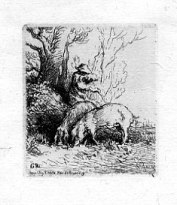