This is probably my last post on the subject of the Pléiade, but there is one story I would like to share with you, that of the Académie de poésie et de musique founded, in 1570, by Jean-Antoine de Baïf and Joachim Thibault de Courville, under the auspices of Charles IX.  Royal patronage could explain why the Académie de poésie et de musique is considered the first Académie to be founded in France.

In theory, members of the Académie attempted to write verses measured in the same manner as Greek verses, vers mezurés à l’antique.* The Académie‘s endeavour was perfectly legitimate and encouraged by Ronsard himself.  However, members met in such secrecy that it would not be unreasonable to suspect a Huguenot connection.

*There was and may still be a Baïf font for Mac computers.

Jean-Antoine de Baïf (Venice, February 1532; Paris, 19 September 1589), the co-founded of the Académie, was the natural son of diplomat and Hellenist Lazare de Baïf.  We have no information on Jean-Antoine’s mother.  Jean-Antoine was raised by his father.

Lazare was a good father.  He provided his son, at a very early age, with the best teachers he could hire.  In fact, in 1544, after Lazare had returned to Paris, he had his son and his secretary, Pierre de Ronsard, now nearly deaf, educated by Dorat or Doraut, who would become principal at the Collège de Coqueret and was later appointed as professor at the Collège de France, established in 1530.

Pierre de Ronsard was Jean-Antoine’s senior by eight years and at the Collège de Coqueret they met Joachim du Bellay and Pontus du Tyard, Dorat’s pupils and both future members of the Pléiade.  Ronsard, the “prince of poets,” and Du Bellay are the co-founders of the Pléiade.  Jean Dorat, one of Europe’s most prominent Hellenists, also became a member of the Pléiade and was, in fact, the group’s mentor.  The Pléiade consisted of seven members.

Among members of the Pléiade, Baïf was probably the only poet who was also a musician.  His goal in founding the short-lived Académie de poésie et de musique was, as mentioned above, the creation of poetry and music that would be measured in a manner resembling Greek versification. 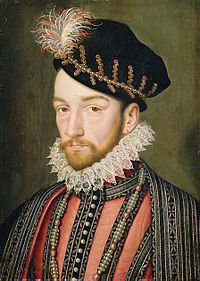 Catherine de Médicis’s incited her son, King Charles IX, to order the Massacre of the St. Bartholomew’s Day (August 24th [early morning], 1572).  In fact, she plotted the entire event.  The massacre lasted several days and spread to the provinces.  Thousands of Huguenots were slaughtered. Young Charles IX, then 22 years old, barely survived the atrocities.  He was emotionally devastated and physically weakened.  He died in 1774, probably of tuberculosis.

When Charles IX died, Ronsard, who was supportive of ‘vers mezurés,’ left his rooms at Court.  As for the Académie de Poésie et de Musique, members continued to meet and they received encouragement on the part of famed poet Agrippa d’Aubigné, a Protestant who had left France several years before the St. Bartholomew’s Day Massacre, but the Académie had nevertheless entered a period of decline.  It was revived briefly as l’Académie du Palais, under Henri III, Charles IX’s brother.

Le Jeune wrote ‘Parisian’ songs, using metrical verses, but also composed madrigals and motets.  Moreover, as a Huguenot, he contributed metrical psalms to the Genevan Psalter, published after his death in 1600.

As for Jacques Mauduit, he is the composer of the masterful Requiem (please click to hear) played at Pierre de Ronsard’s state funeral in 1585.  Mauduit and Du Caurroy were composers of polyphonic music, or music using many voices.

Massacre of the St. Bartholemew’s Day

It remains nevertheless that the premature death of Charles IX, dealt a nearly-fatal blow to the Académie.  Moreover, members were not particularly successful at producing vers mesurés in poetry.  Set to music, however, vers mesurés or metrical psalms were quite pleasant.  So, there is a sense in which Antoine de Baïf experiment was successful, but not for long.  The air de cour became fashionable.

As for Antoine de Baïf, in 1574, he published his Etrénes de poezie fransoèze en vers mezurés (“Gifts of French Poetry in Quantitative Verse”).  As well, in 1586, he composed the lyrics of songs in Greek metrics: Chansonnettes mesurées. The music was written by the above-mentioned Jacques Mauduit, a member of Baïf’s Académie de Poésie et de Musique, the Académie’s foremost musician, and, as I mentioned above, the composer of the Requiem played at Ronsard’s state funeral.

Given its secrecy, the Académie may have been a refuge for Huguenots, but we may never know for certain.  We know, however, that Baïf wrote a long poem commemorating the St Bartholomew’s Day Massacre and that, although he had taken minor orders, Ronsard saved Claude Le Jeune’s life, as did Antoine de Baïf.  But most eloquent of all, is Ronsard’s Discours des misères de ce temps (1562), Discourse on the Miseries of These Times.

In poetry the “vers mezurés” were not very successful.  French is a “flat” language. Stressing syllables other than the last sounded syllable of a word made poems sound unnatural.  But vers mezurés à l’antique had their moment of grace in the history of music. 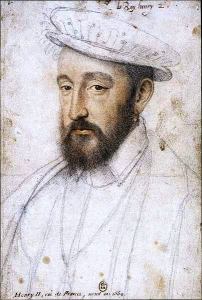 In my blog on Machiavelli and Reynard the Fox, I pointed to the ruthlessness of the Medici family, but left aside Caterina deʼ Mediciʼs hatred of French Protestants and her Machiavellian behaviour.  The St. Bartholomewʼs Day massacre was Catherineʼs idea, but only her son, King Charles IX, could and did order it.  When he witnessed the bloodshed, his already fragile mental health suffered such a blow that he did not recover and died two years later, in 1574.  The St. Bartholomew’s Day massacre claimed at least 5,000 lives in Paris.  But it also claimed lives outside Paris.

This is the kind of actions, though on a smaller scale, that Machiavelli was aware of, and saw, hence his praise of the zoomorphic, half human, half beast, Centaur.  The Centaurʼs beastial half could be useful to his prince as could the crafty Fox, born as Reinardus in Nivard de Gandʼs Ysengrimus a lenghty Latin beast epic (1149).

However, we will concentrate on Reynard in a future blog.  At the moment, it would suffice to focus on the Huguenots, or French Calvinist Protestants.  The French were beginning to consolidate their monarchy to make it an absolute monarchy.  Richelieu would be its main architect, but absolutism meant one king, one language, one religion, a concept embraced by Catherine de Médicis.

Henri IV, who sympathised with the Huguenots, had to convert to Catholicism to become the King of France.  He is remembered for saying that Paris (kingship) was well worth a mass:  “Paris vaut bien une messe.” Henri was an excellent king, but he was murdered in 1610, when his son, the future Louis XIII was still a child.

A few years earlier, in 1598, Henri IV had signed the Edict of Nantes, which gave the Huguenots a respite, but one that did not truly survive the assassination of Henri IV.  In theory, the Huguenots were safe and inhabited safe places, such as La Rochelle.  But we know about the Siege of La Rochelle.  It reaped the lives of approximately 24,000 Huguenots who were simply starved to death by Richelieu, a regent during the Louis XIII’s childhood but who remained a ruler during part of the reign of Louis XIII.

Mazarin, who was a ruler, also a regent, during the reign of Louis XIII, and Louis XIV were tolerant of Huguenots, but ended up revoking the Edict of Nantes, in 1685

The Révocation de l’Édit de Nantes led to an exodus.  Huguenots fled to the Low Countries, England, the future Germany and elsewhere.  However, as they fled, those who were caught were tortured in the cruellest of manners.

It was an important chapter in the history of my family.  However, my sister Diane, an excellent genealogist, tells me that three Bourbeaus left France, which means that Suzor-Côté’s* Bourbeau paintings depict the home and surroundings of a third Bourbeau, my maternal grandfather’s father whose ancestry Diane has sent me, but it remains unexplored, but who was a Huguenot who converted to Roman Catholicism in order to remain in Canada.

* This is a French-language Wikipedia site, surrounded by English-language sites.

Among Huguenots slaughtered on St. Bartholomew’s Day massacre was composer Claude Goudimel, an innocent man.  All were innocent persons.  Many Huguenots settled along the St. John’s River, in the United States.  I must find out a little more.

I have never understood cruelty, especially cruelty perpetrated in the name of a religion.