Yes, Quebecers voted, and it was a landslide victory, 74 out of 125 seats, for François Legault the leader of a party named Coalition Avenir Québec. “Avenir” means future. The moment I entered the voting room, I was told by a young couple that we had no choice. We had to elect François Legault, they said. I was voting for the Liberal candidate.

In other words, Dr Couillard was ousted. I have long supported the Liberal Party. Voting for the Liberals means opposing separatist Parti Québécois and supporting our precious social programmes. A Parti Québécois victory could mean division in Canada. Having lived in every part of this country, I want Canada to stretch from coast to coast: A Mari usque ad Mare. Coalition avenir Québec has ties with the Parti Québécois, but it is not planning to leave the Canadian Confederation. Is this something I should believe?

I’m sad to see Dr Couillard leave us. I agree that changes are needed. We have an example: the parking fee at hospitals, hospices, and CLSCs, Centre local de services communautaires or public clinics. Will they go up or will they be abolished? They may go up.

As you know, the citizens of Sherbrooke must pay a substantial parking fee if they go to a hospital or to a CLSC. You may remember that I cried as I stood in one of several queues of people who had to pay parking fees using machines they could not operate. It was a terrible day.

Let me give you an update.

A few weeks ago, I read that elderly patients living in hospitals or hospices were not being looked after properly. A little later, I read that members of the staff of Sherbrooke’s hospitals and hospices were leaving their position at an unexpectedly rapid rate. So, I thought, could it be the parking fee?

When my mother went into an institution, my father and other members of the family helped her eat her dinner, the noon meal. For my part, I visited after 3 pm (15 hours). We talked, and I helped her eat an early supper and then helped get her ready for the night.

There was a lot to do. She had to be suspended in a net hanging from the ceiling while the bed was changed. I used to tell her that she was lucky to be in an airplane. “Is that an airplane?” she would ask. “Of course, mother. You are in mid-air, like a bird, while the rest of us must stand on the ground.” She was then put into a fresh gown. “Would you believe mother that I have to get dressed all by myself?”

Given the current parking fees, are families helping mothers, fathers and their sick relatives who are in an institution? If the staff is quitting, I suspect that families no longer visit once or twice a day. They probably visit once or twice a week, perhaps less. Many Quebecers and Canadians are poor. They cannot afford to spend several hundred dollars a month in parking fees.

My brother will be going back and forth from a hospital bed to his home. Members of my family will therefore be feeding those machines a significant amount of money and our contribution to the “Foundation” will not be tax-deductible. But think about the mothers, fathers, the disabled and other patients who will seldom see their family because of the parking fee.

Shame on those societies that have allowed the cost of living to rise to a point where one can say that life is literally “unaffordable.” Are we being told no longer to have children? The large red-brick house of my childhood did not have hot water, and we had to feed an old furnace. But the house belonged to my father’s employers, it came with the position, and we did not have to pay rent. We were secure.

I know very little about monsieur Legault, but I hope he realizes that the humble among us need help and that the sick and the elderly who are confined to a bed for years require the support of their family. We saw my mother twice a day, seven days a week for the three years she spent in an institution hoping she could go home. The day she died, her lips had to be kept moist. I told the staff that I could do this and that I would not leave until she died. She was going home.

According to Alexandre Taillefer of the Huffington Post, monsieur Legault is a threat to social peace: “une menace à la paix sociale.”

I have also looked at pictures of monsieur Legault former house.  It was on the market in 2015. I think his house is the first house we are shown.

To keep us close to the ground, I have inserted art by Robert Savignac. My niece Marie-France and Robert’s brother are a couple. They have four children, now young adults. Robert paints happy and sunny environments. 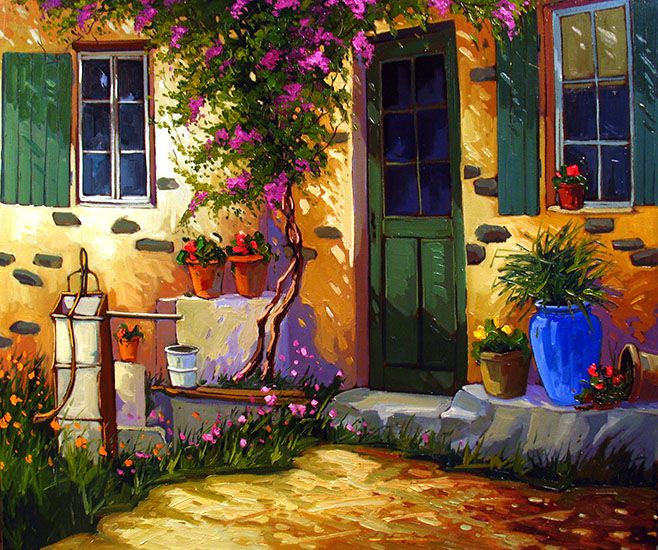 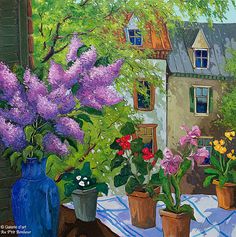