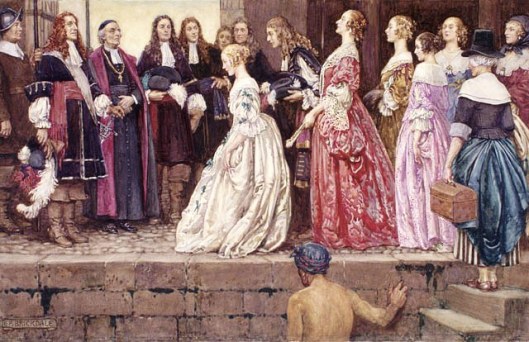 My colleague tkmorin has written about the Filles du Roy, the King’s Daughters, women who were sometimes considered filles de joy.  Between 1663 and 1763, some 500 to 900 women were sent to New France (Nouvelle-France) so men did not have to marry Amerindian women.  Doubt lingers about these women.  Some are considered filles de joy: filles du roy, filles de joie.  However, my colleague is right, these women came from convents and, once they arrived in New France, they were trained to be “good wives” to settlers by Ursuline sisters, in Quebec City, and sisters of the Congrégation de Notre-Dame, a Montreal religious order founded by Marguerite Bourgeoys.

Allow me to add a note on this subject.

In seventeenth-century France, it was of the utmost importance for the nobility to be in Paris.  France was ruled not by Dukes, the highest rank among the nobility, and other aristocrats, but by chief ministers: Richelieu (9 September 1585 – 4 December 1642) and Mazarin (14 July 1602 – 9 March 1661).  Aristocrats therefore feared losing power.  Consequently, they lived close to court and they rebelled.  La Fronde (des nobles and des parlements) was a series of civil wars that took place in France between 1648 and 1653.

To be seen by the king

Aristocrats therefore made sure they had a home in Paris as well as a carriage and fine horses.  They wore clothes that had been purchased from the “bonne faiseuse,” (designer clothes or the right brand of clothes [faiseur; faiseuse: maker]) so they would be allowed at court.  The term “bonne faiseuse” is used in Molière’s Précieuses ridicules (18 November 1659).  Louis XIV lived publicly and according to a protocol.  It was a privilege for courtiers to be present when Louis got up in the morning, le petit lever et le grand lever, and when he went to bed: the petit coucher, le grand coucher.

Therefore, as mentioned in an earlier article, the seventeenth century saw a gradual impoverishment of France’s aristocracy, which made it increasingly difficult for the nobility to provide dowries for several daughters.  Moreover, there were affluent bourgeois who wanted a daughter to marry an aristocrat so they would leave the bourgeoisie, but could not afford to endow more than one daughter.  Impoverished aristocrats marrying middle-class women did so in order to live in a style befitting their rank.  In fact, marrying the right bourgeois could also be very expensive.  Many were rich and some, very rich.

Molière’s Bourgeois gentilhomme, The Middle-Class Aristocrat (10 October 1670), provides a fine example of a bourgeois, monsieur Jourdain, who wants his daughter to marry an aristocrat so he will be an aristocrat.  In order to marry Lucille, Jourdain’s daughter who loves him, Cléonte has to stage a turquerie, a play-within-a-play designed to fool monsieur Jourdain into believing his daughter is marrying the son of the Sultan of Turkey.  We already know about turqueries.

For many of these young women, relegated to a cul de couvent, the hellhole of a convent,[i] going to New France was their chance to live a normal life.  So far from being filles de joie, some filles du roy were almost literally filles du roy.  Others were the daughters of a bourgeois who had paid so dearly for marrying a daughter to an aristocrat or an affluent bourgeois that other daughters had to enter a convent or marry “sans dot,” without a dowry, a husband who may not have been of their choosing.  Moreover, there were poor bourgeois and orphaned or illegimate daughters who also had to be given an inexpensive roof: a convent.

So the Filles du Roy were not filles de joie.  They came from convents.  What they did not know is that they would live a difficult life in New France as would, two hundred years later, English-Canadian Susannah Moodie (6 December 1803 – 8 April 1885).  When I first read Margaret Atwood‘s Journals of Susannah Moodie, I thought of the filles du roy.