[O.S. 24 July]:  O. S. means Old Style.  There is a discrepancy of twelve days between the Julian Calendar and the Gregorian calendar, introduced in 1582.  For instance, according to the Gregorian Calendar, Christmas occurs on the 25th of December, the date closest to the longest night, but in the Eastern Church the Nativity is celebrated on January 6th, twelve days later.  On that day, the Western Church celebrates the rapidly disappearing Epiphany.  So, when you see O. S., add twelve days to switch from the old style to the new style.

In my last blog, I noted the existence of a site containing Russian and Canadian art.  I have since been exploring Russian Art.  I have discovered a picture of rafts of wood in rivers.  Does this mean there were Russian draveurs as in Félix-Antoine Savard‘s Menaud, Maître-Draveur, men who risked their lives driving rafts or cages of wood down rivers, like the Canadian raftsmen? 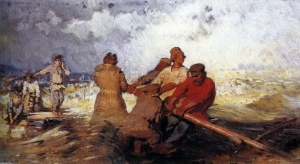 As for the Barge Haulers of the Volga, to a certain extent, they resemble the Canadiens voyageurs who were at times spared a painful  portage by standing on the two sides of a waterway hauling canoes.  But the boats the Volga River boatmen pulled were extremely heavy.

I have also seen villages and towns that are quite similar to Canadian and particularly Quebec villages and towns.  A church stands at the centre, above other buildings, except that the pointed clochers (steeples) of Quebec villages are onion domes or steeples in Russia or pear-shaped domes, in the Ukraine.  But these domes, sometimes swirly in shape, are also found in other countries, Bavaria for instance, and on various buildings, including the Vatican,  the

Basilica Cattedrale Patriarcale di San Marco, in Venice, other basilicas and churches, the United States Capitol, etc.  They are mostly of Byzantine and Greek origin.  The Byzantine Empire fell to the Ottomans on 29 May 1453.

But to return to our Russian villages and towns, the church dominates the landscape, because of its clocher, as it does in Quebec villages and small towns.

I am not including the news.  But I have chosen to insert Bulgarian bass Boris Christoff‘s (18 May 1914 – 28 June 1993) interpretation of the Song of the Volga Boatmen.