A bestiary is a compendium of beasts most of which have identical characteristics from bestiary to bestiary. In Europe, bestiaries are mostly a product of the Middle Ages, the 12th and 13th centuries in particular. Exceptionally beautiful are the Aberdeen Bestiary  MS 24)  and the Ashmole Bestiary (MS 1462 & MS 1511), both dating back to the late 12th and 13th century.

They are illuminated manuscripts and, in this regard, resemble books of hours. They therefore contain images complemented by superb calligraphy that could vary from bestiary to bestiary, some of which are ancestors to our “fonts.”

Bestiaries were usually transcribed by monks in a scriptorium, a recess in a wall, and were executed on vellum (calfskin) or parchment (calfskin, sheepskin or goatskin). Both the Aberdeen Bestiary (MS 24) and the Ashmole Bestiary MS 1462 (Bodleian Library, Oxford) were written and illuminated on parchment. However, the Ashmole Bestiary MS 1511 (Bodleian Library) was executed on vellum.

Not all animals described in bestiaries are real animals. The authors of natural histories often relied on information obtained from individuals who had travelled to the Orient or elsewhere. Thus was born the unicorn. The rhinoceros is a real animal that has one horn, but the unicorn, the monocerus in Greece, is a both an anthropomorphic and zoomorphic animal.

Zoomorphic animals combine the features of several beasts and may be part human and part beast. Such is the case with centaurs and the minotaur. The lower half of a centaur is a horse, the upper, a man. The minotaur’s body is human, but its head is that of a bull.

The Physiologus: the main Source

The best-known “natural history” is the Physiologus (“The Naturalist”), written in Greek in the 2nd century BCE. Authorship of the Physiologus has not been determined, but it was translated into Latin in about 700 CE, our era. It was the main source of information for persons who wrote and illuminated bestiaries.

The Physiologus described an animal, told an anecdote about that animal and then gave the animal moral attributes (See Physiologus, Wikipedia). In the Medieval Bestiary, the anecdote for dogs was “The Dog and Its Reflection.” Natural histories, however, made animals allegorical rather than humans in disguise. The Physiologus is allegorical and emblematic, but in structure, it resembles the fable.

Professor Ziolkowski[i] writes that the

fable consists of a narrative with a moral, Physiologus of nature observation with moralization.

In the case of dogs, the Medieval Bestiary (http://bestiary.ca/) describes the animal, tells an anecdote, the “Dog and Its Reflection,” and then informs readers that the dog is the most loyal of animals. The dog may be able to kill but, as the lore goes, it is man’s best friends and therefore emblematic of loyalty. We learn as well that the dog licks wounds.

According to Pliny the Elder (23 BC – 25 August 79 BCE), one of many authors of natural histories, “[t]he domestic animal that is most faithful to man is the dog.” The iconography, images, tells a similar story, but also shows us many greyhounds, as do 20th-century fashion illustrators.

So here are some pictures of faithful dogs who lived in the Middle Ages. The dog featured at the very bottom of this post is about to avenge his master’s murder, but is also a healer. The bestiary in which it is depicted is housed at the Royal Library in Copenhagen. It is an illumination (enluminures) executed on the front page, the folio, of a Bestiary. The front of the folio (the page) is called recto vs verso, the back. 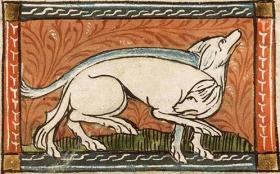 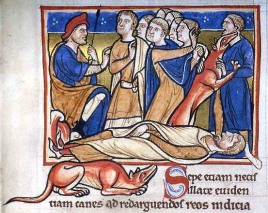 This is the description given dogs in the Medieval Bestiary

“Dogs are unable to live without men. There are several kinds of dogs: those that guard their master’s property; those that are useful for hunting wild animals or birds; and those that watch over sheep. A dog cures its own wounds by licking, and a young dog bound to a patient cures internal wounds. A dog will always return to its vomit. When a dog is swimming across a river while holding meat in its mouth, if it sees its own reflection it will drop the meat it is carrying while trying to get the meat it sees in the reflection.

Several stories are told about the actions of dogs. King Garamantes, captured by his enemies, was rescued by his dogs. When a man was murdered and there were no witnesses to say who did it, the man’s dog pointed out the slayer in the crowd. Jason‘s dog was said to have refused to eat and died of hunger after his master’s death. A Roman dog accompanied his master to prison, and when the man was executed and his body thrown into the Tiber River, the dog tried to hold up the corpse.

A dog that crosses a hyena‘s shadow will lose its voice.

Hungry dogs are used to pull up the deadly mandrake plant.” David Badke[ii]

(“Jason” and “Tiber River” are links I have added)

King Garamantes is kidnapped by enemies; the king’s dogs find him and attack the kidnappers; the king leads his dogs home. F 21v

A dog mourning the murder of its master, and possibly pointing out the murderer. F 18r, or

A young dog bound to a patient cures internal wounds

Kindest regards to all of you.